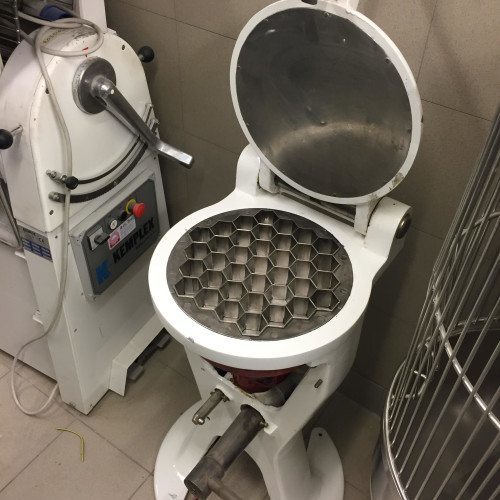 Maritozzi will be made in-house using an antique machine to portion the dough.

The Roscioli family is expanding their mini-empire in Rome’s historical center with the opening of a bar-pasticceria in the defunct Bernasconi space on Piazza Benedetto Cairoli. It’s just a few doors down from their restaurant-wine bar Salumeria Roscioli and around the corner from their historic bakery Antico Forno Roscioli. It will be called Roscioli Caffè e Pasticceria and inauguration is scheduled for early 2016.

The place will be a bar in the Roman sense, serving coffee and pastries in the morning, including maritozzi con panna (biga-based buns filled with whipped cream) and savory items like panini and tramezzini throughout the day. Pastries will be baked on site. Departing from the classic bar format, a room in the back will offer cocktails, wine, cheese, salumi, and oysters. I predict this will become a regular stop on my culinary tours of centro.

Another novelty: they are actually prioritizing coffee, a rarity in Rome where industrial beans and filthy machines are the norm. Bar Roscioli is collaborating with Gianni Frasi of Verona’s Torrefazione Giamaica Caffè, one of the few valid coffee roasters operating in Italy. His coffee is special and thoughtful and delicious. I took a spin through the bar-in-progress with Pierluigi Roscioli a few weeks ago and, while I was most excited about the antique maritozzo press above, he was proudest of a machine beside the coffee maker which will clean the portafillers (those basket things with the handle the ground coffee goes in) after every use. That means Frasi’s expert roasting will be properly transferred to your cup and Rome actually gets to drink coffee that doesn’t taste like burning.

While some might lament the demise of Bernasconi, which opened its doors in 1923 and was super old school and atmospheric, I’m ok with fourth generation bakers taking over and trying to raise the bar (pun intended).