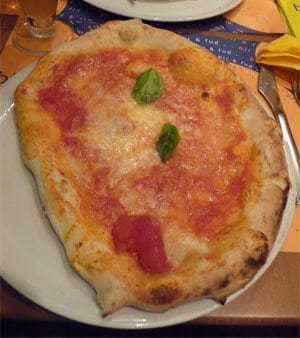 Last week I went to the much-hyped Bir & Fud in Trastevere for the first time. I had high hopes for this place, a pizzeria that prides itself on its use of the highest quality ingredients and which some claim is among the best in Rome. I expected to find excellent Neapolitan style pizza there but, as is generally the case for trendy spots, Bir & Fud fell way short of my expectations. We started with a plate of BBQ chicken wings, pleasantly plump pieces caked with a dry breading with the sauce on the side. It was necessary to down and entire half pint of beer to avoid choking on the chalky crust. A caprese salad followed, made with a rich buffalo mozzarella from southern Lazio, tomatoes, basil, and olive oil. This was to be the meal’s highlight. This was a dish that involved little preparation on the part of Bir & Fud’s kitchen, which is why it was successful.

Next came two pizzas: a margherita and a margherita doppia (the classic pie finished with uncooked buffalo mozzarella). In both cases, the tomato sauce’s sharp acidity* totally overpowered the mozzarella we enjoyed so much in the caprese and oddly distributed overly abundant meaty chunks of tomatoes further masked the flavor of the cheese. And as if this amateur mistake wasn’t intolerable enough, my margherita was so strangely misshapen (see above), for a moment I thought they had mistakenly served a calzone. When I realized it was simply a sloppily formed pizza, I considered asking for the missing quarter.

Bir & Fud lacks both the quality product and the atmosphere of a Neapolitan or Roman pizzeria. I admire any Roman restaurant’s attempt to use high quality ingredients in an age where, unfortunately, this is not a given. But if you don’t manage to do anything decent with said ingredients, I don’t really see the point. Isn’t food in Rome supposed to be about taste anymore or has it taken a back seat to hype?

*the acidity to which I refer is that of the tomatoes, not the dough.