Back in Bozcaada, Turkey 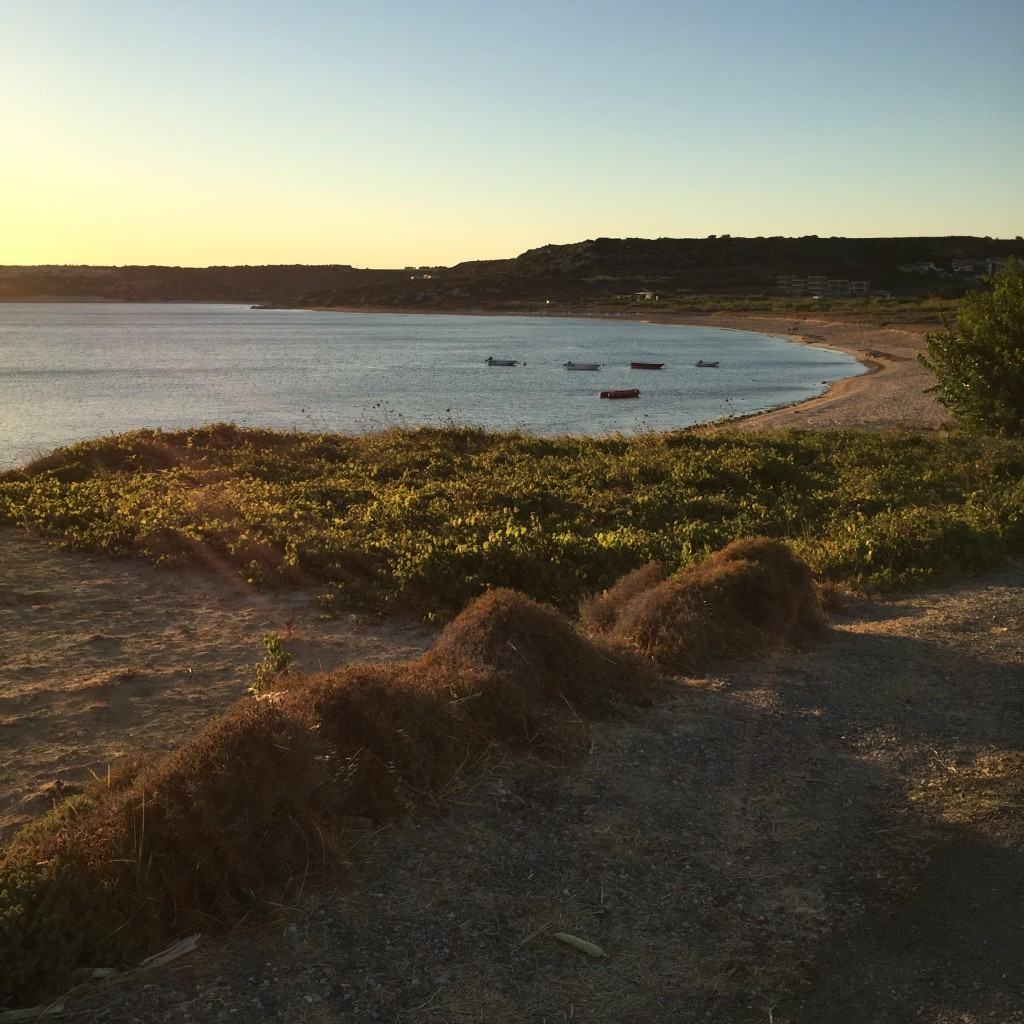 It’s been a minute since I last visited Bozcaada, the Greek-turned-Turkish island just southwest of the Dardanelles. It’s a longer trip from Istanbul than I remember: 8.5 long hours on an overnight bus that trims the Sea of Marmara, arching counterclockwise from Istanbul’s Alibeyköy depot, followed by a lay-over at the Geyikli port before the 35-minute ferry ride to Bozcaada’s main village. 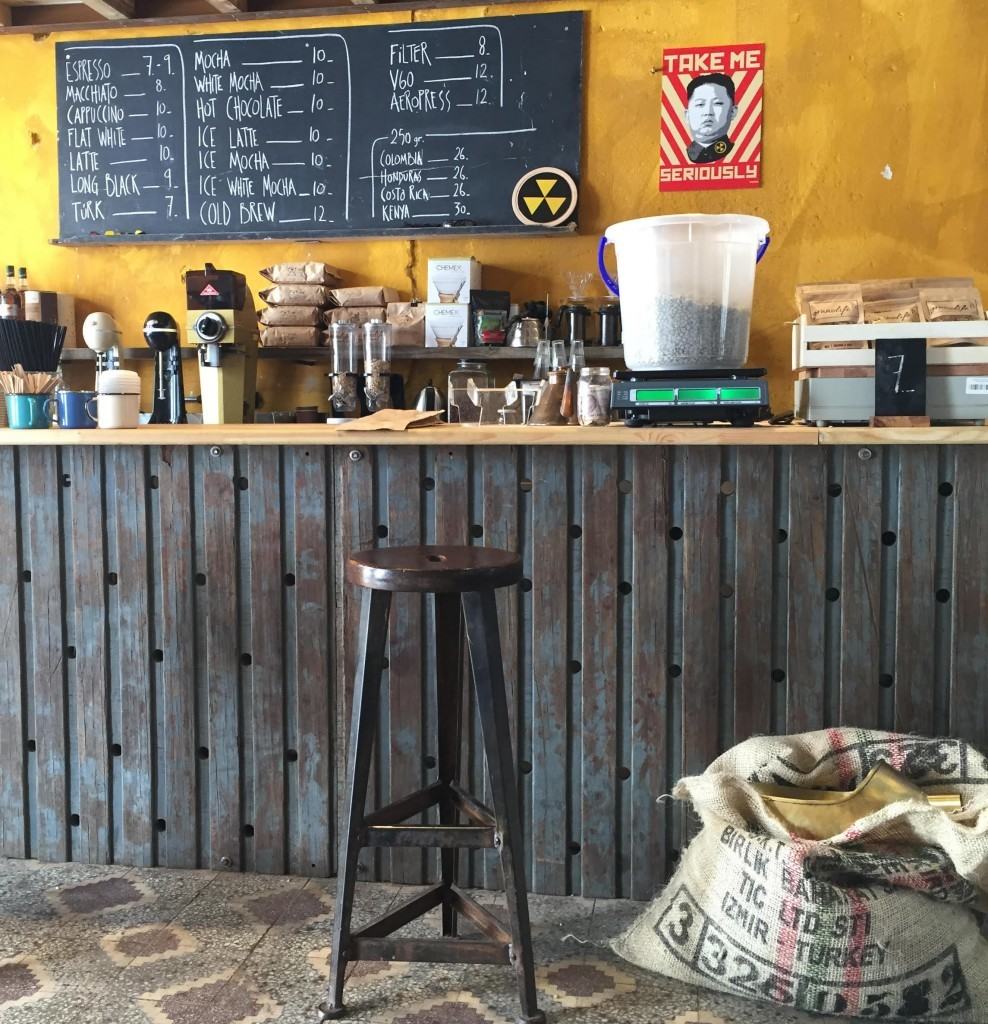 After this intense, sleepless journey I found the island (mostly) unchanged. The weekly bazaar has moved; there are a few more tourist-oriented shops touting local specialities like wine, pekmez, mastic cookies, and tomato jam; there’s a hipster coffee shop and roaster called Coffee Shelter (pictured above; the cold brew is delicous); my previous accommodations, the delightful Kemerbağ 29, has added a few more rooms; some restaurants have closed while others have opened or changed formats. But unlike other Turkish summer destinations I have visited, Bozcaada retains its sense of self and even the awful group tours of day-trippers from the mainland haven’t spoiled the pleasant old town. 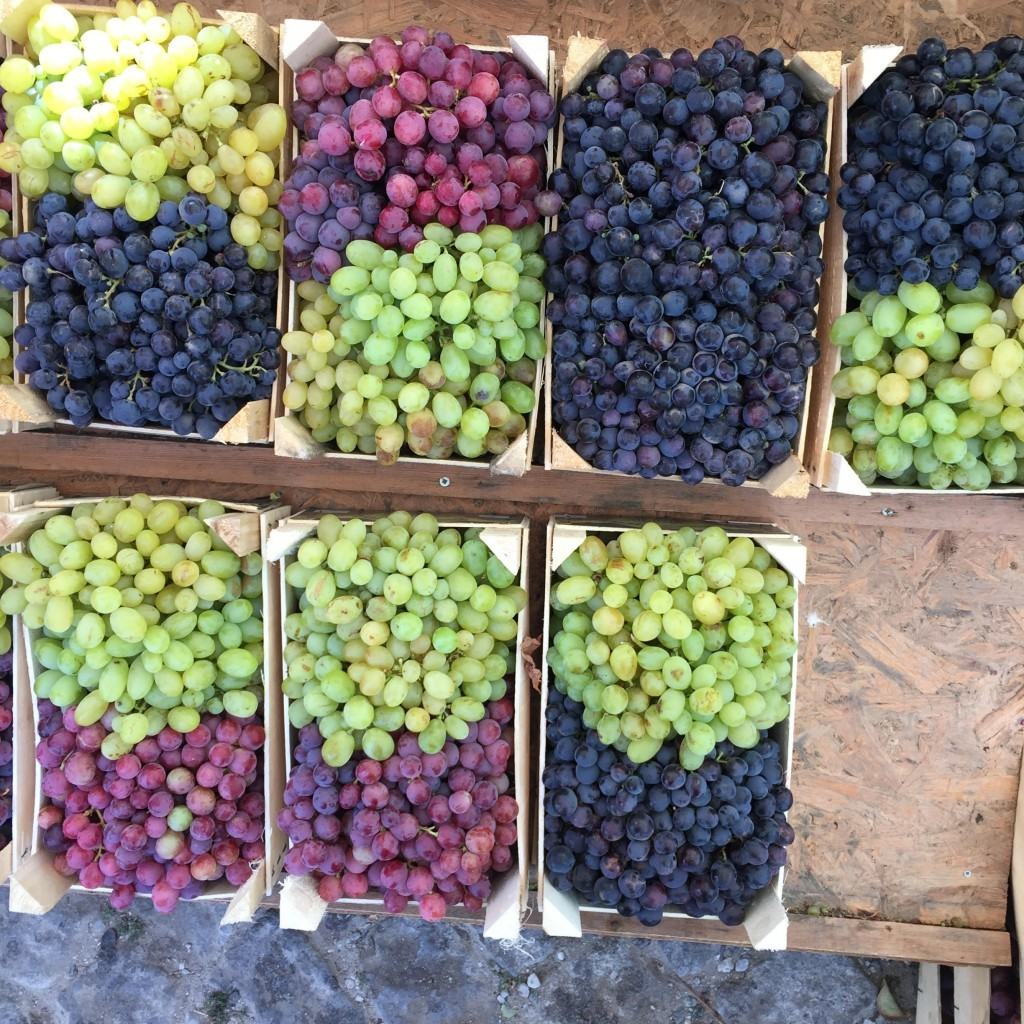 Upon leaving the port village, the aroma of maturing figs, lavender and rosemary mingle in the persistent winds that help shape the island’s character. Funneled through the Dardanelles, which connects the Sea of Marmara to the Aegean, the winds repel all but the most committed travelers in the winter and attract relatively small numbers of them in the spring and summer. And they help create an environment far different from the mainland: breezy, pleasantly warm and dry, ideal for cultivating white grapes.

This 15-square-mile island, mostly populated by vineyards and farmland, offers solitude with a dash of wine culture absent from most of Turkey (I’m reminded of a trip to Elazığ during which the vineyard I visited with friends asked us not to post our visit on social media so they wouldn’t be targeted by local conservative factions and accused of promoting alcohol consumption).

Vineyards undulate from the edge of town to the coasts, interrupted by occasional clusters of houses or tomato patch or a hotel. Many residents produce their own wine in small batches and, despite obstacles to commercial production — a dearth of labor, high taxes on alcohol and distant wine-drinking cities — several producers are turning out nice wines. 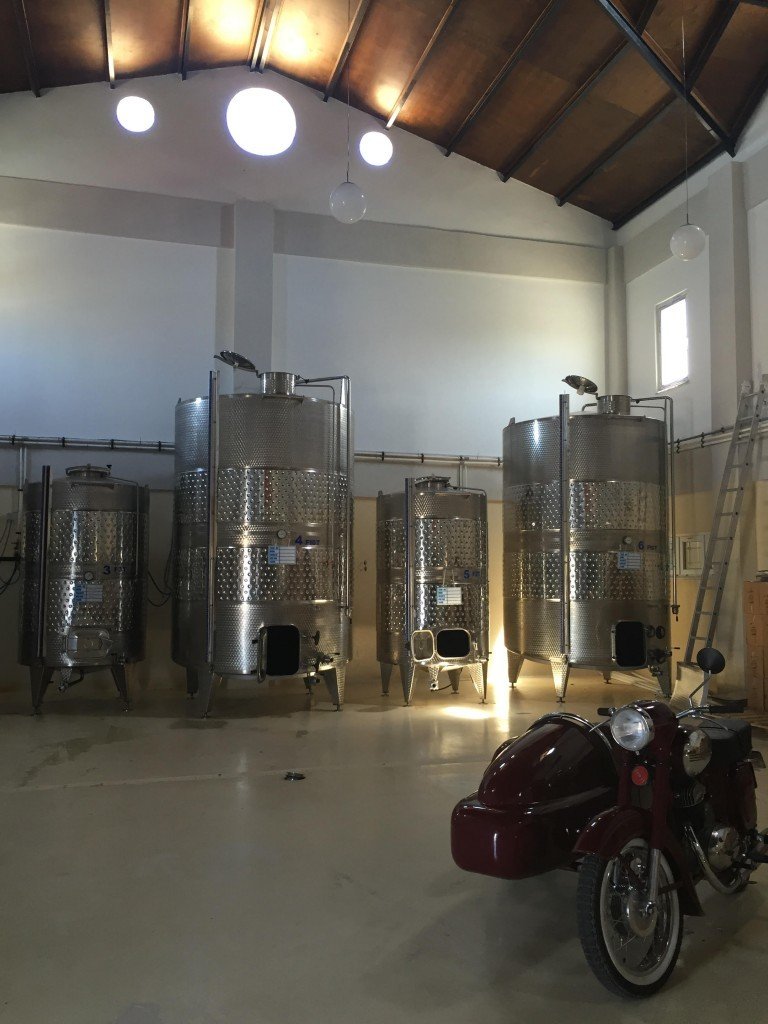 My friend Oliver Gareis and his father Hermann make white, rosé, and reds under the Amadeus label, which was born in 2010. Under the tutelage of an Italian enologist, the Gareis family has planted international grapes, including Grillo, which pairs wonderfully with the island’s vegetable and fish mezes. You can buy their wines in the Amadeus shop in town or visit their wine bar, Mozart, located in front of vineyard headquarters a short distance from the port village.

Across the island, Reşit Soley of Corvus put the island on Turkey’s wine map back in 2002, introducing modern wine producing techniques to the island, as well as a number of international varieties. Today the winery turns out more than 20 different wines and has international acclaim. But Corvus did not make Bozcaada famous. The island has a past much grander than its modest stature suggests. Its strategic location in the Aegean, meant that Bozcaada was often contested land. The island, known to the Greeks as Tenedos, had supporting roles in the mythical Trojan War, the actual centuries-long Venetian-Ottoman conflict, and the Gallipoli Campaign during World War I. In 1923, the Treaty of Lausanne turned the island over to Turkey. 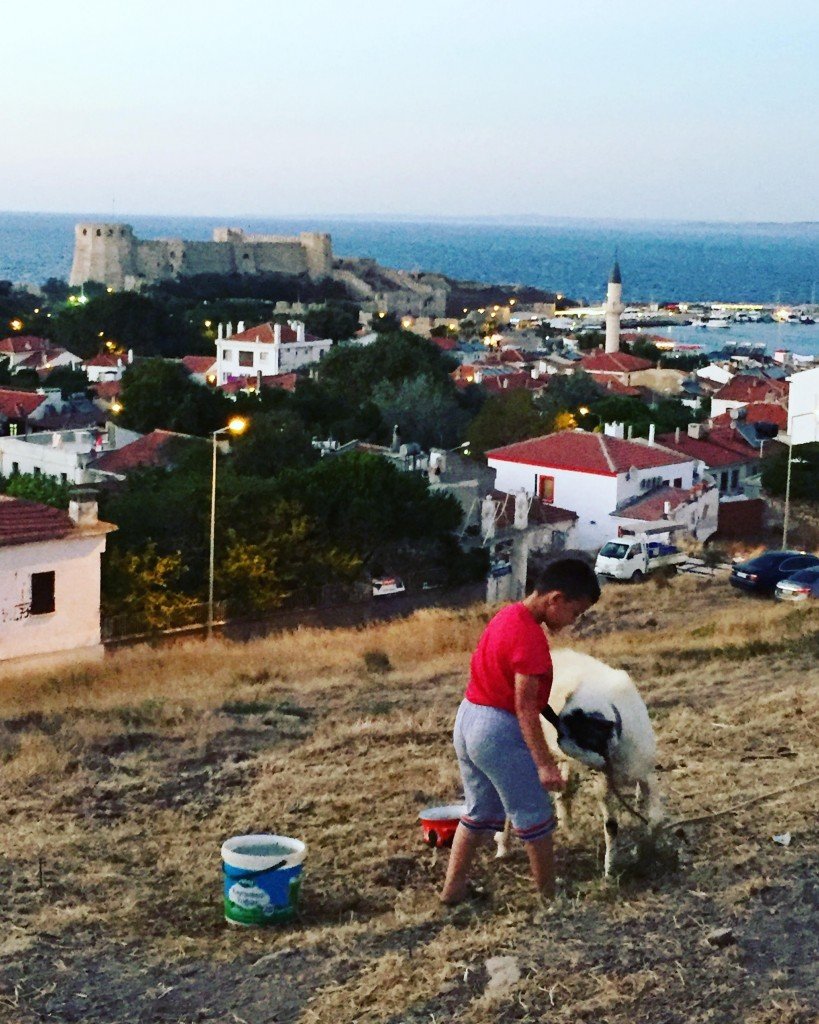 What remains after hundreds of years of conflict is a main village trimmed by two crescent-shaped ports and flanked by a honey-colored Ottoman fortress, one of the best preserved in the Aegean. The town center is divided into Greek and Turkish sections, referring to the groups who originally built the districts. (The island’s population, around 2,000, is now almost entirely Turkish.) Today there are around 35 Greeks left on the island, though the Greek legacy survives in Bozcaada’s architecture and cuisine; the Salto family still dutifully produces traditional jams from tomatoes, figs, and other summer produce. 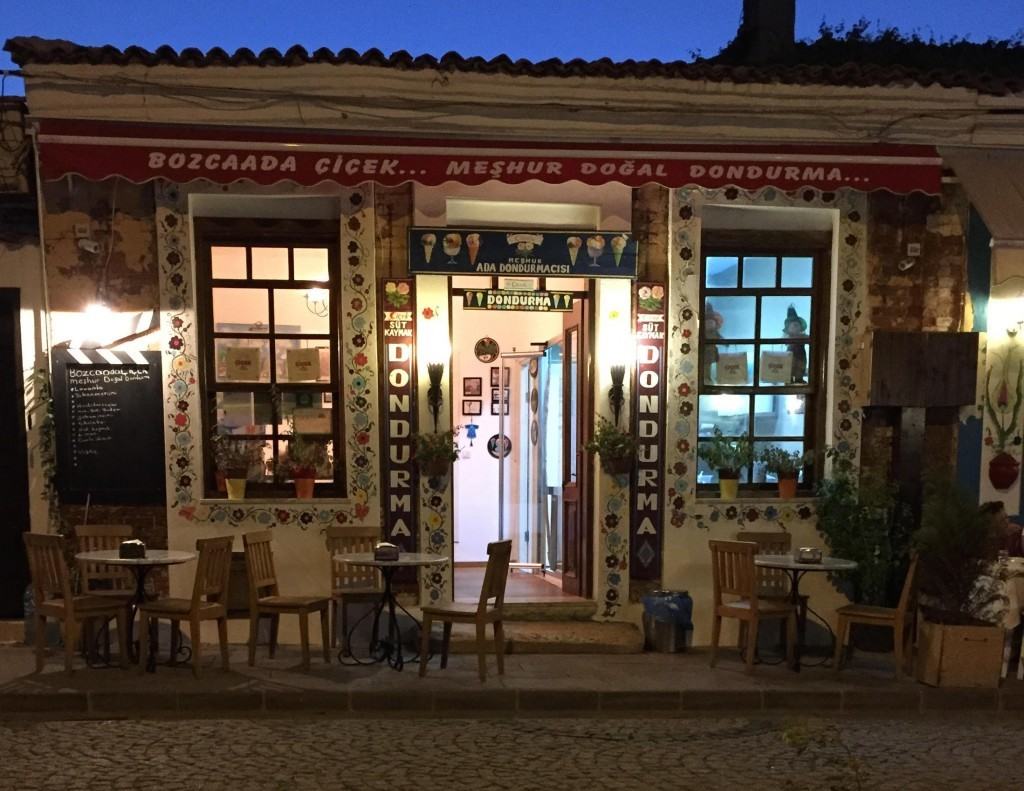 The Turkish area, a warren of houses built into an uneven slope, is mainly residential, though small hotels and shops have begun to crop up. I spent most of my evenings on the island dining and drinking in the grid-planned Greek area, where wooden homes have been converted into boutique hotels, pensions, restaurants and art galleries like that of my friends/local ambassadors Belgin and Haluk Şahin. 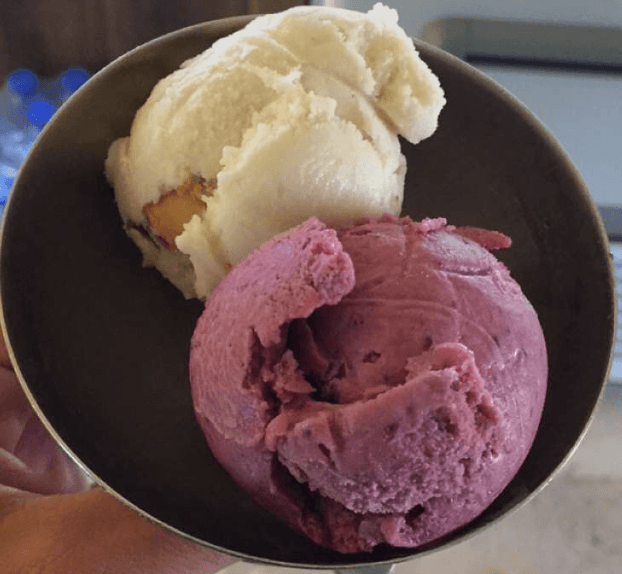 My favorite places to eat in the Greek village, Lodos and Fauna, have closed, but a new arrival, Yalova, serves excellent meze nearby. Yalova opened earlier this year and is the island outpost of the origina Çanakkale Yalova, which has been going strong since 1940. There isn’t much competition, so in a way Yalova wins by default. Most of the spots in Bozcaada do totally uninspired Aegean cuisine and I had more than a few disappointing meals. After Yalvoa, Insulares is decent. The vegetable mezes are nice and the fried calamari was the best I found on Bozcaada, but the rest of the menu is hit or miss. Historic Çiçek Pastanesi (several locations) is still going strong and their ice cream shop on the main drag serves excellent island flavors like young fig, lavander, and almond, and blackberry. 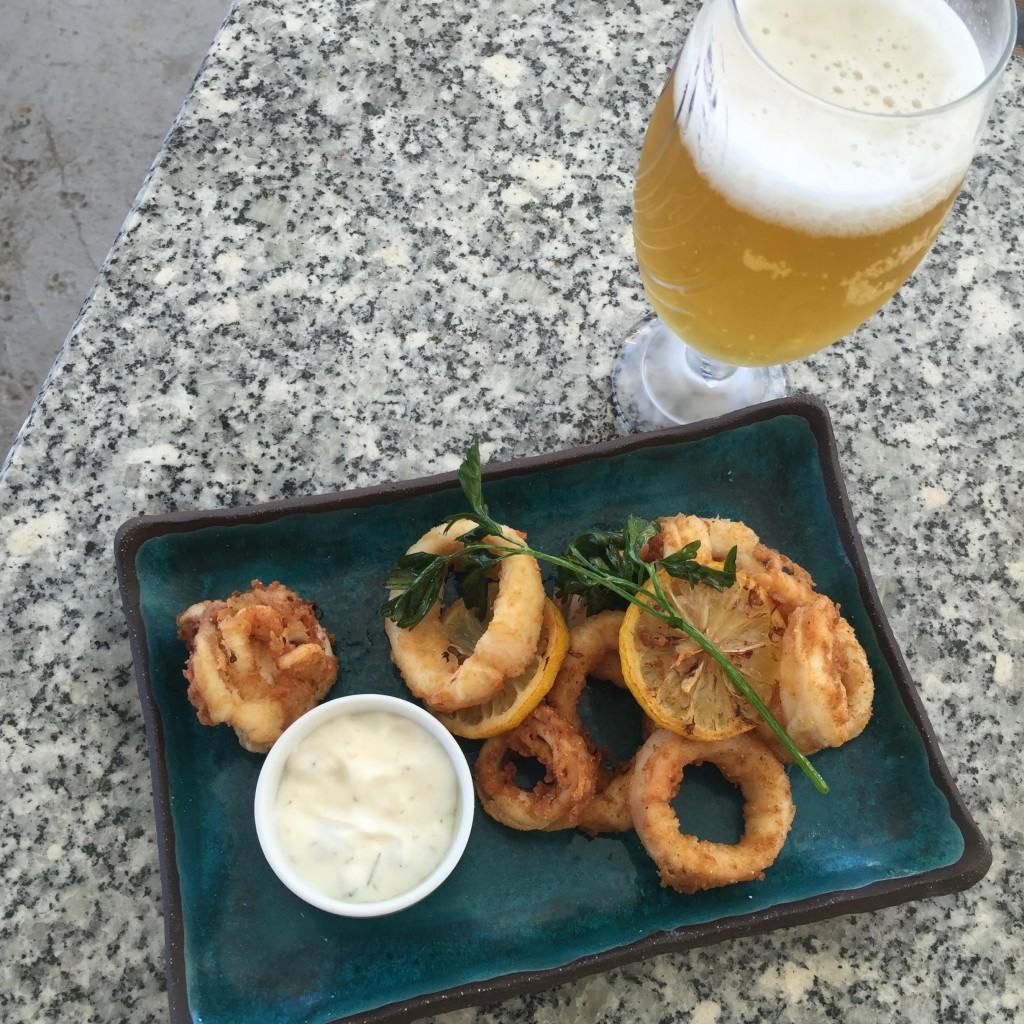 In the middle of the island, Maya, which I first encountered as a breakfast spot, now focuses on dinner. Since I get around by bicycle and nighttime cycling is a bit treacherous, I dropped by one afternoon for a chat with owners Selçuk and Evrim Aykin and tasted some of their goat cheeses and homemade wine with a side of lovely views over one of their vineyards. 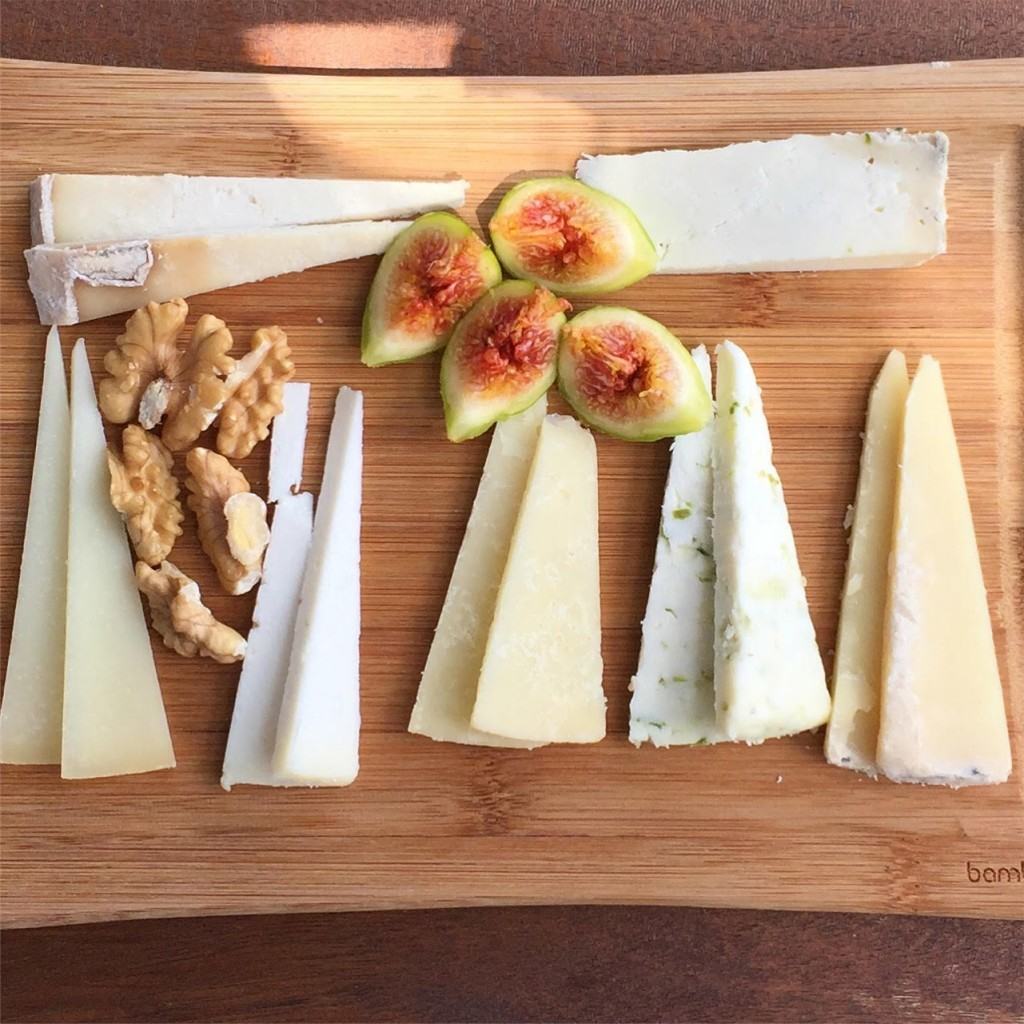 Selçuk gave me the lowdown on the island’s beaches and suggested I check out the space between Sulubahçe and Mithos, which was totally empty. There’s nothing quite like having a stretch of Aegean beach all to yourself any time of the year, much less high season. The frigid water, a constant on the island, took my breath away in every sense.