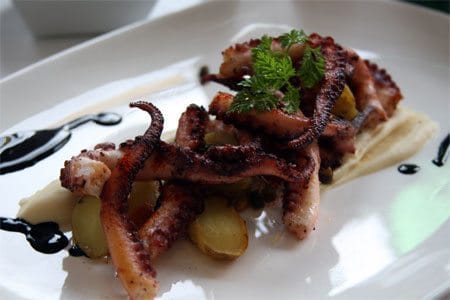 Last week I visited Caffe Falai with my friend Sarah. She had heard good things about this place’s contemporary Italian fare so we met there for lunch to try it out. Caffe Falai is the newest venture of Iacopo Falai, formerly the pastry chef at Enoteca Pinchiorri and Le Cirque. Accordingly we were excited for and had high expectations of the desserts but managed to be civilized and begin with appetizers. Sarah had mozzarella di bufala with grilled vegetables, lemon zest, and bruschetta, which she found quite good. I had the grilled baby octopus dusted with smoked paprika served with potatoes, fried capers and squid ink. The octopus was incredibly tender, the paprika complemented the charred bits nicely, and the fried capers added incredible texture and flavor. This would be the best dish overall. 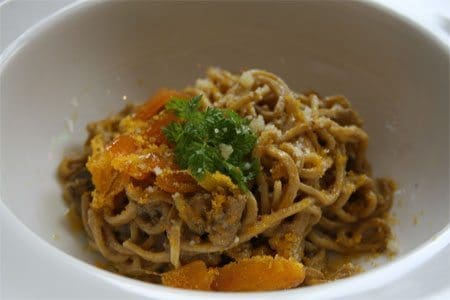 Next, we each got a pasta course. I ordered spaghetti alla chitarra with chicken liver and bottarga. I was intrigued by the possibilities of this pairing but was disappointed when the bottarga did not add the expected saltiness and flavor and really didn’t contribute anything positive to the dish. Big chunks clumped together and sat on the liver laden pasta like flaccid carrot sticks. The only thing the bottarga had going for it was its autumnal hue, which complemented the brownish pasta. Had the tuna roe been grated, the dish would have been more successful. Then the bottarga would have lent its flavor without becoming as chewy and distracting. Losing it altogether would not have been such a bad thing, either. Sarah’s gnudi were good, though topped with a silly foam cloud that I suppose was an attempt at fanciness or to add lightness too the gnudi. At just $15 a portion, they could stand to tone it down just a bit. 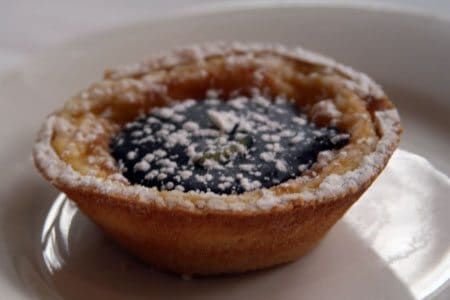 Finally, the desserts for which we had such high hopes. They had been tempting us from a large glass display case beside our table since our arrival. We settled on just two, a chocolate fondant and semolina tort. The former was a huge disappointment, a flavorless brownie dough coated in a layer of what seemed like latex. The semolina tarte was infinitely better, a dense buttery pastry shell filled with semolina crème and dark chocolate. This and the octopus were standouts at Caffe Falai. I would probably go back for these two things, and maybe even the spaghetti with chicken liver, hold the bottarga.