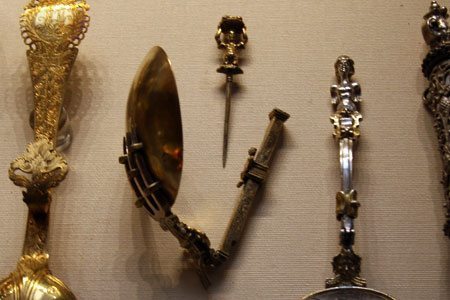 I don’t know what my favorite thing in London is. It think there’s a three-way tie between the insane number of restaurants, the Deptford Leisure Centres, and free admission to public museums. I’ve really been taking advantage of the latter, visiting as many museums as I can, especially the V&A, a museum of decorative arts and design. It is easy to be blown away by the scale and majesty of the “big thing” in the gallery: the new Medieval and Renaissance galleries, the plaster cast of Trajan’s Column, Raphael’s cartoons for the Old School Tapestries, or the Chihuly chandelier. But I am just as floored by the vast silverware displays, which showcase the array of portable eating and drinking utensils from the 16th-19th centuries. Particularly ingenius is the collapsable spoon above. Why don’t they make things like that anymore?