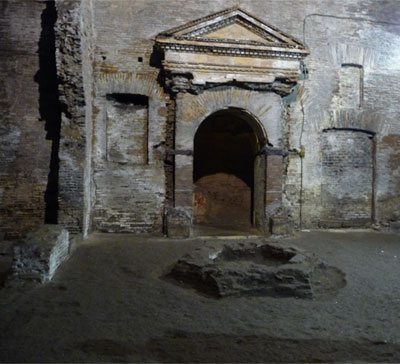 Last week I arranged a special visit to the Excubitorium della VII Coorte dei Vigili for some private clients. This site, ancient barracks for Rome’s fire brigade, is usually closed to the public but I was able to finesse a visit to this off-the-radar underground site. The building itself lays buried 30 feet beneath the Trastevere district. Like so many ancient structures in Rome, it was abandoned in late antiquity and used as a foundation for medieval structures, and because it was buried it was preserved. After a brief pitstop at Biscotteria Innocenti around the corner, we met the custodian who let us down into the site. An ochre façade on Via della Settima Coorte with “EXCUBITORIUM” inscribed above the doorway is all that betrays the entrance to the ancient building. A staircase leads downstairs to what today is a large enclosed room with hexagonal fountain basin in the center and rooms leading off of the main hall. When the barracks were in use, however, this central hall was actually open to the sky, like an atrium in a Roman villa you might find in Pompeii or Ostia Antica.

When the ruins were first uncovered in the late 19th century, archaeologists found graffiti that identified the building but now combination of neglect and humidity have erased any trace of these writings. The site itself isn’t in the greatest shape. Red and white tape closes off a corridor and a skylight above one of the rooms, below which cigarette butts and syringes litter the ground. There has definitely been some deterioration since I last visited in 2006 while filming Cities of the Underworld. It begs the question, what exactly happened with the new administration’s plan to reform Rome’s archaeological patrimony?