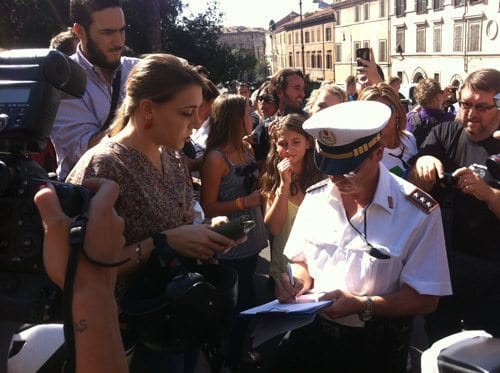 Do no harm. If only that were the driving force behind Roman city policies. During the past decade in Rome, I have watched the city’s monuments decay. Water infiltration, neglect, vandalism, inept management, and vehicle pollution are real problems with tangible impact on Rome’s architectural patrimony. The city fails to protect its architectural treasures; it even permits and licenses massive fume-spewing buses to park among ruins. So pardon me if I find it absurd and unnecessary to ban eating a slice of pizza on Michelangelo’s Cordonata or having a gelato on the benches in front of Palazzo Farnese. These acts in and of themselves do no harm. On the contrary, they support small local businesses which do not provide space for partons to eat take away food.

For this reason, I joined the flash mob at the Campidoglio yesterday (you can see the video here). I came strapped with crochette and suppli’ from Antico Forno Roscioli, one of the supporters of the event. Six of the nearly 300 protesters were fined €50 each for sitting on the steps to eat; the penalties were paid by the crowd. The vigili (Rome’s city police who make better punchlines than law enforcers) were out in numbers enforcing the new ordinance. (I wonder if they ever fine each other for throwing cigarette butts on the ground?)

So what does the law say exactly? The preamble defines the historical center of Rome as a crucial element of cultural patrimony and charges local government with the responsability to protect said area (too bad they fail willfully and miserably for reasons stated above).

It also says that the historical center has a lot of trash and dangerous liquids all over it from people eating and drinking on the streets and that this causes permanent damage (There is trash. No doubt. But it does not damage monuments and it is already illegal to leave it behind. Depriving everyone the use of the city’s public spaces for a basic Roman practice is nonsensical. And in case Alemanno hasn’t noticed, the Colosseum facade is marred by soot and graffiti, not gelato.).

The ordinance states that it is now against the law to sit down and eat or drink anywhere in the historical center. Banning eating and drinking is not the solution. Ticketing people who violate the law by littering and leaving a mess is. That includes the vigili themselves who flick cigarette butts all over their precious patrimony.

The city’s piazzas, steps, and fountains were made to be used by the people. These public spaces were commissioned by Popes, cardinals, nobles families and the like so residents and visitors both could socialize and gather. And, yes, even eat! So I will continue to live this city as I always have (indeed as all Rome dwellers always have). I will eat on its steps and benches and, in accordance with existing laws, I will clean up after myself like a responsable person. In the meantime, the vigili and Alemanno can continue to ignore real issues.