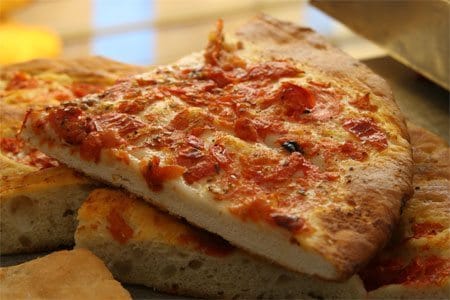 I have already professed my love for focaccia barese in a previous post, but after a recent trip to Puglia, I feel as though I have to revisit this magical olive oil and tomato laden delight. When I thought of focaccia in Bari, I always envisioned an inch-thick doughy bread foundation topped with thinly sliced tomatoes, oregano, and olive oil. Last week I encountered its thinner, crispier incarnation in Monopoli where it is called focazz’. While some of the basic characteristics like the size of the pie and toppings remain the same, focazz’ dough is made with a different type of yeast, creating a more compact and thinner bread. I could go on rambling about the other differences but the best way to understand them is through a taste test of both varieties. Panificio Fortunato on Via Capuccini in Monopoli is a good place to start.