Food & Archeology: Trade, Traffic and Enterprise From Antiquity to Today 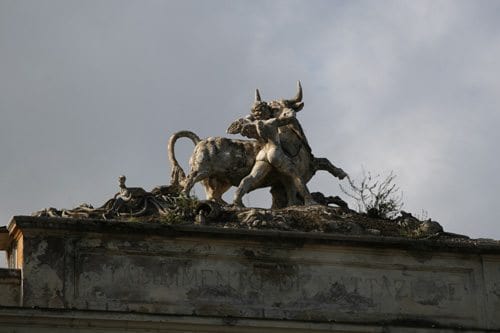 A source of both nutrition and pleasure, food is also a booming commercial enterprise with a long, storied history. As the center of a vast Empire, Rome’s ancient harbors were abuzz with various aspects of the food trade as condiments, raw materials and beverages converged on the banks of the Tiber from distant provinces. Garden estates abutted the ancient city walls and goats, cattle and sheep grazed through suburban pastures.

The dawning of the Middle Ages saw a return to urban agriculture and as the population dwindled, ruins were consumed by nature and shepherds set up shop in the Forum and Circus Maximus, among other ancient sites. Until well into the 20th century, Rome’s cuisine was informed by its proximity to pastures and fields and even today, flocks of sheep can be found grazing within city limits.

I find telling the history of Rome through its food trade and agriculture fascinating and it’s a story I have enjoyed sharing with university students during site visits to the city’s ancient and modern ruins. A trip to Rome allows visitors to mix archeology discovery and culinary history and since I enjoy blending both subjects, I recently launched a new tour entitled “Food & Archeology: Trade, Traffic and Enterprise From Antiquity to Today”.

The tour begins in the ancient produce and cattle markets near the Tiber River, then hikes up the Capitoline Hill, a place of pagan animal sacrifice. From there, it heads downhill to the Circus Maximus for a discussion of how cuisine was used as a means to satisfy and manipulate the ancient Roman population. The tour ends in Testaccio, an area where both ancient and modern archeological ruins testify to the diets and tastes of Romans from antiquity to present day. Issues of hygiene, regulation, importation, and economics are all ripe for discussion as we discover the evolution of food commerce in Rome over the course of more than 2,000 years. The visit concludes with a stroll through Testaccio’s former slaughterhouses and a visit to the Città dell’Altra Economia, a space dedicated to organic food and wine, bringing our lesson full circle from antiquity to modern day.