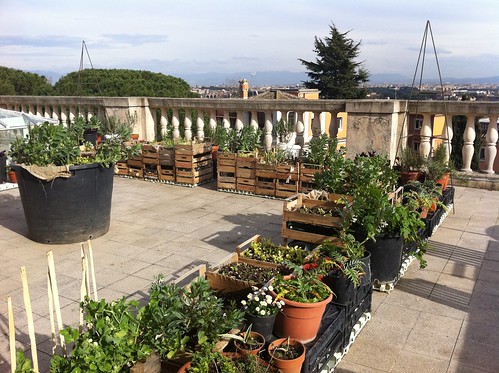 Not many people in Rome have a vegetable garden. Even fewer have one with a view of the Basilica Nova, the Castelli Romani, and the southeastern swath of the city. Perched atop one of Rome’s highest points, the America Academy in Rome is home to one such garden. It is the work of Fritz Haeg, Garden Club of America Rome Prize winner, artist, designer, gardener, and, most recently, worm composter. 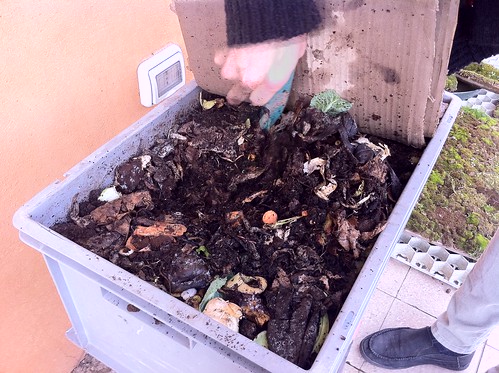 Fritz began his fellowship at the Academy in the fall and has been maintaining a 55 x 60 garden on its roof. The garden, called the Roman Rooftop Homestead, has been fashioned out of discarded plastic bottles, paper cartons, fruit crates, burlap sacks, cardboard boxes, and other discarded containers from the AAR residents. There is also a compost bin which utilizes kitchen scraps. There, Fritz is experimenting with his first worm composting. When I visited him on the rood today, he turned the compost’s upper layer of garlic heads, onion skins, and artichoke leaves to uncover writhing worm babies. 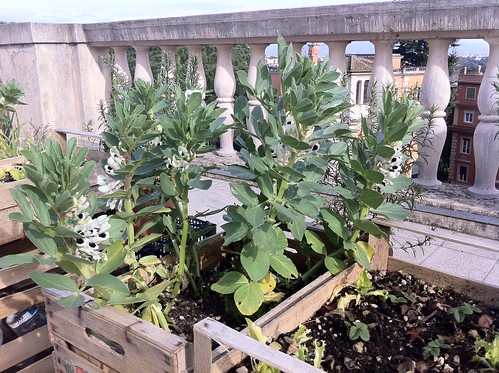 The potted plants on the rooftop include soon-to-be artichokes, flowering fava stalks, several types of lettuce, rosemary, and peas. Fritz will continue to maintain the garden throughout the spring, then turn the plants over to a local school. You can follow Fritz’s Roman Rooftop Homestead (and other adventures) on his Wikidiary. There are more photos of the homestead here.