How to Approach Tipping in Rome, Revised 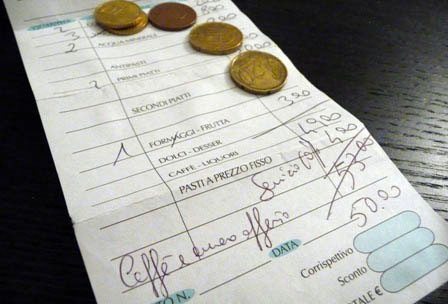 It’s about that time. It’s been nearly a year since my last guide to tipping was published and what with the media frenzy surrounding the Zuckerbergs not tipping at Roman restaurants, now seemed like a good time to breach the subject again.

There are several schools of thought regarding tipping in Rome, but only one of these reflects the local culture. The truth is, you do not have to tip in Rome (or Italy for that matter). Don’t believe me? Let’s have my illustrious colleague Sara Rosso weigh in on this. In her post 10 Tourist Mistakes when Visiting Italy, she writes, “…you don’t need to tip in Italy. Really. Let me repeat that: you don’t need to tip in Italy.”

Still not convinced? Well, that is probably because not tipping feels wrong (that is, if you are American). I would venture to say that virtually every American reading this post has depended on 15-20% tips at some point in their lives to cover car payments, rent, personal expenses, and medical bills. Living off gratuity is a fact of life in the US. In Italy, it is not. Now to be fair, servers aren’t rolling in dough. They are paid relatively low wages (like many workers in Italy). The odds are, they don’t even get to keep most of the tips that are left for them.

But that doesn’t mean you should overcompensate by leaving tips as you would in the US. In fact, leaving a percentage tip, even as “little” as 10% sends a very bad message and perpetuates the idea that Americans are wasteful spenders who flash their money to show status. There is a reason the phrase “fare l’americano” (being an American wannabe) means, among other things, wasting money and hemorrhaging euros like drunken sailor.

So when you are in Rome, or Italy in general, here are some tips on how to approach tipping:

-You never have to tip. Trust me. Just observe the locals. Some tip and some do not.
-If the word “servizio” appears on your bill, you don’t need to leave anything else. You are already being charged extra for service.
-Leaving a euro or two per person is customary amongst local tippers. This is appropriate in most situations. If you go to a super nice place like Glass or La Pergola, feel free to leave a little bit more, but don’t go overboard. €20 on a €500 check at La Pergola is considered generous.
-Forget about percentages.

So the media needs to cut the Zuckerburgs some slack on the tipping front. They did their homework and followed the local customs. They should be severely punished, however, for eating at McDonalds. That’s something to get worked up about.