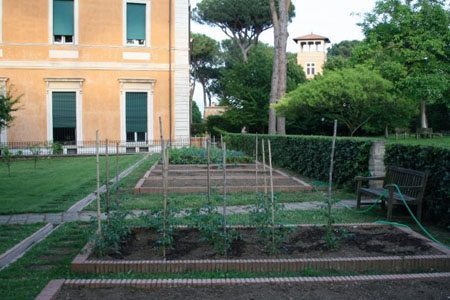 The garden at the American Academy in Rome.

Yesterday I got an email from landscape architect Alexa Helsell inquiring about Rome’s urban farming movement, which got me thinking. For a city that is so blessed with fertile soil, so rife with green spaces, and so proud of its local produce, there are relatively few plots of land dedicated to plant cultivation in town. And, while there are a handful of produce gardens in the city, there isn’t a strong, consolidated movement towards establishing urban gardens for public use. Instead, there are several organizations that have been successful in launching small-scale projects, most of which are aimed at youth education.

Slow Food Roma established a sort of Edible Schoolyard (called Orto in Condotta in Italian) at two kindergartens, I Monelli and Torre di Babele, both near the Fiera di Roma. Rome’s mayor, no stranger to urban farming, recently pledged his support to expand the program, which counts chefs Heinz Beck and Angelo Troiani as major propopnents. The objective is to expand to other schools in the near future. For more information on Orto in Condotta, visit the website.

The Caffarella Park, part of the larger Appia Antica Park, is sandwiched between the residential Tuscolana neighborhood and rolling hills where sheep graze and farmers make ricotta. Part of the park is devoted to didactic farming and the Comitato per il Parco della Caffarella oversees a garden where schools groups and families with young children can come and learn about agriculture.

On October 30, one of Rome’s farmer’s markets, the Mercato di Campagna Amica del Circo Massimo, launched a small urban garden in the market’s courtyard. The endeavor is a collaborative effort between Italia Nostra, Anci, Coldiretti, and Campagna Amica and will host courses on gardening for the market’s visitors and clients, as well as to children from local schools.

The largest government-sponsored urban garden that I know of is the one in Quarto degli Ebrei-Tenuta di Mazzalupetto in northwestern Rome near the G.R.A. (ring road). It consists of 200 plots, 70 meters square each. The project is co-sponsored by several entities, including Legambiente, Regione Lazio, Arsial, Roma Natura and Acqua-Sole-Terra.

The Comune di Roma (Roman city government) inaugurated another city garden, called Il Parco a Orti Urbani (zona Pisana). The 18,000 square meter area is partitioned into 21 plots, measuring 200 square meters each and has a variety of amenities including running water and sheds.

Another graden worth noting, though perhaps not an urban garden in the proper sense of the phrase, is that of the Rome Sustainable Food Project, a joint venture between Alice Waters and the American Academy in Rome. The Academy is located on the Janiculum Hill and has a sprawling backyard where herbs, fruit trees and a vegetable garden provide some produce for the RSFP kitchen.