Istanbul’s Cusine in the 21st Century 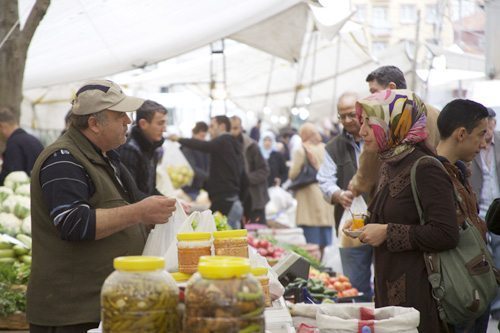 I never used to have a problem with public speaking. I owned the stage back in high school when I was in student council (no, I am not ashamed to admit that I peaked in the 1990s). Then again, I used to practice my speeches. I should start doing that again. I just got home from presenting my app “Katie Parla’s Istanbul” to, among others, Turkey’s Ambassador to Italy, at the Museo Nazionale dell’Arte Orientale. This was my first big speech in Italian and I kinda bombed. My palms are still sweating.

I had all sorts of interesting things to say but instead I rambled about pickles. I wanted to make an articulate presentation on 21st century cuisine in Istanbul. Here’s what I forgot to mention:

Istanbul is touted as the city that bridges east and west, a cliche that distills a complex food culture into one with just two facets. In fact, the cuisine of Istanbul once integrated influences from all directions: the Balkans, Italy, France, and countless traditions from the east and Middle East. But these days, Anatolian regional cuisines and ingredients have flooded the city as a result of immigration from the Black Sea region, as well as southeastern and eastern Anatolia.

Kebab culture, especially the traditional grilled meat and offal dishes of Adana and Antep have been adopted by Istanbul and grill houses like Adana Ocakbaşı and Kenan Usta are among the best places to eat in town. At Çiya, regional seasonal kebabs are exceedingly satisfying. Fine dining chefs are also getting into the Anatolian love fest. Mikla’s Mehmet Gurs just revamped his menu, departing from his Turkish-Finish origins towards a more eastern-looking “kenNew Anatolian” cuisine.

Foreign influences on Istanbul’s contemporary cuisine are less interesting. Terrible pizza and heinously overcooked pasta are a norm at the trendy Italian joints. And the youth panel of the recent GastroIstanbul conference showed a boring and pointless affinity for French techniques. And let’s not talk about all those stupid foams employed in the demos! I probably would have phrased that last bit differently at the presentation…No, I would have. I am incapable of diplomacy.

Other factors at work include the tension between biodiversity and monoculture, the accessibility of quality meat, the logistical challenges of delivering good food to a massive, largely low-income population and sustainable fishing practices.