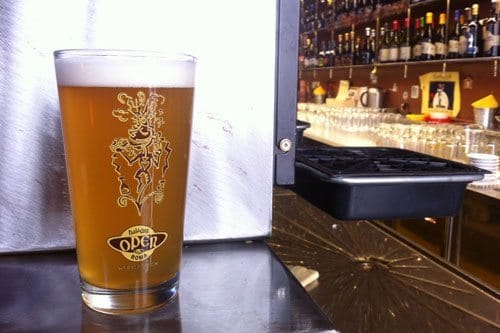 The Lazio beer association launched its own beer, La Zia Ale, during Italian Beer Week in February. The new brew is a collaboration between 8 local brewers (led by Leonardo Di Vincenzo of Birra del Borgo) who employ ingredients cultivated exclusively in the region of Lazio. La Zia Ale (a play on words for the adjective laziale, that is, something from Lazio) isn’t a classic ale, but a gruit ale, which employs herbs and spices instead of hops. It’s an old school approach to beer production and a nod to the thousands of years of history during which beer was brewed with resins, botanical herbs, and seasonal fruits, but no hops.

Well, acutally La Zia Ale has trace amounts of hops, but its primary additives are dandelion greens, bitter almonds, and chicory. I drank this beer at Open Baladin last week and must say it is a nice, fresh, easy drinking beer. It isn’t terribly complex or spectacular in anyway, but is completely down to earth and a fine thirst quencher on a warm May day.