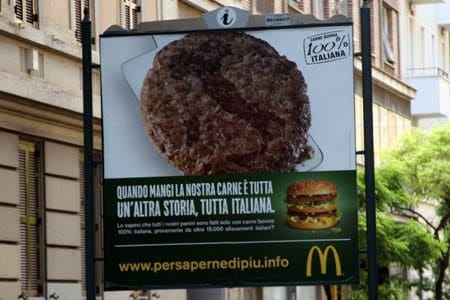 In my humble opinion, there are few things more vile than a McDonalds hamburger, regardless of what ingredients it includes. In January, nearly 400 McDonalds “restaurants” in Italy launched the McItaly menu, which employs the “Made in Italy” branding technique and uses only Italian meat, cheese, bread, spreads and other ingredients.

What is almost certainly more disgusting than a McDonalds burger itself is the fact that this new menu was endorsed by the then Minister of Agriculture (now president of the Veneto) Luca Zaia, a high ranking member of the Lega Nord (more on that later). Here he is during a photo op at the McDonalds at the Spanish Steps in Rome, grinning as he gives a corporate product the Italian government’s seal of approval.

On his website, he equates the McItaly menu, nationalism and quality: “We are in favor of Made in Italy goods for the defense of our identity, and for this very fact we cannot stop at the modes of distribution: we must consider quality. McItaly is this quality, the first completely traceable non-anonymous hamburger through which we can globalize the identity of Italian agriculture.”

Ah, the great national identity argument. Remember when I mentioned Mr. Zaia was a big wig in the Lega Nord, that racist and xenophobic political party that has sadly managed to capture the hearts and minds of many Italians? When a product “Made in Italy” is promoted simply because it is Italian, in spite of it being harmful, full of calories, bad for children, and the offspring of a profit driven corporation, I think the message loses its credibility. Mr. Zaia certainly has.

Journalists and food professionals the world over were quick to criticize the government’s endorsement of McDonald’s McItaly menu. Matthew Fort of the Guardian had this to say. Slow Food founder Carlo Petrini published this in La Repubblica a few days later.

In spite of this initial outrage, McItaly’s menu is still going strong and Rome is absolutely plastered in ads like the one above. Incidentally, whoever dreamed up this enormous patty with the Italian map stamped onto it should be fired. It looks gross. But aesthetic matters aside, the marketing here is quite ingenious. The ad cleverly omits the word McDonalds, employing the trademark golden arches instead. The word “Italian” appears twice, first declaring the beef is 100% Italian, then at the end of this line: “When you eat our meat, it’s another story, completely Italian”. In all, a cheap tug at the nation’s cholesterol coated heart stings.

The ad urges customers to learn more at a website. The site is full of vague assertions about the production and provenance of the ingredients, splashed over a green background. You know, because green means responsible. The most interesting bit, however, is the line on the suppliers (I Nostri Fornitori) page, stating that all producers “contribute directly to the development of the McDonalds paradigm and shares in its success”. I would very much like to see even a single example of McDonalds helping the Italian farmer. The website would be a great place to showcase this, if it were true.

The McItaly menu is intentionally oblivious to its own irony of employing Italian nationalist overtones to sell burgers for an American corporation.
Bringing Italy’s farmers into the destructive fast food fold in the process is shameful and when all is said and done, may be the most vile thing of all.