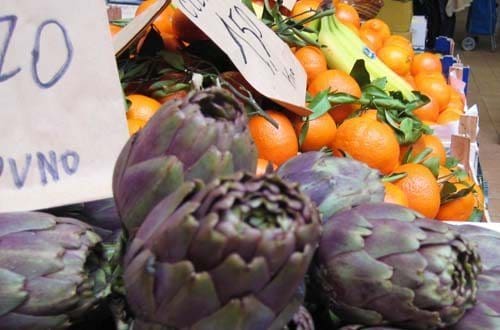 Today’s guest post comes from Jillian Wertheim, a UC Berkeley student currently studying abroad in Rome, a senior staff writer for The Daily Californian, and new Parla Food intern. I thought it would be fun to have a fresh perspective on eating, drinking, and shopping for food in Rome and Jillian will be scouring the city for authentic culinary experiences for the next few months. Her first in a series of guest posts recounts a recent outing to Mercato Trionfale, one of my favorite markets in town:

“Waking up to an empty refrigerator is no way to start the weekend. And so, armed with 20 euro and a canvas bag, I left my Trastevere apartment and strolled upriver for a morning of shopping at the Mercato Trionfale. Blue signs pointed the way — an unexpected surprise, as I’ve grown accustomed to tacking on a solid 15 minutes of “getting lost time” to most of my Roman adventures — and it wasn’t long until I had passed Saint Peter’s and found myself at the market’s entrance.

Mercato Trionfale often goes unmentioned in travel books and tourist manifestos, perhaps because it is so new in publishing terms or because it appeals mainly to locals. This is where the nonnas, families, LUMSA students and other residents of the Prati district pick up their raw materials for the week’s meals.

Formerly an open-air affair taking up the entirety of Via Andrea Doria, Mercato Trionfale has since moved indoors, but has maintained its impressive number of vendors. More than 270 stands line the building that the market now calls home, and the vast array of meats, produce, cheeses, wine, and spices is nothing short of staggering. The divisions of the food pyramid mix and mingle, here — a cluster of macellerie is broken up by a stand selling assorted household goods, from body lotion to juicers, and booths offering fresh pastries punctuate the rows of vendors. 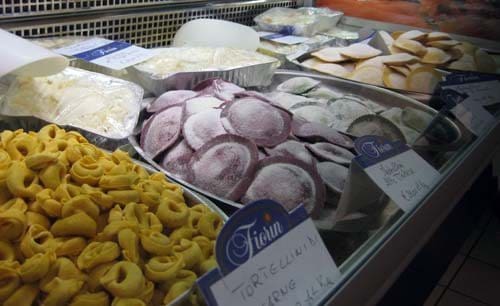 It’s never a good idea to shop for food when you’re hungry, so I bought myself a slice of zucchini pizza, and munched on the salty goodness of toasted vegetables, melted cheese and crust as I meandered into the labyrinth of Trionfale. Heaps of artichokes and Sicilian citrus tempted me at every turn.

I was still reveling in the glory of my newly acquired Sicilian oranges (four for €1.20), when I met Manfredo of Fiorin Pasta. Artisan pastas are a time-honored tradition for Manfredo — his family has been handcrafting and selling their creations for more than 40 years. He recommended medaglioni with a buffalo ricotta and lemon zest filling (his personal favorite) and a traditional spinach-cheese ravioli, both of which sounded too delicious to pass up. I added an etto of each to my bag of treats and decided that any subsequent purchases would bring the weight of my groceries to an uncomfortably heavy level for the walk back home. Just as well, though — it was nearing closing time, anyway, and I’ll have plenty more opportunities to return to Trionfale and leave with more than I can carry.”