Skip to content
Home/Mexican Food in Rome: No, Gracias!
Previous Next

Mexican Food in Rome: No, Gracias! 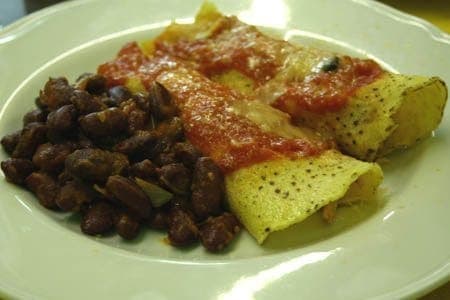 When I think of Mexican food in Rome, one phrase comes to mind: basura caliente — “hot garbage”. One doesn’t have to be bilingual, however, to appreciate how much of Mexico’s culinary greatness is lost in translation at Rome’s Mexican restaurants. Tacos and burritos and barely recognizable, their ingredients ranging from stale and dry to excessive and superfluous. Recently, my Mexican dining experiences reached new lows with two dinners at Griglieria La Vaca in Monti.

For the months before it opened, Griglieria La Vaca’s storefront, embellished with a bowl of vegetables, a handwritten menu, and a sombrero, held great promise. I passed by regularly hoping to see signs of life, some indication that a restaurant serving South American and Mexican dishes a short walk from my house was not a figment of my salsa starved imagination. 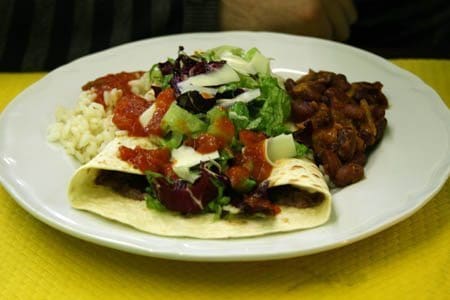 When it finally opened six weeks ago, I stopped by for dinner. The place was empty, though there had been other patrons that evening. I could tell because their dirty glasses and dishes laid abandoned on neighboring tables, where they would remain until after we left. Not a great sign.

We mulled over the menu while waiting for hot Coronas to chill in an ice bucket. In spite of the large slabs of beef tempting us from the nearby fridge, we decided on chicken tacos and a beef burrito. While we waited, we snacked on nachos, guacamole, salsa, and black bean dip from the antipasto buffet. These things were decent enough, but not everything on the table was so appetizing. There was a frighteningly large bowl of mayonaise. Not sour cream. Mayonaise. Another bad sign. 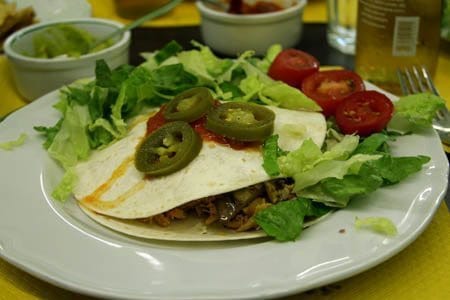 Don’t lose hope, I told myself. The black bean dip was very good, actually–smooth, well seasoned, and richly flavored. After polishing off the snacks, we waited for our mains, still clinging to the hope that decent Mexican food could be had in Monti. With an abrupt PING these dreams were shattered. Through the glass of the open kitchen I saw the burritos being removed from the microwave. They were delivered to the table followed by the chicken tacos 1 minute 20 seconds later.

Aside from the fact microwaving the tacos left the corn tortilla floppy and gummy, the filling was just fine. The shredded chicken had plenty of flavor and spices. The chicken tacos were edible. The beef burrito was covered in so much crap it was hard to eat and the ground beef filling was rather tasteless. 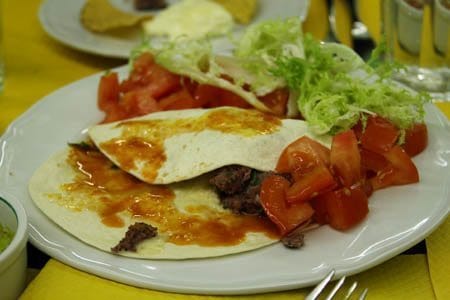 Beef burrito given the Jackson Pollock treatment with salsa at Griglieria La Vaca.

Brimming with disappointment tempered with optimism, I returned to La Vaca a couple of weeks later and had the exact same things: antipasto buffet, chicken tacos, and a beef burrito. I had hoped that the restaurant had worked out some kinks. It hadn’t. In fact, things had deteriorated. The food at the buffet was possibly the same exact food I had encountered on the first trip. Most everything tasted a little off. The beloved black bean spread was dry and chalky. The trough of mayo was still there.

But perhaps the strangest thing was that the chicken tacos and beef burrito looked completely different the second time around. Rather than being rolled up, the fillings laid between two flour tortillas. Bizarre. And this time the chicken was heinously dry and inedible. The beef burrito looked like a mangled quesadilla doused in salsa. Saddened, disillusioned, and confused, I resigned myself to the fact that La Vaca would not become my local Mexican hangout.