Beat the Heat with Gelato in Rome 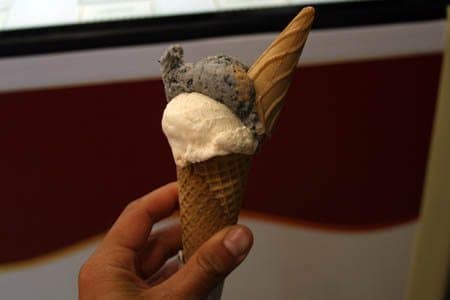 Claudio Torcè’s black sesame and lemon-almond gelato.
Rome is freaking hot right now. In fact, I cannot recall a heatwave this bad since 2003. Then again, I tend to repress temperature-related discomfort, so I may be totally wrong. Anyway, when it’s this hot, one must eat gelato — and lots of it. I’m talking at least two portions a day. Granita is a valid substitute, obviously.

A couple of months back, I wrote this piece for Budget Travel about some of my favorite Roman gelaterie. Word count restrictions and editorial choices meant I couldn’t feature every place I love. Here are some additional suggestions:

Gelateria Corona
Lately, I have been frequenting Gelateria Corona, located in Largo Arenula on the edge of Largo Argentina, on a daily basis. It is run by two exceedingly rude sisters who are as dedicated to making excellent gelato and granita as they are to being miserable–ironically, their father Giancarlo Corona of Gelateria Aracoeli is the nicest man on the planet. I am fully obsessed with Corona’s pistacchio granita, either on its own or mixed with almond. They also have an unusual array of fruit flavors inspired by Latin America.

Il Gelato di Claudio Torcè
Maestro Claudio Torcè has taught his craft to some of the city’s leading artisans including Maria Agnese Spagnuolo of Gelateria Fatamorgana. He makes high quality product in his lab in San Paolo, which supplies his shops on Viale Aventino 59 and Viale dell’Aeronautica 105. His flavors run the gamut from traditional to whimsical. On a recent trip I had black sesame and almond/lemon (pictured above).

Al Settimo Gelo
I have heard claims that Al Settimo Gelo on Via Vodice 21 in Prati is Rome’s best gelateria. I absolutely disagree. Readers know where my allegiances lie. But I will concede that Al Settimo Gelo is very very good. On a recent visit I tried “Iraniano” (ground pistacchios, saffron, and rose water), pistacchio, peanut, and chocolate/hazelnut. They keep their gelato a bit too cold in my opinion and while the quality is high, I still prefer nearby Fatamorgana on Via Bettolo any day of the week.

Greed
Let me preface this one with a disclaimer. I go to Greed for the good ingredients and weird flavors. I don’t always enjoy the outcome. Dario Rossi, Greed’s owner, makes gelato out of absolutely everything, as longs the ingredients are fair trade. Take cacio e pepe (pecorino cheese and black pepper), risotto di porcini (porcini mushrooms with rice), carrot, and celery, for example. If you don’t want to make the trip out to Via Vestricio Spurinna 97 near the Numidio Quadrato stop, you can find his creations at Campagna Amica’s Farmers Markets in and around Rome.