The Great Olive Curing Experiment of 2012 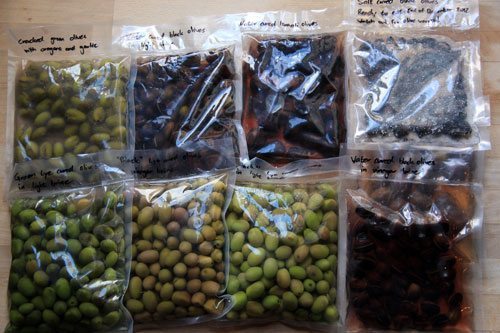 On Saturday November 10, my sleep deprived friend chef John Regefalk and I liberated olives from the trees in front of San Gregorio near the Circus Maximus. In all, we harvested more than 6kg (13 lbs) of olives, to which John added a few hundred additional grams from a 151-year-old tree on Via dei Fori Imperiali. Over the course of the past month, John has diligently nurtured these olives, transforming them from bitter, inedible fruit into delectable, edible snacks. What follows is John’s curing diary, a series of hilarious and occasionally coherent emails about the curing process*:

First results should be tastable when you’re back in town. So many different recipes! But I noticed that the ripe ones are not really used a lot. Many of the recipes use green ones. But from the tree on via dei Fori Imperiali, which was filled with ripe black fruit, I’m definitely making kalamata style brined ones. Seems like ripe olives might get too soft in the lye.

Ok, so I currently have 3kg of each green and black ones in lye. then small batches of cracked green olives, dry salt cured black ones and kalamata-style black ones.

The ones with crack in them will probably be addictive!

Now we will watch a movie and I will probably fall asleep halfway thru. Though the olives wont be done until 2 am so I need to wake up again later.

just tasted the olives. the black ones (once upon a time black) showed a complete lack of bitterness, and they had a hint of butteriness instead. But they actually don’t taste like anything since they are without salt so far. The green ones that spent time in lye, were slightly different, less buttery and unfortunately still contained lye. Which taste like shite, or at least like strong soap. but I guess a couple of more days and they’ll be fine.

I then tried the “kalamata-style” which have only been in cold water. Beeewwwwwuuu…..like straight from the tree. Likewise for the green cracked ones. So far the winner is: LYE!

I have big hopes for the new olives. Tomorrow I’ll bring a small batch to work to LYE them (they need stirring every hour – kind of like having a small baby. I guess.)
They are so mature, soft, fatty, juicy, plump.

Hope to get this friggin’ soap flavor out of the olives before you get home, or do you have any good wine pairing with soap?

I should have managed to Frankenfacture an edible olive around 10 days from now.

So I tried a few of the olives. Then I waited a few hours before I wrote this mail to you. Just to be sure I wasn’t dead. Or something similar.

The cracked green ones in vinegar and spices are good, of course. How could they not be? Salt, vinegar and garlic is a winning combination every time. Both for scaring off vampires and pickling olives.

I tried some of the black ones “nature”, the water cured ones. They have not yet found their way into brine since they have a slight bitterness still remaining, but hey, we can take that right? We have grownups’ palates! Tomorrow I will drown them in brine. I have big hopes for the small black ones. They are firm, oily and have a pleasant olive flavor. The big black ones on the other hand already taste like the Spanish black pitted cocktail olives, which I cannot really feel is a positive thing.

Then we have the really interesting ones! The salt cured black ones. Since they do not pass thru neither lye nor water baths, they retain ALL of their original flavor, including bitterness. Not for kids! But they were actually very good! (This may be due to the high content of small yellow worms that I found dead and shriveled up among their former olive homes).

Furthermore I think something must have gone wrong in the sorting and grading department after picking and prior to pickling since all batches are a mess of different sizes, colors and ripenesses. But hey, if you eat 4-5 olives you’re bound to get a good one! Laziness is human.

So, I come home late a saturday night after work, firmly decided to taste a few of the newly brined black olives.

Entering the kitchen I see a lovely plate of charity leftovers from an Italian turkey thanksgiving dinner, complete with cranberries, stuffing, brussel sprouts and a mind-blowing apple sauce! No need for more details. I didn’t touch the olives.
Hope they’ll make it til tomorrow.

So, I had another taste of the olives! Things are proceeding as planned!! They no longer taste like licking insect repellant off a dirty car tire. They are now edible! Even if maybe not at their prime yet. The water cured ones will be taking home the trophy I think! Just think about what simple water combined with this miracle product called “salt” can do! Salt turns humble fish roe into caviar and bottarga, it turns a fatty, hairy pig’s jowl into guanciale and it turns a fresh head of cabbage into stinky sauerkraut. Don’t we just love it!?

We now proved that it can also change the nature of locally grown and very honestly stolen olives from inedible oleuropein-loaded small packets of bitterness to a palatable, rich and flavorful snack!

Now if I just had someone to do the harvesting for me…someone that’s always out and about, someone that knows just about every olive tree in Rome…maybe a good climber… Any volunteers? 🙂

John dropped these bags off for me to taste last week and I have been sampling and tasting all weekend long. They are all very different, due both to their species and curing methods. I’m still deciding on a favorite! 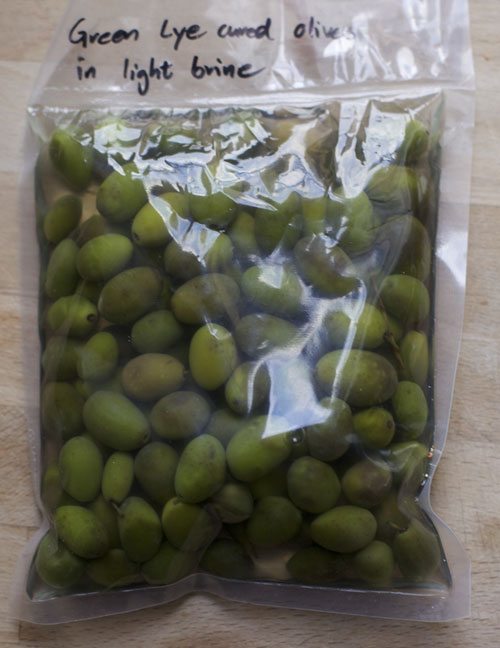 Green lye cured olives from the Celio in a light brine. These were green when we picked them. 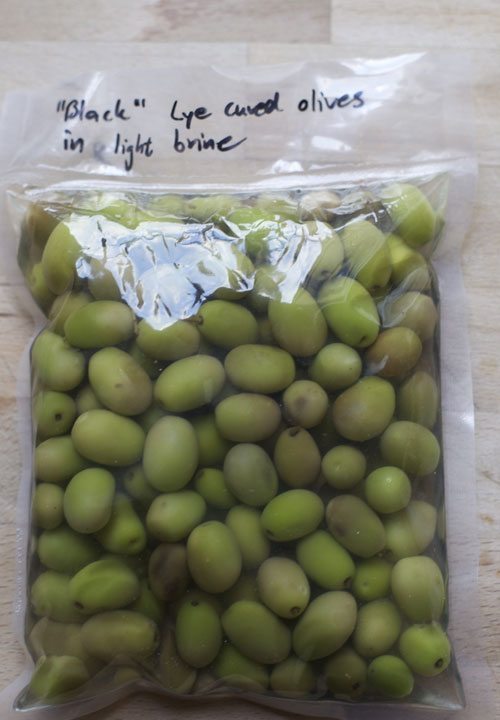 Black lye cured olives from the Celio. These were black when we picked them, but they lost their color during lye curing. They are preserved in a light brine. 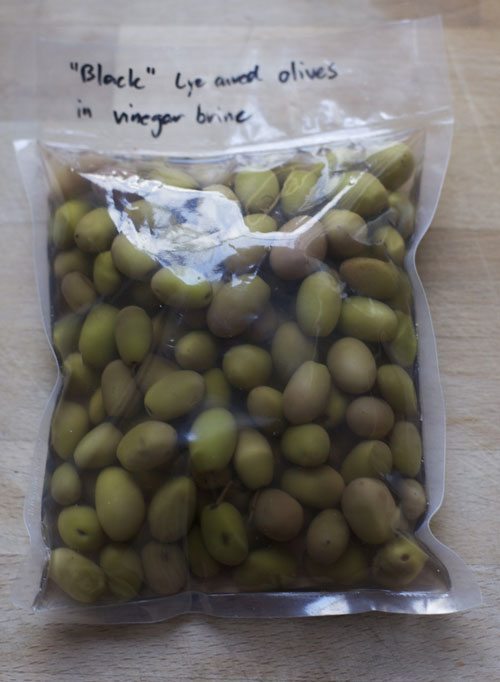 Black lye cured olives from the Celio. These were black when we picked them, but they lost their color during lye curing. They are kept in a vinegar brine. 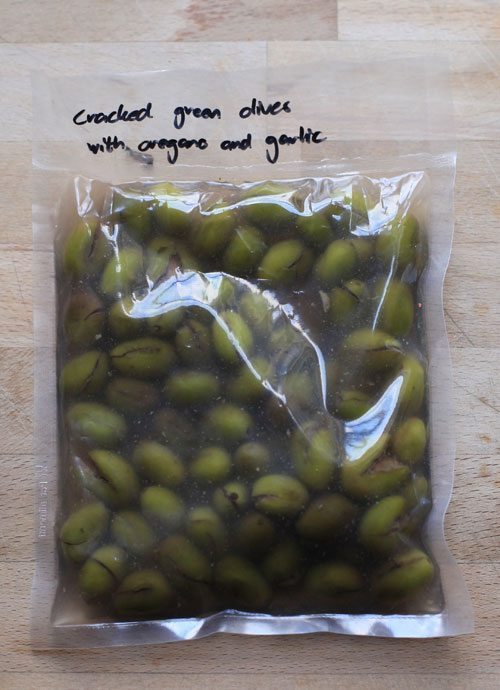 Cracked green olives from the Celio in a vinegar brine with oregano and garlic. 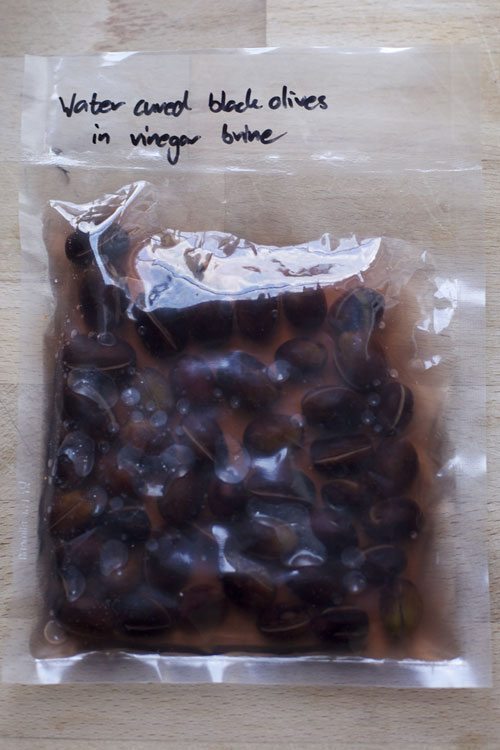 Black water cured olives from the Celio in vinegar brine. 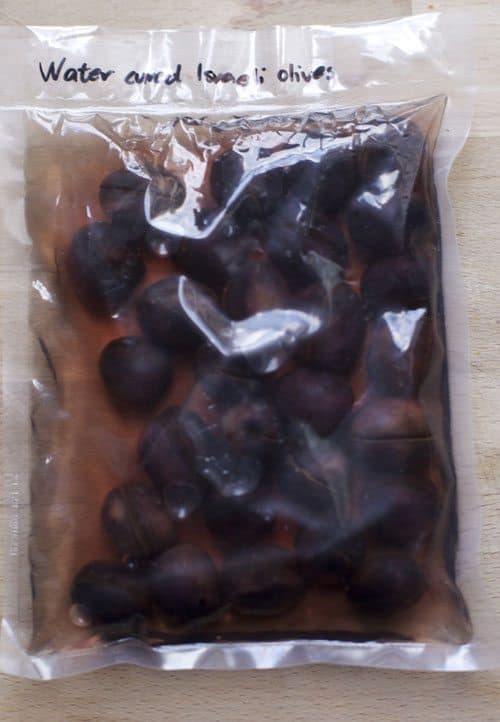 Water cured black olives from a 151 year old tree on Via dei Fori Imperiali. The tree was donated from Israel to the city of Rome to commemorate the 150 year anniversary of Italian Unification, which was celebrated in 2011 (nevermind that the unification process wasn’t actually completed until 1870). 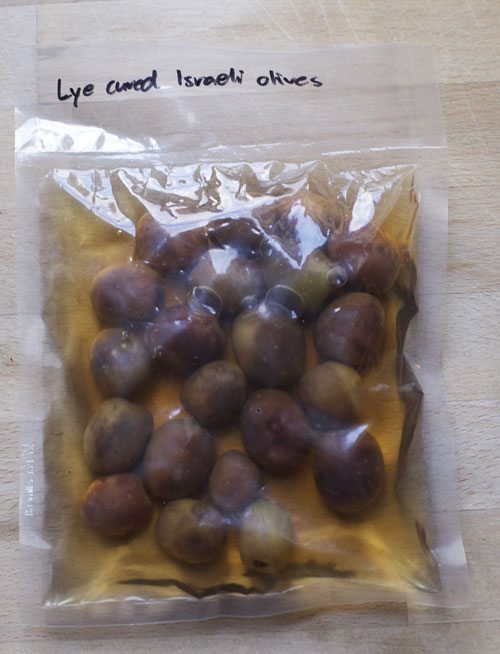 Black lye cured olives from the same 151 year old tree mentioned above. These were jet black when John picked them, but they lost most of their color during lye curing. They are kept in a light brine. 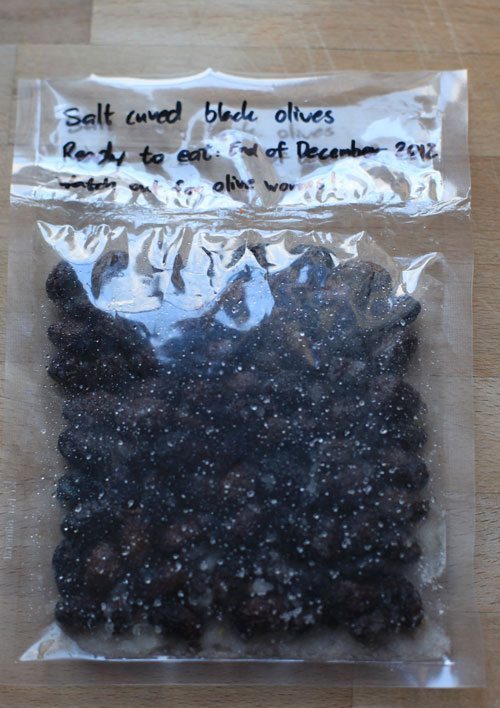 Salt cured black olives from the Celio. These are not yet ready to eat and bear the warning: watch out for worms. Their yellow shriveled corpses are visible amongst the salt grains.