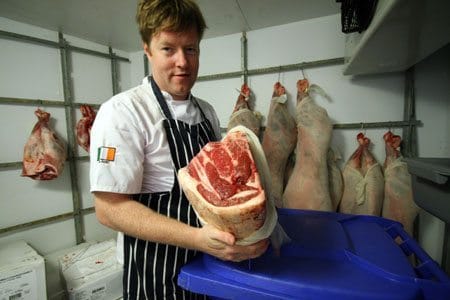 Last week I had the great fortune of meeting fellow foodie and kindred spirit Dino J (that’s @Gastro1 for those of you on Twitter). The venue was O’Shea’s of Knightsbridge, London’s premier butcher shop and family venture just a short stroll from Harrod’s.

I arrived a bit early for our appointment and introduced myself to Darragh O’Shea, proprietor and eighth generation butcher (follow him on Twitter here). He informed me Dino was expected momentarily and offered to show me around. We headed downstairs to the drying rooms where gorgeous marbled Black Angus sourced from Scotland and Ireland was resting in various stages of maturation.

Back upstairs, we visited the walk-in where a dozen or so lamb carcasses hung along the wall. A few boxes were stacked up on the floor and Darragh ripped open one of them to show off some beautifully marbeled Black Angus. The meat had been recently delivered and was destined for the basement aging rooms where it would dry aged for anywhere between 28 and 65 days. 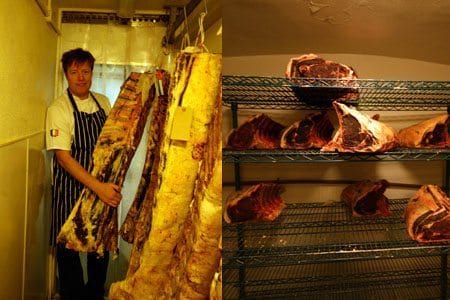 Then Dino arrived and we chatted for a good hour in front of O’Shea’s counter where the meat and poultry is displayed in a long glass case. He described the contents, identifying each of them with their respective place of origin: Rosé Veal from the South East of Ireland; organic, free range pork is from Dorset; lamb from Yorkshire, Shetland, the West Country and Wales; poultry from France and the UK.

Our discussion of meat turned to restaurants, chefs, scholars, mutual friends, and, ultimately, Italy. I could have spent the whole day chatting with Dino, ideally over a hunk or two of O’Shea’s glorious meat. But, sadly, other lunch plans dragged me away, but I know we will meet again soon. I’ll bring the Lipitor.

If you’d like to try O’Shea’s meat but are just visiting London and have no means to cook, you can swing by for some window shopping and a pork belly sandwich. Or even better, head to one of the restaurants they source: Goodman, The Royal Oak, Racine, and Byron (their limited edition 8 oz Irish beef “Big D” burger).