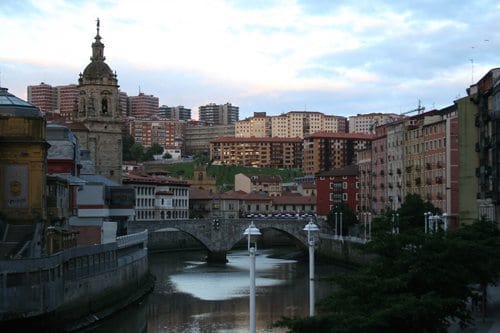 After several days and several meals in Bilbao, I have become infatuated with the city’s pintxos. Mamma Parla and I had a few restaurant meals (2 out of 3 were painfully disappointing) which drove us to drown our sorrows in txacoli, the local wine, and artfully prepared finger foods.

The pintxos we enjoyed were recommended by several readers who gave suggestions via Twitter and Facebook. A very special thanks goes out to Marcy Benson (@prosecoprincess on Twitter), Sara Nieto (@sara_nieto on Twitter), and Ibone Bengoetxea, and Marta Yrizar whose advice led us to bite after bite of deliciousness.

One of our favorite spots was Bar Gatz on Calle Santa Maria in the Casco Viejo (old town). We really did a number there. We started with roasted red peppers filled with tuna salad and belted with an anchovy: sweet, tangy, fishy, perfect.

Next up was the ubiquitous Basque specialty, bacalao al pil-pil, cod with a sort of olive oil fish fat glaze.

The ham with whole wheat bread and a sliver of tomato was simple and delectable.

But the highlight was pureed roasted eggplant with goat cheese. Smokiness and tanginess are a beautiful couple.

We were just about to leave when a plate of fried anchovy pintxos came out. So of course we stayed for one more bite. And another txacoli.

Our next stop was Xukela on Calle Perro, just around the corner. This place was buzzing, but we squirmed our way to the bar and picked out a handful of pintxos, which we downed with yet more txakoli. I am fairly certain this local white wine has a very local alcohol content because at this point I am still lucid.

The headcheese with pickles was phenomenal and the bizarre looking mushrooms with a vinegar reduction was outrageously good. The salmon was nice, but the ham sandwich didn’t quite rival the previous evening’s version at La Viña del Ensanche. 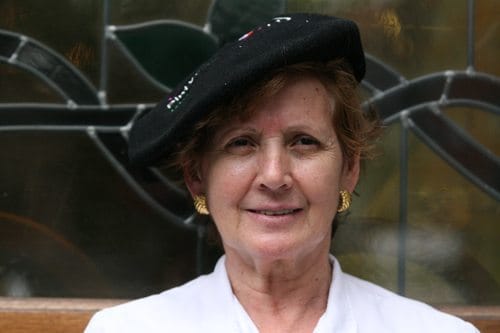 The third stop on the afternoon’s pintxos crawl was Kepa Landa on the other side of the river on Calle Henao 12. Its creator Begoña Pérez Azcona had just won the coveted black beret for best tortilla in the region the second year in a row.

Her simple potato tortilla (omelette) was perfectly prepared with skill and attention. She also makes an incredible torrija (aka tostada de pan, thick slices of bread soaked in milk and cinnamon).

El Globo, a Bilbao institution was another fun spot. Mamma Parla even stepped out of her comfort zone and ate anchovies!

And last but not least, we visited Txiriboga in the Casco Vecchio with Marta who introduced us to their wonderful croquetas (fried besciamel!!!)