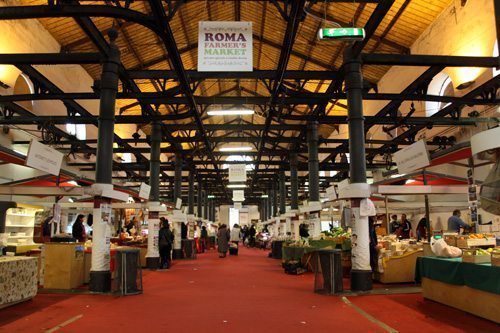 Polemiche: pl, noun. Definition: Controversy brought on by differing opinions. It wouldn’t be Roman news without a whole lot of polemiche. The subject of this post is the debate over how, where and how much food commerce can be conducted in and around Testaccio.

When the Testaccio Market moved to its new location last July, petitions had already been filed by its vendors seeking to shut down the nearby Roma Farmers’ Market. Some facts: the Testaccio Market, which stands beside the ex-mattatoio (old slaughterhouse) is open Monday to Saturday from 8:00-14:00 (until 19:30 on Fridays). The Roma Farmers’ Market was in the southwestern part of the former slaughterhouse and conducted business Saturdays from 9:00-16:00 and Sundays from 9:00-14:00. Are 6 hours of competition enough to shut down a farmers’ market? In Rome, it seems that might well be the case (though the Testaccio Market vendors have bigger fish to fry). Today the Roma Farmers’ Market conducted its final day of business in the ex-mattatoio.

But there may be a silver lining to all this drama. The Roma Farmers’ Market will relocate to the newly renovated mercato rionale space on Via Passino in Garbatella. The space will be bigger and more adapted to food commerce and will welcome more vendors than the Testaccio location. But before the celebrations commence, the presence of a privately run market in a publicly financed space may bring its own share of polemiche, particularly in Garbatella, a neighborhood with a political and social conscious that (rightfully so!) does not take kindly to intrusion by private entities.

Another benefit of the Roma Farmers’ Market moving is that the Sunday Biomercato at the Citta dell’Altra Economia–also in the ex-mattatoio!–will likely garner even more and well deserved attention for its local and organic food sold by small producers and farmers (the vast majority of which was superior to what the neighboring Farmers’ Market offered anyway!). Stay tuned for results and, undoubtedly, more polemiche.