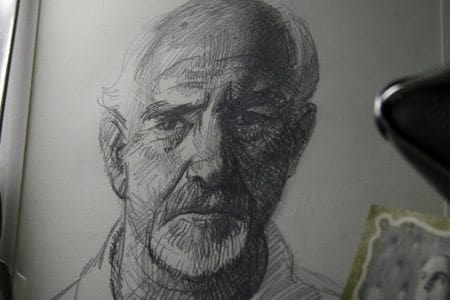 Yesterday was a good day. I had lunch at the American Academy in Rome with my friend Annie and the founders of Design Observer. It was the first day that lunch was served in the courtyard, as rain and unseasonably cold weather had kept the spring meals inside until now. As I queued up for the buffet meal–lunch at the AAR is buffet style–I spied my old friends the Harts and Adele Chatfield-Taylor. It was quite a reunion and good company always makes the food taste better.

Not that the food needs any help! Since February 2007, the American Academy in Rome’s kitchen has been run by Alice Water’s Rome Sustainable Food Project. Head chef Mona Talbott, Sous Chef Chris Boswell, and a team of cooks, including interns from all over the world, have been providing lunch (Mon-Sat) and dinner (Mon-Fri) to the Academy’s fellows. Seasonal food is sourced from quality producers like farmer Giovanni Bernabei, and Roscioli. The RSFP also tends a garden on the Academy grounds where produce and herbs are grown for the kitchen.

After a lovely lunch of spaghetti all’arrabiata, potato salad, and fava bean puree with chicory, I headed to the Auditorium for another RSFP event, a round table discussion about the Academy’s sustainability at the Settimana della Biodiversita’. Participating in the panel were Ms. Waters, Mona Talbott, Elizabeth Minchilli (journalist and head of the Friends of the American Academy in Italy), and Beth Pfannl (Director of the American Overseas School in Rome). The discussion focused on the success the RSFP has had in radically revamping the way the AAR’s fellows interact around the table (before Waters’ kitchen took over the food was beyond vile and meals were a chore not a pleasure) and how an American kitchen approaches Rome’s seasonal, traditional cuisine.

At the end of the talk, an audience member asked Ms. Waters what her next step would be after the success of Chez Panisse, The Edible Schoolyard, and the Rome Sustainable School Project. Her response was hopeful. She described a discussion she had had with Rome’s Mayor Gianni Alemanno at dinner the previous evening. She had pressed him on topics like composting and school curricula, both of which he dodged. He was responsive, however, to her proposal of having a public garden installed in an important civic place in Rome, as Slow Food had done at City Hall in San Francisco. Her proposed location: Piazza del Campidoglio beneath the statue of Marcus Aurelius, located in front of the Alemanno’s office. What an appropriate place to plant seeds of change.