Sfinge and the Feast of San Giuseppe, Palermo 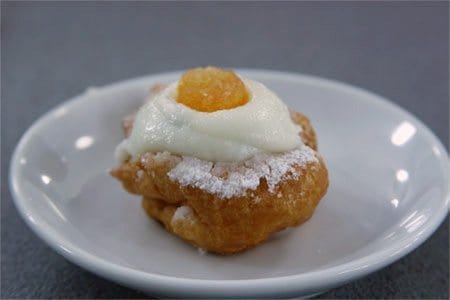 Today’s festive and timely guest post comes from Dr. Paula Salvio of the University of New Hampshire Sustainability Institute. She shares old and new memories of a special deep fried Sicilian treat that is traditionally made on March 19 for the Feast of San Giuseppe.

“On an afternoon walk in Palermo last March, I strolled past the Norman Palace and just beyond the city walls to Pasticceria Cappello, a historic pastry shop owned by Salvatore Cappello, one of Sicily’s pastry-making legends. There, I found a treat similar to my grandmother’s rum-soaked Neopolitan zeppola. Locally, this deep fried pastry is referred to as sfincia or sfinge. The version I remember from my youth was sometimes soaked in liquor, sometimes not, but always filled with tiny Nestle chocolate chips and sugar folded into Polly-O ricotta.

The signature taste of Cappello’s traditional sfincia is altogether different. At Pasticceria Cappello, they are made with Sicilian sheep’s milk ricotta, which brings with it a subtle tang. Between the undulating layers of sweetened filling, I found chunks of dark chocolate that Salvatore sources on regular trips to Central America and Madagascar.

The traditional ingredients for sfincia are at their peak of perfection in Italy’s most glorious south, where citrus and ricotta reach their full expression. While customs have changed and sfinge are now made in Palermo year-round, they are traditionally consumed today, March 19, the Feast of San Giuseppe (St. Joseph). 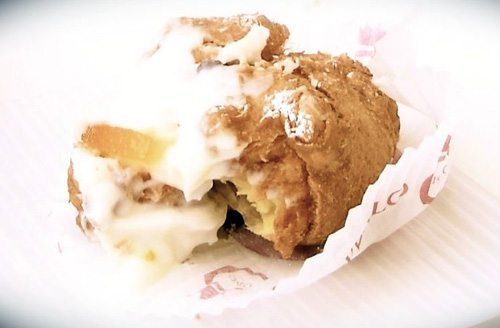 The feast, which honors the patron saint of fathers, immigrants, workers, unborn children and a happy death, bumps up against the end of Lent and the spring solstice. On the evening preceding the feast, the Ballarò neighborhood where I stayed was lit up with bonfires. Old furniture and junk were set aflame to honor St. Joseph and to symbolically burn away the misery of the past year in the name of a new season. On the morning of the 19th, neighbors build large alters and tables outside the city’s churches and heap them with fried artichokes and zucchini, chicken cutlets, bread and pastries. The sfincia, capped with candied citrus, crushed pistachios and filled rich ricotta cream, adorn the banquet tables like Byzantine jewels.

So central are these sfinge to Palermo’s culture that they have even give rise to a local expression, “moddu comu na’ sfingia” (soft like a sfincia), meaning gentle and compassionate but with an absence of strength or determination, referencing the softness of this delicate pastry. It is not surprising, then, that these seasonal pastries compel even the most hard-hearted to turn ‘soft’ – “moddu comu na’ sfingia” – in their presence.

You can find an abundance of sfinge at Pasticceria Cappello and variations on this traditional food all over Italy.”