Some Myths About Rome That Need To Die 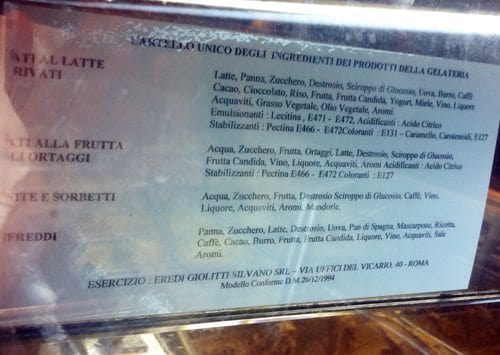 Giolitti is terrible and this ingredients list is proof.

It’s 2013. Sometimes I have to remind myself. This is due partly to my awkward relationship with calendars, but I mainly attribute it to the continued proliferation of falsehoods about Rome that were true a decade or more ago (or never!), but long ago ceased to be universally accepted truths. Too often, I read outrageous claims about Roman food culture; these are in desperate need of an update. It is time for the information out there to conform to this century. Wake up and let’s face the city’s gastronomic realities head-on. Here are some myths about Rome that need to be put out of their misery:

Caffe’ Sant’Eustacchio serves the best coffee in town. This could not be further from the truth. The coffe is sometimes good, occasionally great, but mostly just passable. Also its surfaces are perpetually sticky. Ditto for Tazza d’Oro. Check out Sciascia in Prati for the real deal.

You can’t find a bad meal in Rome. It’s true that everything tastes better on vacation. But if you compare the ingredients and dishes found on Roman restuarant tables today to what typified the city 2 decades ago, you’ll be surprised by the tangible decline. The center of Rome is particularly plagued by very mediocre restaruants. Luckily, there are still a handful that keep it real, though bear in mind that even the great places excel at some dishes and not at all of them. For a round-up of where to eat well in Rome, check out my app. And for more on how to order the “right thing” in Roman restaurants, visit this post.

Romans eat tiny portions and order every course. This was perhaps the case in pre-euro Rome when people went out to eat regularly and could afford four-course meals. Now budget-oriented customers order fewer dishes and are attracted by portions of ever-growing dimensions, especially pasta.

Testaccio is undiscovered. Just because the free tourist maps slices Testaccio off the bottom of the page, doesn’t mean this neighborhood is outside the center. On the contrary, it is very much central and very much on the beaten track. I love Testaccio on Sundays when the Città dell’Altra Economia Biomercato is going on, but during the week, get there early or prepare yourself to be trampled by huge tour groups that pack out the market and that overrated store owned by two greedy brothers.

Giolitti serves amazing gelato. Nostalgia is a powerful force and, though I wouldn’t touch Giolitti’s gelato with a ten foot pole now (call me picky, but I prefer to consume ice cream that doesn’t contain vegetable oil and artificial colors!), I get that visitors and locals alike have fond memories of the place. It was a regular stop for me in the early to mid-aughts. But then the (albiet small) natural gelato movement took off. This is where to get amazing gelato these days:

Campo de’ Fiori is an authentic market. Spend 10 minutes standing next to Giordano Bruno and analyze the tourist to local shopper ratio. No Rome resident has ever purchased limoncello that comes in a boot-shaped bottle, nor has a local ever purchased phallic pasta. Though a handful of stalls sell (overpriced) produce, the only reason to go Campo these days is to have a good cry.

House wine is delicious. Unless you are referring to that of a fine dining establishment, the odds are the vino della casa is industrial swill. Spend a few euros more and get the good stuff.

Trastevere is some sort of food paradise. This statement was teetering on the edge of falsehood when I moved to Rome over a decade ago. Perhaps the neighborhood had some good, rustic places to eat back in the 20th century. But those days are long gone. Now Biscottificio Innocenti, Fior di Luna and a handful of other places are satisfying, but the neighborhood as a whole disappoints.

There is no good ethnic cuisine in Rome. This one drives me nuts. One of the best restaurants in the world is Mesob, a spectacular Ethiopian restaurant on Via Prenestina. Rome is not and will never be London or even Paris, but you can find some stellar non-Italian options in town. Check out The Rome Digest international dining category here.

Sora Margherita is delicious. I had a good laugh when I saw T+L shout this place out in their recent Food Issue. Then I immediately felt nauseous, perhaps a residual effect from having eaten at this terrible place. The food is overpriced and of poor quality and they have hygiene issues. Lawsuits have been waged and won for less inflammatory statements, but I’m sticking to my story.

Romans are devoted to local produce. Not really. In general, consumers in Rome are driven by value–or the perception of value. Just visit any supermarket (where most people shop) and check the quality and provenance of the stock.

I could go on, but I’ll leave the ball in your court for now. What myths would you like to see put to rest?