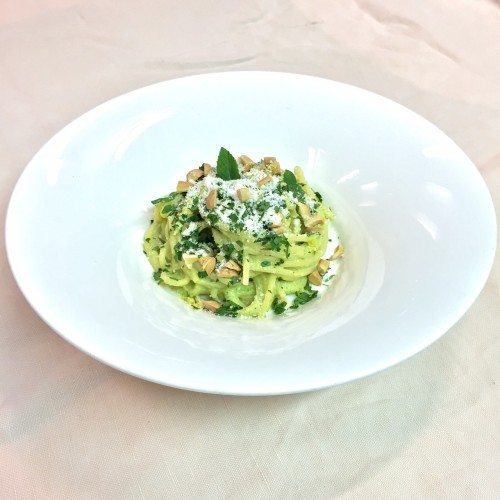 It’s been a loooong summer, folks, and thanks to a string of unrelenting heat waves, Rome still has massive amounts of summer produce at its market stalls. But if crisp mornings are anything to go by, autumn will be here soon enough, which means its time to OD on the last of the summer harvest before it disappears. I’ll be eating zucchine romanesche in a dozen ways before it vanishes, including as the protagonist of this Spaghetti con crema di zucchine, mandorle, e pecorino, which appears in this month’s Food & Wine. Grab the issue on newsstands now for more end-of-summer recipes, including Straccetti con rucola e pomodoro (sirloin strips with arugula and tomato) and Insalata di Riso (Arborio rice salad). Here’s my recipe for spaghetti with zucchini, almonds, and pecorino. I use some raw zucchini matchsticks with the chunky zucchini sauce to add a bit of texture.

Preheat the oven to 375°. Spread the almonds on a baking sheet and toast for about 8 minutes, until golden. Let cool, then coarsely chop. Reserve 1/4 cup for garnish.

Heat 2 tablespoons of oil in a large skillet over medium-low heat. Add the garlic and chili flakes and cook until very fragrant, about a minute. Add the chopped zucchini to the skillet and season with salt and pepper to taste. Cook, stirring occasionally, until the zucchini is soft and lightly golden, about 10 minutes.

Place the cooked zucchini into a food processor and blend with remaining chopped almonds. Slowly add the remaining olive oil until the mixture is nearly but not quite smooth. Adjust seasoning.

Cook the spaghetti in a large pot of salted water until al dente. Drain, reserving 1 cup of the pasta cooking water. Return the pasta immediately to the pot off the heat and add the zucchini matchsticks, zucchini pesto, half of the cooking liquid, the mint, lemon zest and 1 cup of Pecorino Romano. Stir until ingredients are incorporated, adding additional cooking water if necessary to create a creamy sauce. Serve garnished with the reserved almonds and remaining Pecorino Romano cheese.