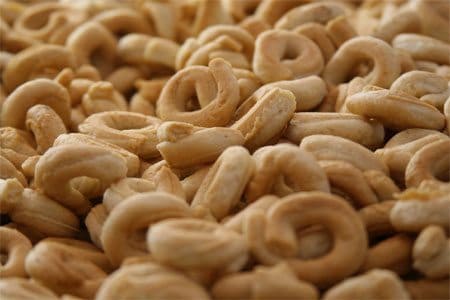 After a long day of touring, there is nothing I like better than a cold beer and snacks. My pairing of choice is a Menebrea and taralli, light, crunchy bread rings from Puglia that are first boiled then baked. When I first moved to Italy, I had no concept of regional differences in cuisine. I thought you could find polenta in Sicily and cannoli in the Veneto. What did I know? Only after some time did I realize that there are certain specialties that are so characteristic of a region that they become somehow synonymous: mozzarella di bufala and Campania, olive ascolane and Le Marche, and taralli and Puglia. Over the past decade, a renewed interest in food among many Italians and a curiosity for regional specialties means that many regional products are now sold nationwide. So even though I am far away from my favorite Italian region, I can still unwind with its signature snack.