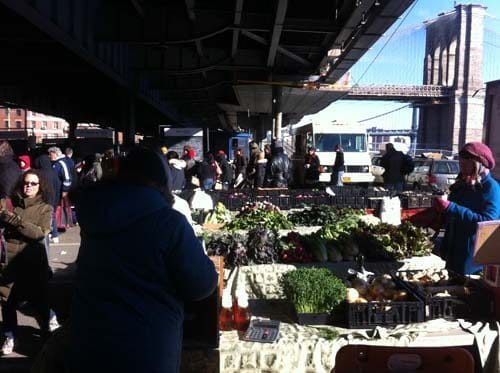 On Sunday Mamma Parla and I made our first visit to the New Amsterdam Market in Lower Manhattan, which happened to be the market’s fiftieth engagement. It was also the market’s final meeting of 2011 and, in spite of the frigid temperatures, which were only intensified by the proximity to the East River’s icy waters, dozens of affable vendors gathered beside the Fulton Fish Market to sell their wares. 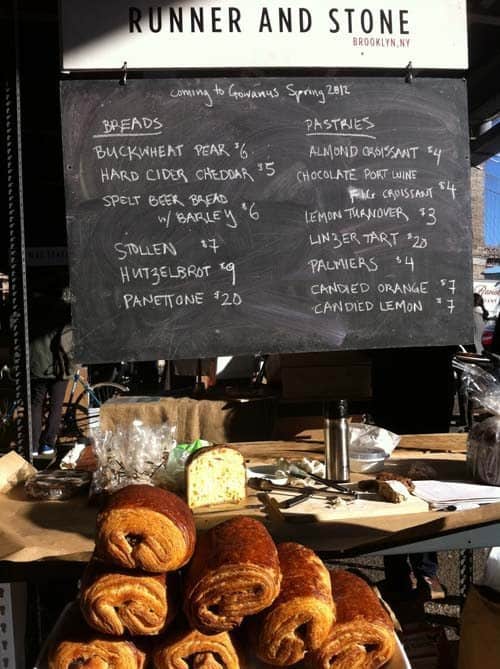 In the past years, I have been proud to watch local markets gain momentum and improve the quality of food offerings in the Tri-State Area and the New Amsterdam Market is certainly the fullest expression of this change. Some of the leading small producers in the North East were present, as well as 12 sustainable fisheries. There were some familiar, established names in the crowd–our neighbors The Bent Spoon were there scooping gelato and Blue Bottle Coffee were there brewing. But there were also a lot of businesses we didn’t know, like Runner and Stone, a bakery that rents space in a commercial kitchen but aspires to open a proper shop in Gowanus in the spring. 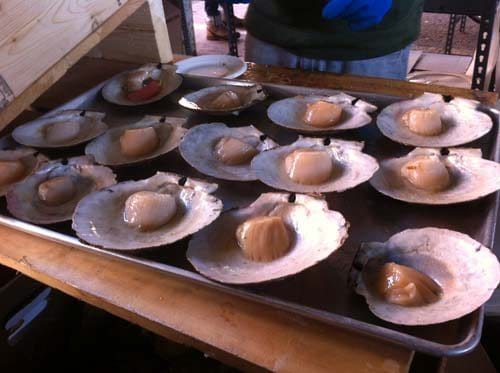 The market’s theme on Sunday was sustainable fishing and there, too, were some familiar names like David Pasternack of Esca. But we met many others who served exquisitely fresh seafood with a smile, wet gloves saturated with water and ice in below-freezing weather. We got a gorgeous piece of cod for dinner and snacked on raw oyster, clams, and scallops. We saved the fish for last, though, spending the first couple of hours at the market grazing from stand to stand, occasionally retreating to the car to warm up (I still insist on underdressing everywhere I go and my shoe of choice is Converse, which only amplifies my non-existent extremity circulation in wintery temps). 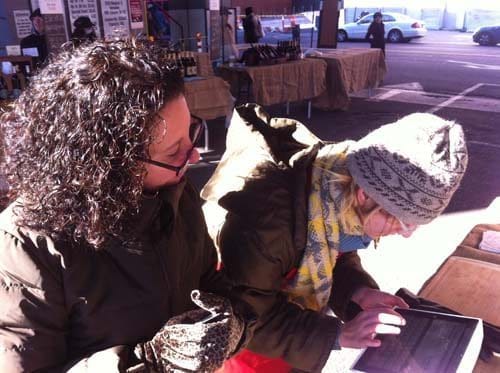 We started at Craft Coffee where Mamma Parla bought some Christmas gifts. The company is a web-based business and, although they have a stand, all purchases must be done online. They have an iPad set up at their stall for purchases. After 9 years in Rome, this contemporary commerce seemed like the year 3,000. 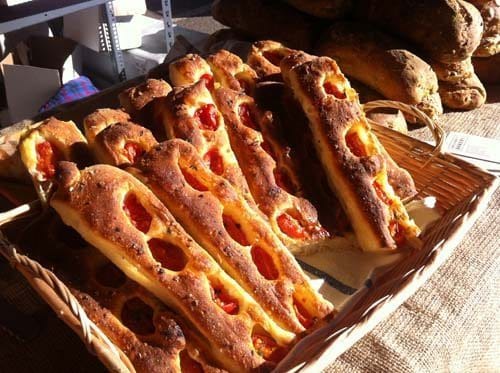 Sullivan Street Bakery may supply the The Four Seasons, Jean Georges and Gramercy Tavern, but it still represents at this local market. Mamma Parla and I had a delightfully light focaccia breadstick studded with cherry tomatoes. 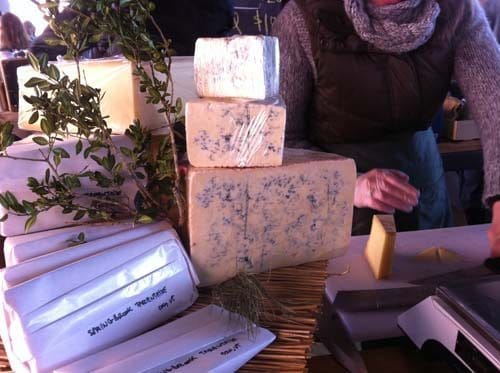 Saxelby Cheese, my favorite cheesemonger in the city, was selling cow’s and goat’s milk cheeses. We got a few varieties with big plans of saving them for Christmas. They were gone by Monday. 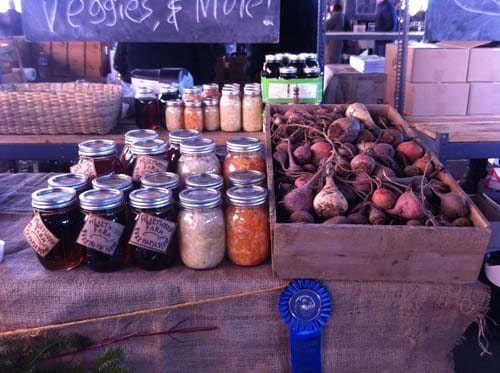 At the neighboring stall, Heartwood Farms from Vermont was selling the most beautiful white and candycane beets, which we bought for Christmas Day. We also purchased their incredible maple syrup, which I would gladly drink by the gallon. 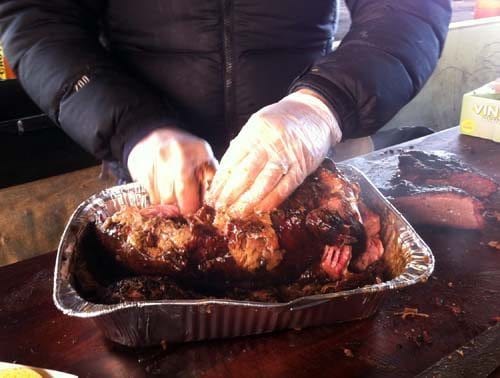 The most beautiful site at the market was watching a pork shoulder that has been cooked for 20 hours be hand-shredded. Thick strips of meat and fat were served on sliders at the Mighty Quinn’s stand (the winner for the longest line at the market; they even beat Blue Bottle!). Hugh Mangum’s pulled pork and brisket sliders were so good I’m going to Stockton Market in my home state of NJ to have some more next week. 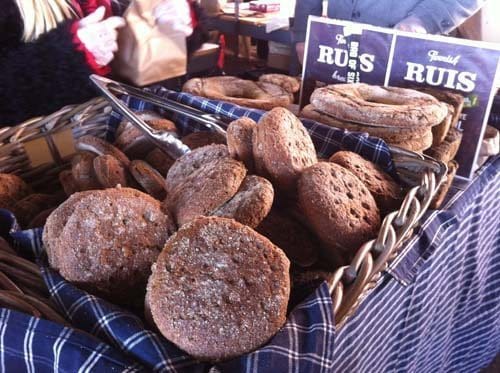 Nordic Breads of Long Island City was there selling their organic ruis (a flat doughnut-shaped Finnish bread) and gorgeous loaves of rye with sesame seeds. We took ours home and ate it with butter and jam. 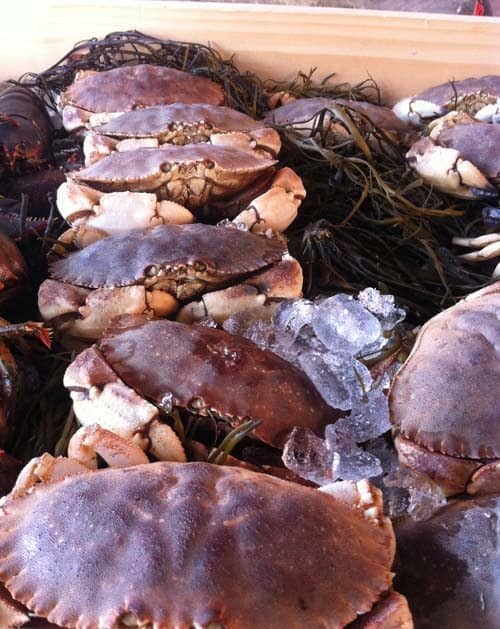 Sufficiently stocked with food to take home, we hopped in the car and set our sites on the Holland Tunnel with heat blasting, glad we had made it to the last New Amsterdam Market of the season and eager to return when it reconvenes in March. In the meantime, you can support the market by making a donation here.