The Wells, A Hampstead Gastropub 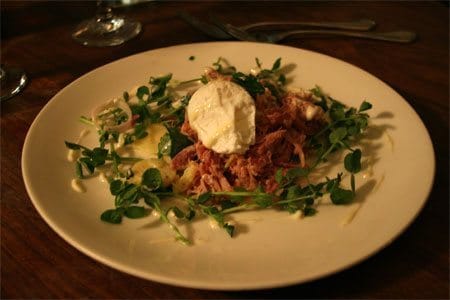 Last night I had dinner at The Wells, a gastropub in Hampstead that proves the words great, British, and food can be placed in the same sentence. Drawing heavily on local and seasonal ingredients, the menu at the Wells has plenty of British and Scottish beef and game, as well as winter produce like kale and butternut squash. Having visited the pub on a previous occasion and sampled their Scotch beef burger, I had high expectations of the dinner menu and they were all reached.

We started with shredded ham hock topped with a poached egg and dressed with horseradish cream. Clover greens encircled the dish and added their tangy, fresh notes to the ham and egg. This is one of the best dishes I have had this winter, all of the elements in perfect balance with one another. The salty and meaty ham lent its flavor to the delicate poached egg, which coated the meat with its slightly runny yolk. The dressing and greens added additional complexity to the dish with their piquant acidity. Everything about this starter was perfect. 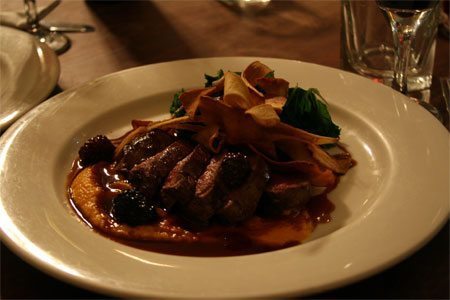 For mains, we chose a beef filet with mashed potatoes and venison with whipped sweet potatoes and curried kale. The filet was tender and juicy and the potatoes dense and creamy. My venison was cooked to perfection and paired nicely with the buttery sweet potato puree. Both mains were excellent, though the kale was far too buttery for my taste. This liberally buttered kale seems to be the dominant method of preparation in London, as I have encountered it elsewhere. Let’s call this one a matter of taste.

The only other critiscim I had of an otherwise stellar meal was that the side salad we ordered featured cherry tomatoes. A message to all chefs in London (Europe? The world?): tomatoes taste terrible this time of year. We know they are coming from greenhouses, and not necessarily from those in warm climates. The outcome is nothing short of disgusting. Use them in the summer, employ a sun-dried variety in the winter, and leave those sad, acidic, and awful cherry tomatoes out of your dishes this time of year. Give me leafy winter greens. 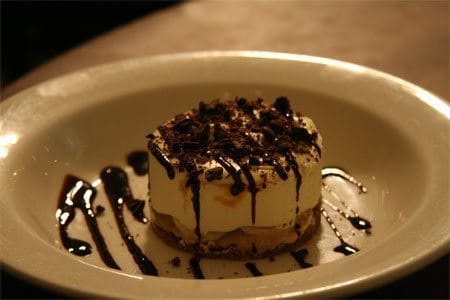 But I digress. For dessert we had a lemon panna cotta with strawberries, which paled in comparison to the luscious and delicate banoffe pie. This was my first introduction to the famous English pastry and after my second bite, I immediately wanted to order another. Cream, bananas, and toffee floated above the crushed biscuit and butter base. This dessert alone is enough to warrant a trek out to Hampstead, and once you are there, why not stick around for a burger, a steak, a pint, or at least a tip of the hat to the framed picture of President Obama displayed prominently beside the kitchen.