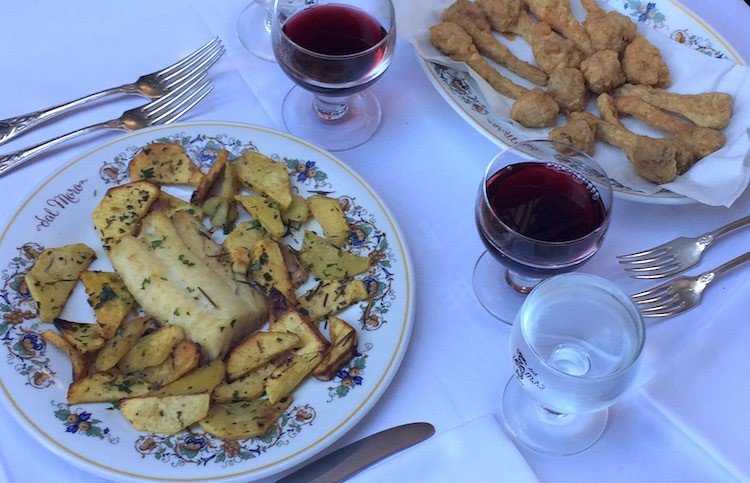 In most cases, a Roman menu featuring over a hundred items is a big old bandiera rossa signaling you’ve landed in a tourist trap. Trattoria menus in particular tend to be focused, featuring a handful of local dishes under each heading, often reflecting the season or the day of the week (giovedì gnocchi, venerdì pesce, for example). At Trattoria al Moro near the Trevi Fountain, the two-page menu packs in scores of classic and seasonal items, as well as signature dishes developed during the place’s nearly century-long history. 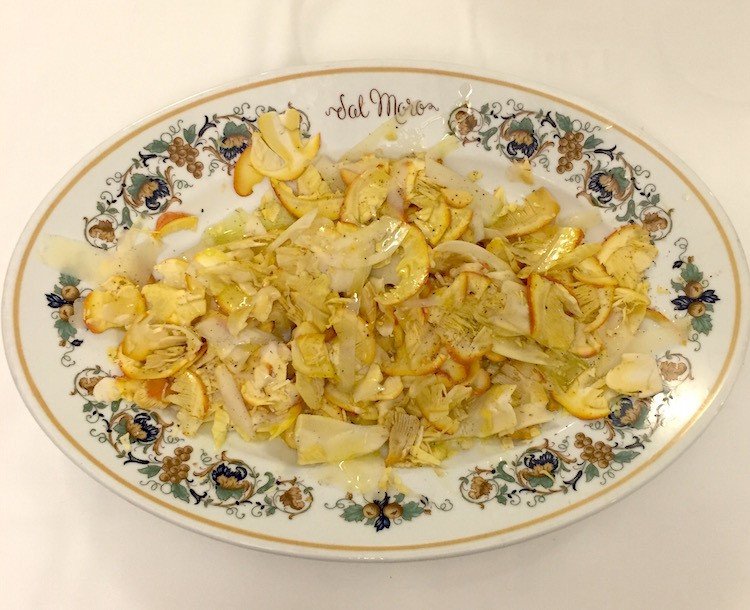 Helmed by four successive generations of Romagnolis since the 1920s, the place began humbly, slowly building a reputation among actors at the nearby Teatro Quirino. In time, it became the haunt of local artists, performers, and filmmakers, including Federico Fellini, who cast Mario Romagnoli in his 1969 film Satyricon. Over the years, it evolved from a simple trattoria to a pricey venue more along the lines of a ristorante with pressed linens and formal service–and prices to match. Today, you won’t spot many starving actors or aspiring stars in Al Moro’s three dining rooms; they have been replaced by politicians, journalists, businessmen (and, to a much lesser extent, businesswomen), and well-heeled local families open to paying €18 for a bowl of soup or €24 for a plate of pasta. 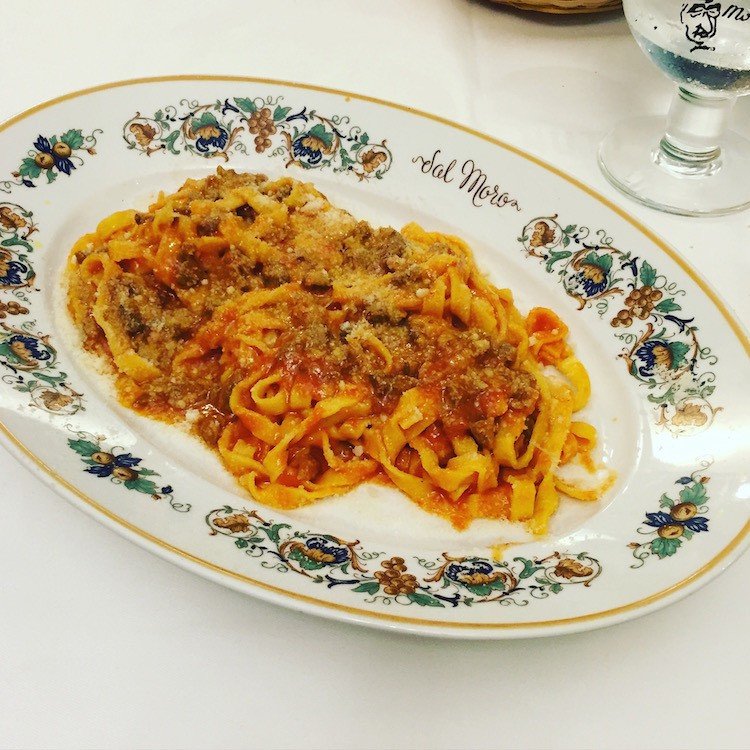 In typical Roman style, fancy patrons and decades-long regulars receive special pampering from the notoriously aloof owners. Third-generation Franco Romagnoli and his children Elisabetta and Andrea are unwavering in their duty to keep regulars happy, a devotion that can leave newbies feeling cold. To avoid any unpleasant exchanges with the owners, show up with a reservation and dress smartly–bella figura in its literal sense counts here. Also beware that if you’re still dining towards the end of service, Elisabetta lights up a cigarette (a blatant violation of smoking laws). 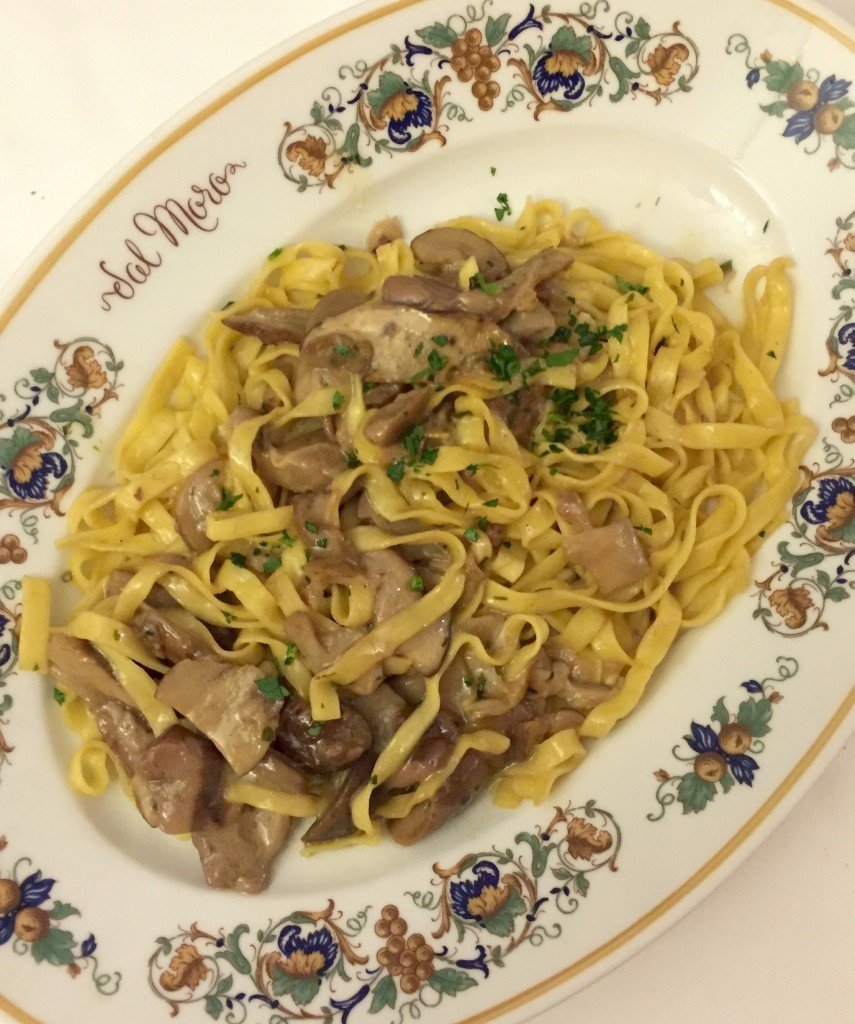 With all these idiosyncrasies why visit Al Moro? I visit for the dishes that have virtually vanished from Roman menus: lumache alla romana, snails cooked in a sauce spiked with anchovies, chile, and mint, is served around the Feast of Saint John the Baptist; cervelli e carciofi fritti, battered brains and quartered artichokes; fegato di vitella, tender pan fried liver; tagliatelle con le rigaje, fresh pasta with a tomato-sauce enriched with chicken innards. In the fall, I make regular visits for seasonal dishes like sliced Caesar’s mushroom, fettuccine with porcini mushrooms, and Montblanc (sliced table-side if you’re lucky), while in the spring, a go for roasted abbacchio (suckling lamb) with potatoes. Year-round, I enjoy spaghetti alla Moro, the house version of carbonara featuring a pancetta-enriched egg sauce seasoned with red pepper flakes. 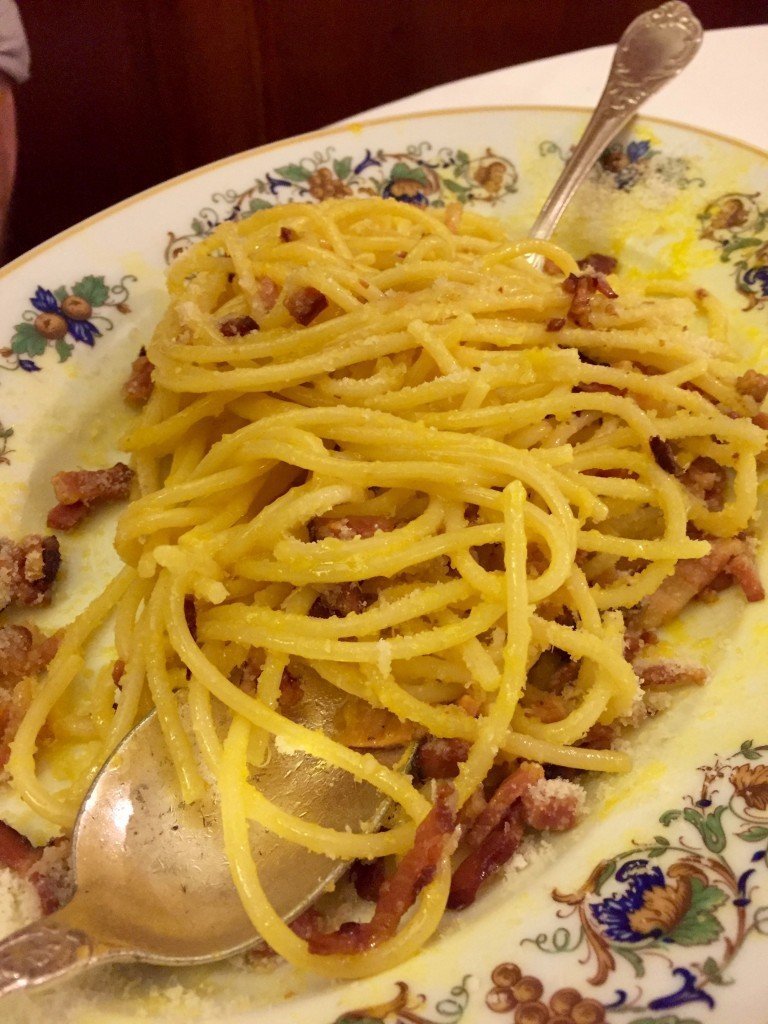 Al Moro is an unlikely place for an excellent meal, purely due to its location. It’s 300 feet from the Trevi Fountain and the outdoor patio is on Via delle Muratte, one of the most hideously tourist-packed street in town. I prefer entering at Vicolo delle Bollette where a window-paned door admits visitors to a time capsule of sorts where the walls of each dining room are plastered by posters and paintings gifted by generations of patrons and the extensive menu documents the lost and living classics of Rome. 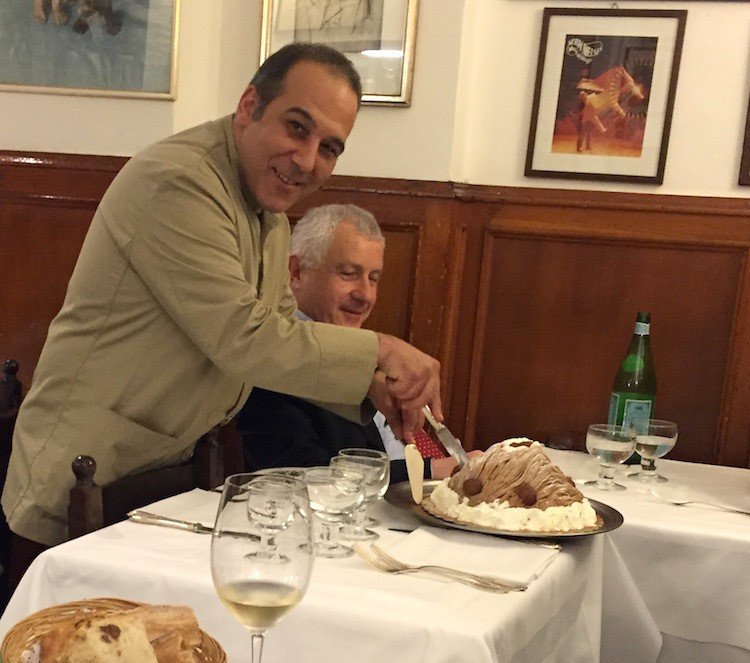 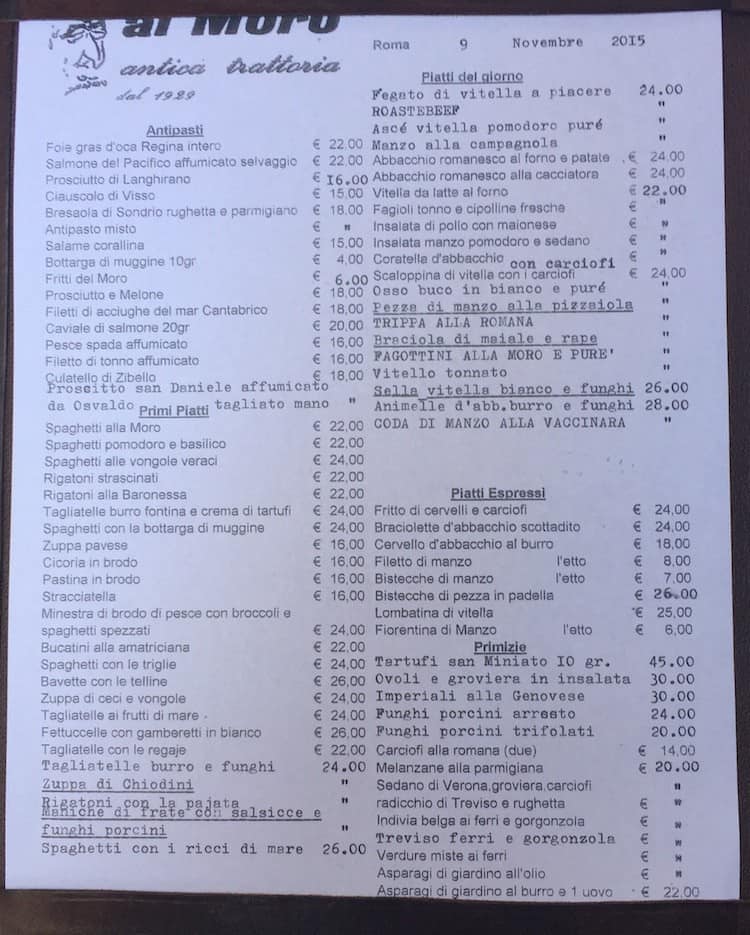 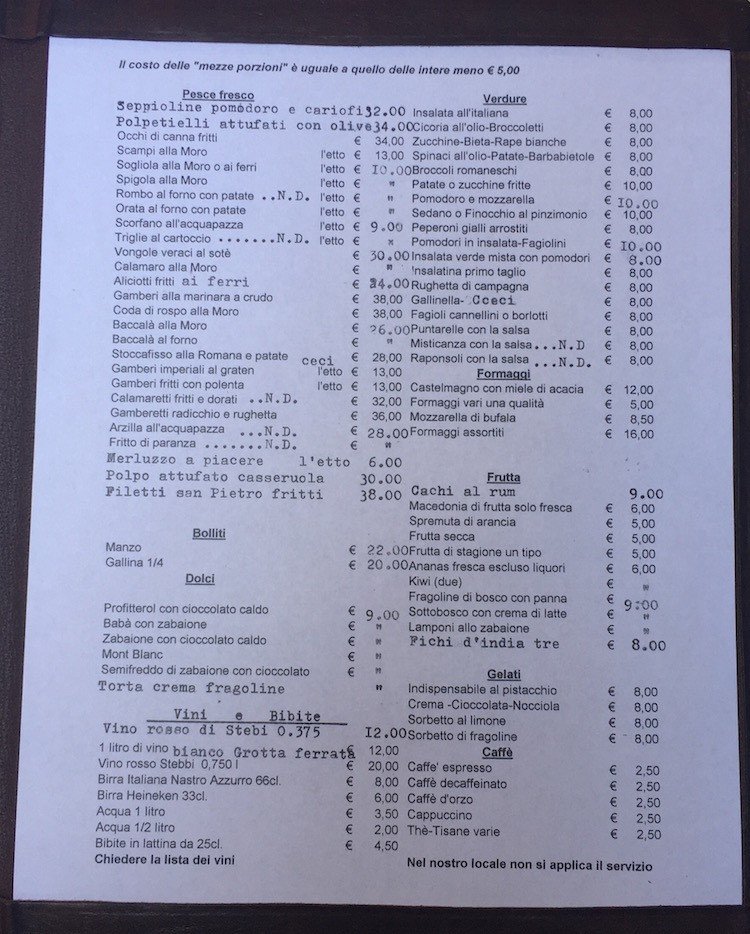