Skip to content
Home/A Taste of the Past: Roman Food Culture Flashback
Previous Next

A Taste of the Past: Roman Food Culture Flashback 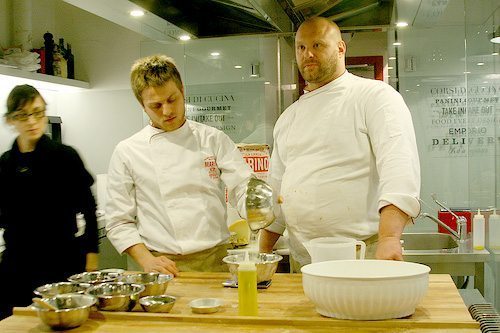 Fulvio Marino of Mulino Marino with Bonci at his pizza course.

Rome’s eating dining culture is perhaps known for naval gazing rather than innovation and many local attempts to modernize the city’s cuisine either fall flat or feel forced. There are some recent exceptions to this rule, some of which have the common thread of looking to the distant past for inspiration. I stopped by Heritage Radio Network today to chat with Linda Pelaccio on her show “A Taste of the Past” about how Roman food–and brewing–culture is looking back to old recipes and heritage grains, often with outstanding results.

Roman Baker Gabriele Bonci is single handedly responsible for raising the profie of triticum monococum (Enkir). This ancient domesticated grain is cultivated and milled in collaboration with Mulino Marino and forms the basis of Bonci’s famous pizzas at Pizzarium and bread doughs at Panificio Bonci, Open Baladin and no.au.

Gelataia Maria Agnese Spagnuolo of Fatamorgana borrows from the Kamasutra for her honey/licorice/fennel gelato, a combination that is said to provoke sexual vigor. She calls her “Dukkah” gelato, made from a hazelnut, sesame, cumin and coriander paste, “Egyptian Nutella”.

You can listen to the full segment here and stay up to date on Linda’s outstanding program
“A Taste of the Past” here.

A big thanks to Linda, HRN.org and Roberta’s for having me in the studio today! Tune into my next segment Tuesday at 5PM on Beer Sessions Radio with Jimmy Carbone.