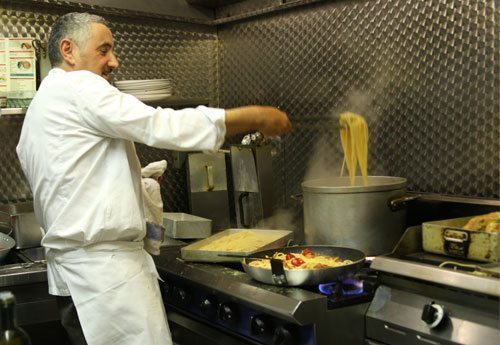 Last night Chef Arcangelo Dandini pulled off a successone. He served 72 guests at Young & Foodish’s Spaghetti Wednesday Pop-Up under less than ideal circumstances. Things got off to a bumpy start on Tuesday when Arcangelo’s sous chef Mahesh was stopped by Gatwick’s immigration authorities. In spite of having all of his documents in order, a valid passport, legal working documents, and a visa for the UK, Mahesh was detained for nearly 24 hours before being sent back to Rome. On Wednesday morning, with less than 8 hours to go before the event, there was still no one to assist the chef. Then Giorgio Locatelli came to the rescue and sent Salvo Sardo from his own kitchen to fill in. 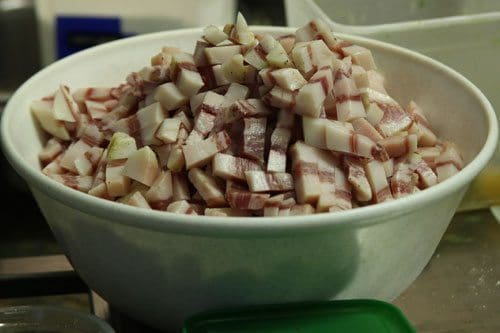 While most chefs who have previously participated in the popular Spaghetti Wednesday pop-up have their own kitchens in London to use for prep, Dandini didn’t have that luxury. With little more than three hours prep time, he and Salvo pulled together a phenomenal meal, made with an lengthy list of ingredients of both British and Italian origin. In addition to the tremendous produce supplied by Andreas Georghiou, there were vermicelli di gragnano from Pastificio dei Campi, anchovies from , extra virgin olive oil from Giulio Campello, pecorino romano from Caseificio De Juliis, 48-month aged parmigiano reggiano, guanciale from Amatrice, and tomatoes from Mount Vesuvius. The parmigiano, capers, and pasta were sourced from the incomparable Melograno Deli. 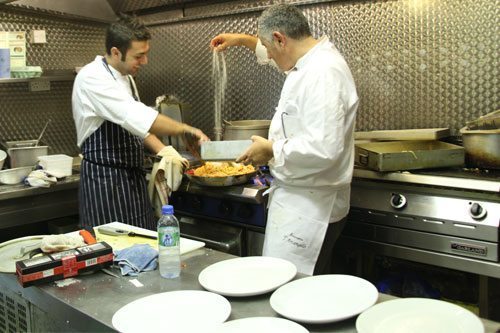 At 6:45pm the first 16 guests filed in. There were 5 seatings altogether and roughly every half hour a new group of hungry guests arrived. To start, they were served an amuse bouche consisting of Torrente’s anchovies on buttered toast and English pears with pecorino romano and parmigiano reggiano. This was followed by an antipasto misto of supplì, potato croquettes, and an aromatic herb frittata. Next was the vermicelli di gragnano alla matriciana, a rich mixture of tomato sauce, guanciale, and grated pecorino romano cheese. This traditional dish was followed by an Arcangelo original: white chocolate soup with capers, candied ginger, and Giulio Campello’s olive oil. 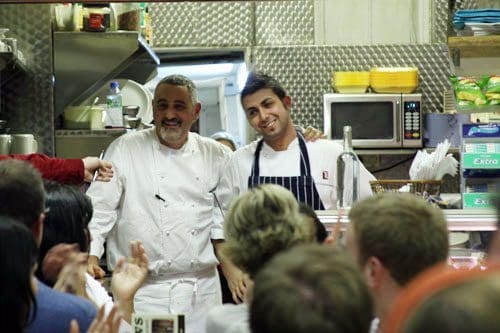 Mahesh was missed, but Arcangelo and Salvo managed to pull off the dinner, serving civilized traditional Roman fare to an appreciative crowd. The Roman fun continues this weekend at Prufrock Coffee where I’ll be Young & Foodish’s special guest for a Coffee Saturday Pop-Up.