Craft Beer and Burgers at Blind Pig in Rome 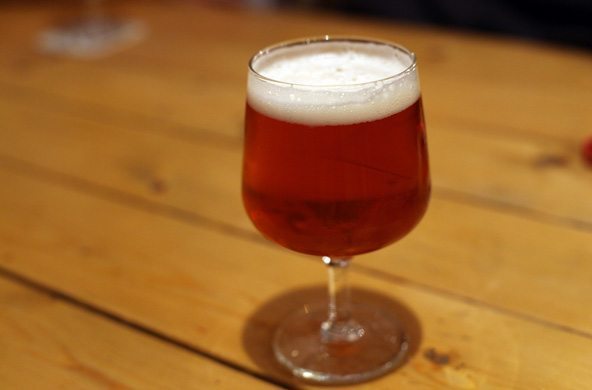 I don’t know about you, but I’m in the mood to read about beer. I have been spending some quality time in the US with friends, family and colleagues and am really enjoying the American craft beer scene. But I would be lying if I didn’t say I miss my favorite Roman watering holes, so I asked Jen Tarbox of Context Travel to submit a guest post on one such destination. Jen writes…

“The first time I entered Blind Pig I was a bit surprised. The decor wasn’t the typical Irish pub vibe that is so prevalent in the city center. Instead, tables were made out of what resembled liquor crates and Prohibition era photos hung on the wall. One corner hosted a piano. The atmosphere is an ode to the 1920s and 30s–even the name evokes Prohibition–but the menu focuses in beer rather than liquor.

I recently returned to Blind Pig to try their relatively new burger menu. Rome has sort of a burger trend thing happening right now, but most patties are nothing special. At Blind pig, there are about 10 burgers to choose from, each named for a Prohibition era gangster. I ordered a Frank Nitti, which is a chickpea burger with salad, sun dried tomatoes, artichoke, eggplant and smoked provolone cheese. My friend got a Machine Gun Kelly, 150g of beef with pecorino cheese, eggplant and barbecue sauce. We split an order of fries, which were hot and crispy.

The burgers are all homemade and the meat, bread and vegetables are all fresh, bought daily from the market. They are tasty without trying too hard like some other places in town. They are relatively cheap, too, just €6–as opposed to €18-22 at places like Cafe Propaganda.

All the beers on tap and in bottles come from small producers from all over Europe and the States. A pint of beer costs around €4. Every Monday, Blind Pig hosts an aperitivo, which begins at 7:30pm. For just €5, you get a pint and a mixed vegetarian plate.

In all Blind Pig is a great spot for a straight forward, satisfying burger washed down with a pint or two of craft beer. Blind Pig is located at Via Gino Capponi 45 and is open Monday through Saturday from 6pm-2am and Sundays from 7pm until 2am.”

Thanks Jen for that post! I had a very decent burger there back in December and it beats the hell out of those wannabe designer burgers in town. You can find Jen’s nascent blog Tiny Bites here.