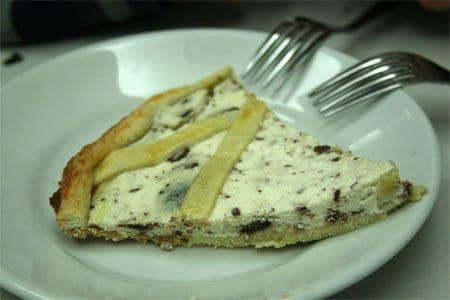 For me, ricotta desserts are more than just rich, delicious temptations. They are slices of history that tell of Rome’s past. A sliver of ricotta crostata (tart), cassola (pancake), or torta (cake) brings two eras of Roman history to mind. The first is antiquity, when Romans used honey to sweeten locally produced sheep’s milk ricotta to make desserts. In his De Agricultura Cato gives us the recipe for Savillum, an ancient cheesecake made by baking ricotta mixed with honey, egg, and flour.

A far more significant era that ricotta desserts evoke is late 15th century Rome. In 1492 Ferdinand and Isabella expelled Jews from Sicily and Sardinia (a few years later Jews would be banished from the rest of Spanish territory in Southern Italy). Some of Sicily’s 35,000 Jews fled to Rome, bringing with them their Sicilian, Arab-influenced ricotta recipes. The Arabs introduced cane sugar and reintroduced citrus to the island in the 9th century. Sicilian ricotta desserts were produced by Muslim, Christian and Jewish communities using sugar and citrus, so when Sephardic Jews came to Rome in the late 15th century, they brought their culinary traditions with them. Today, ricotta desserts are a prominent part of Roman Jewish cuisine and, like other typical Jewish dishes like carciofo alla giudia, they have been co-opted by Rome’s non-Jewish community and are widely available in restaurants throughout the city.