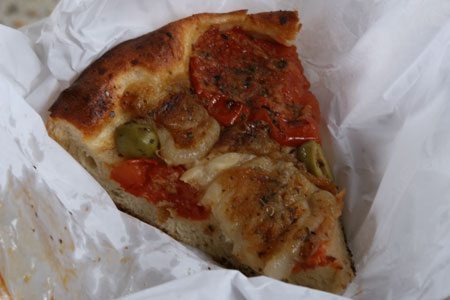 Yesterday I went to Via Ostiense for a bit of “research” at Gelateria Fata Morgana. I was fully planning to eat gelato for lunch when in a flash of genius I decided to take a detour to Panificio Passi in Testaccio, a bakery known for their stellar pizza rossa and pizza bianca. I was tempted by both, but ultimately settled on a slice of thick focaccia with onions, tomatoes and olives. The onions were cooked to the point that they just dissolved upon contact. The focaccia would have been perfect with an extra pinch or two of salt, but the lack thereof hardly slowed me down.