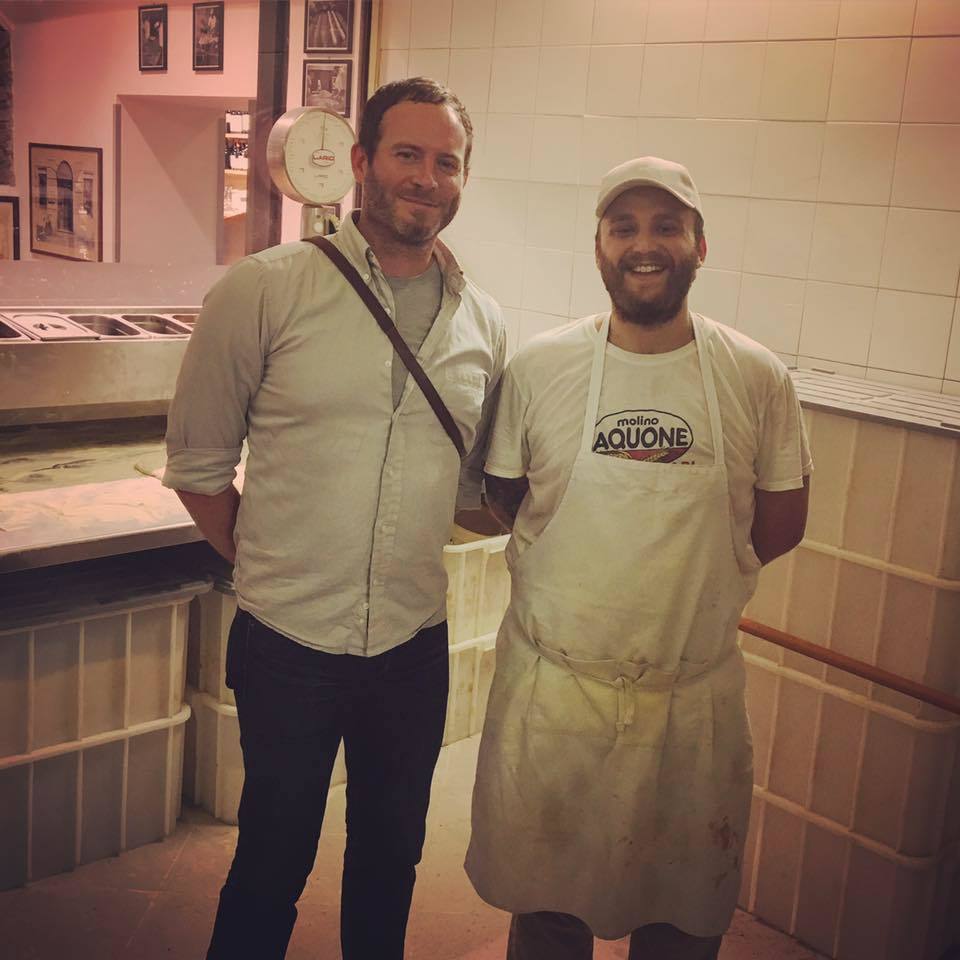 It’s hot in Rome and there are few places more oppressively infernal than next to the ovens at Antico Forno Roscioli. I asked Cesare Agostini for some baker’s tip for keeping cool; Cesare (24) came to Italy from Ottowa, Canada three years ago to intern at Antico Forno Roscioli. He never left. Now he runs the daytime baking program alongside Mauro Modugno. He offered up this recipe for friselle, baked dough rings known for their long shelf life. They are deliberately intended to be too hard to eat on their own, so to eat them, they must be softened, ideally broken up and served with a flavorful seasonal topping. Cesare recommends burrata, grilled peaches, and arugula, but feel free to get creative with the friselle toppings. I love breaking up with friselle and softening them with hand crushed tomatoes, a drop of water, olive oil, and a touch of white wine vinegar, then tossing with capers, tuna, olives, and oregano. 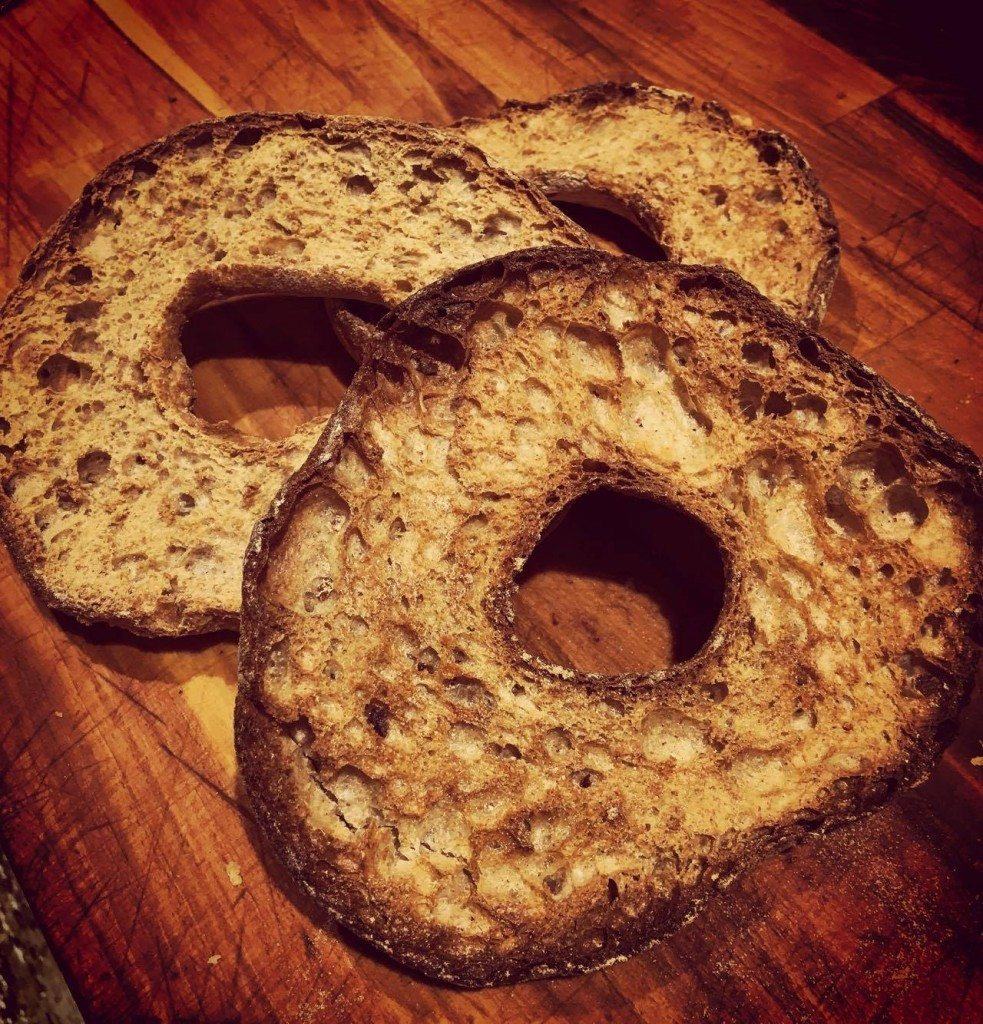 To start, you’ll need to prepare the biga, a classically Roman type of “pre-ferment”, which gives a more complex flavor and a more desirable dough than would be achieved with brewer’s yeast alone. The biga must be made the day before you plan to bake the friselle.

Using a mixer with a dough hook attachment, combine the flour, water and yeast in a medium bowl and mix until incorporated, about 8 minutes. Cover the bowl with plastic wrap and place in the your refrigerator for 24 hours.

Using a mixer with a dough hook attachment, mix the flour, biga, salt, yeast, and 825 grams of water in a medium bowl on speed 1 until the water has been absorbed, about 5 minutes. Continue mixing, adding the remaining water about 100 grams at a time until all has been incorporated. Mix for 3 minutes more.

Transfer the dough to a large, lightly oiled bowl, cover with plastic wrap, and allow the dough to rise in the warmest part of your kitchen until it has almost doubled in size, about 2 hours.

Meanwhile, dust a clean, dry work surface with flour. When the dough is ready, transfer it to the work surface and cut it into 6 pieces of equal size using a dough scraper or a knife. Gently roll each piece on the work surface to form a ball. Dust with flour, cover with a towel, and allow the dough to rest for 20 to 30 minutes.

Using your hands, poke a whole in the center of each dough ball and gently stretch the dough to resemble the size and shape of a bagel. Set aside to rest on a lightly floured baking tray for 20 minutes. 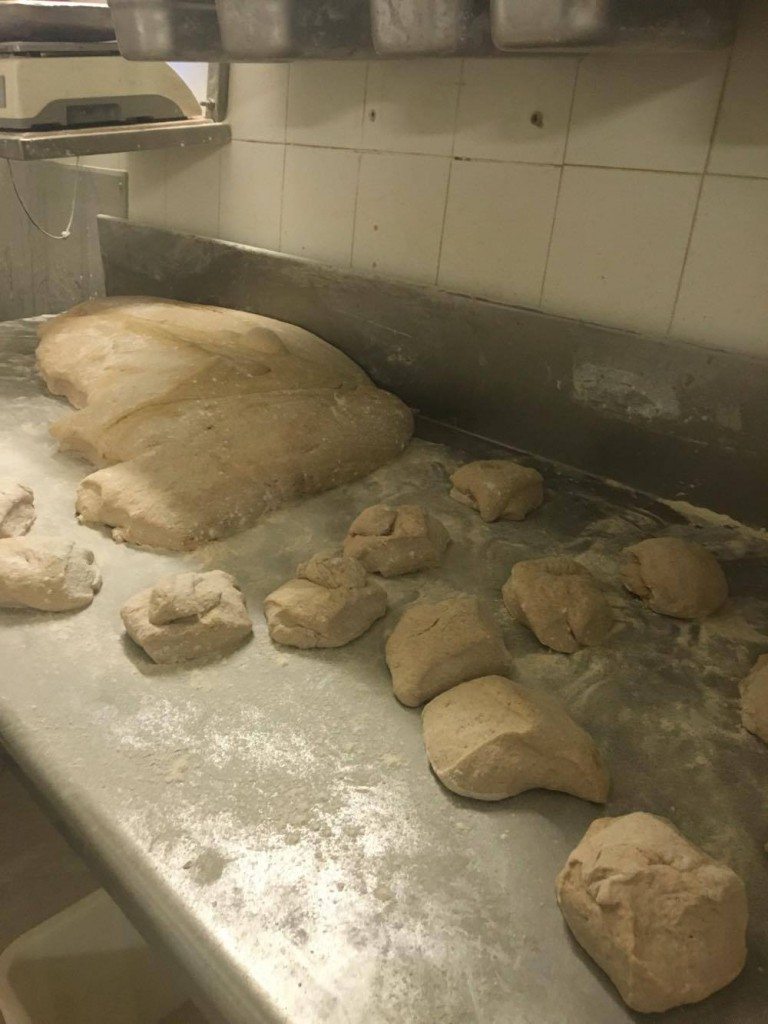 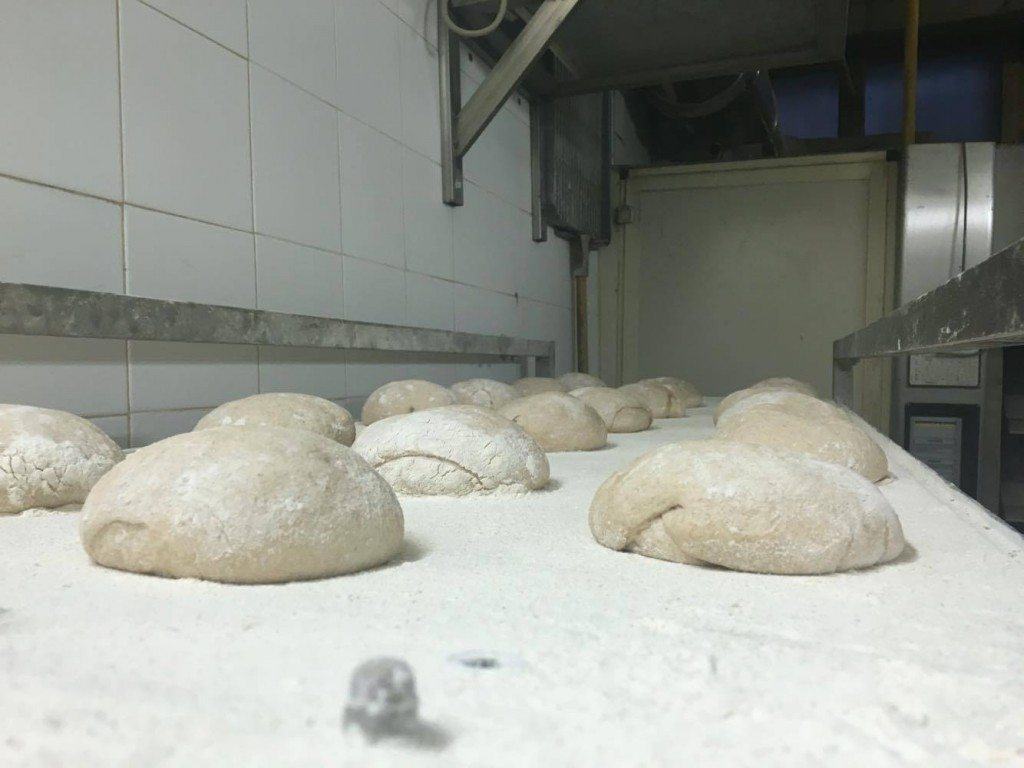 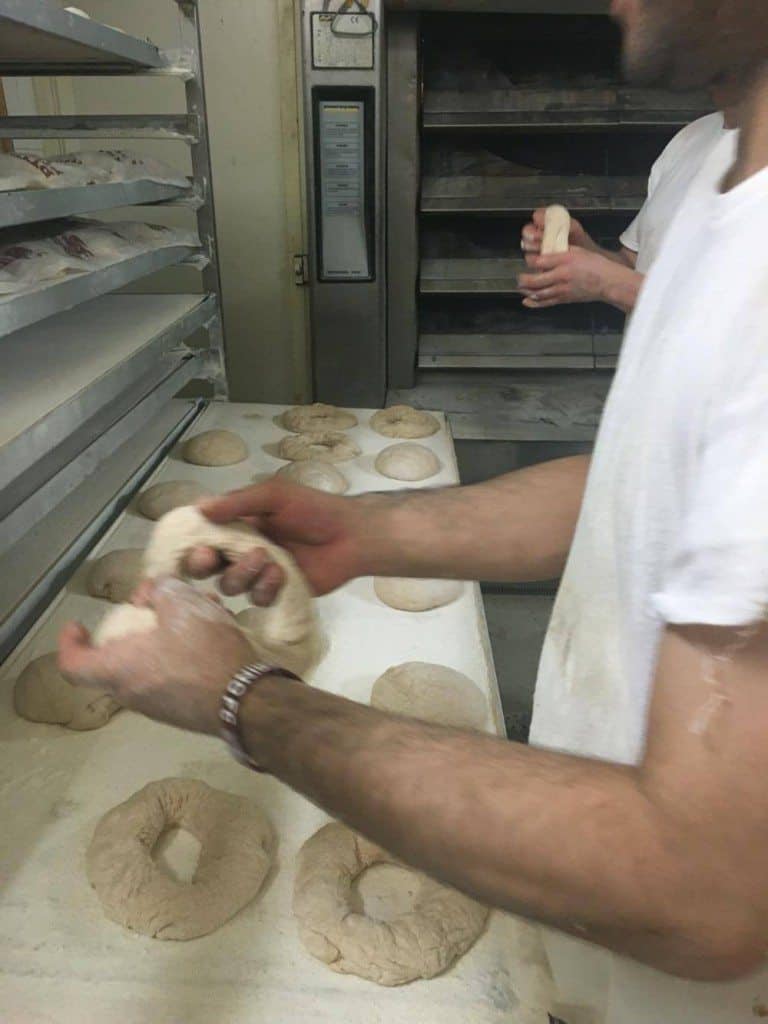 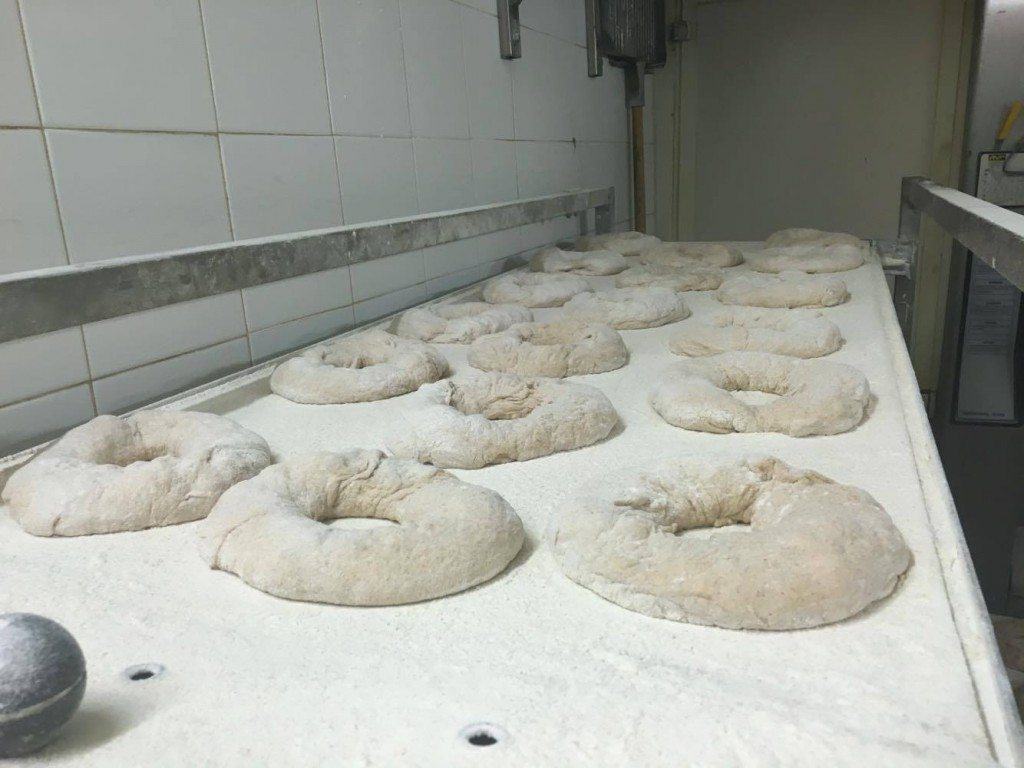 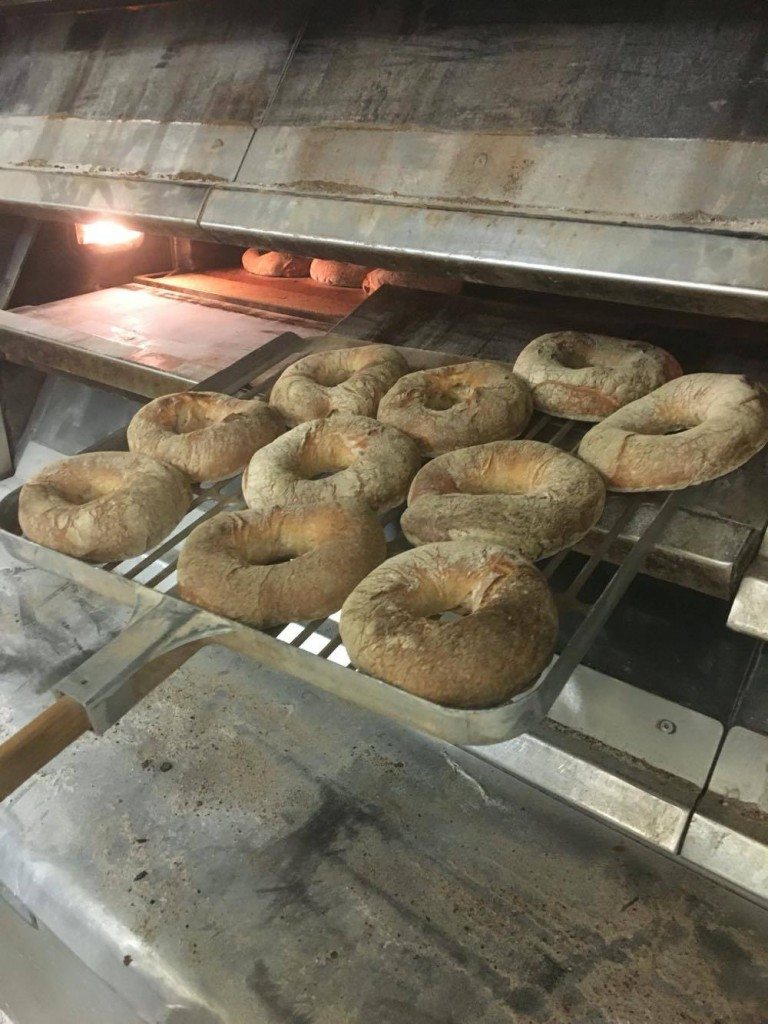