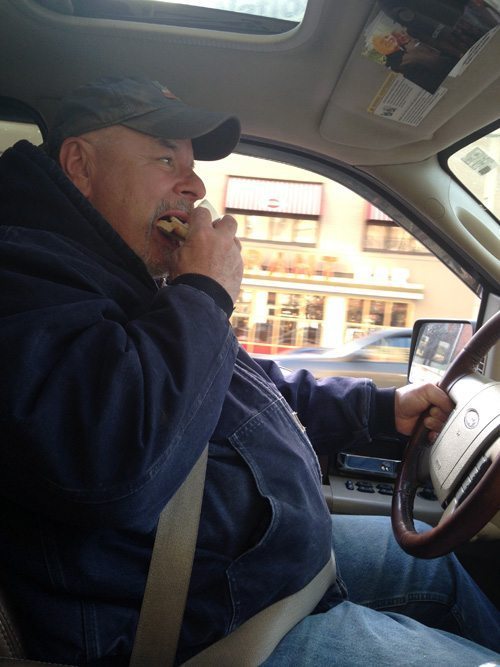 Living so far from New Jersey has fewer benefits that I had originally predicted as a teenager. When I left home for college in 1998, I could’t escape fast enough. But as I have matured, I have become increasingly enamored of the Garden State. There are many things about my native land that I hold dear: tax free shopping at our numerous “mwalls”, WaWa, hoagies, jug-handles, going down the shore, Jersey Fresh produce, the list goes on. But it is the distance from my family that has created the biggest void. Fortunately, my father often bestows stories upon me which make me feel closer to home. More often than not, they are written in caps. Occasionally they are hand written. In the most recent correspondence, the story of my great-grandmother’s pizza arrived in email form. 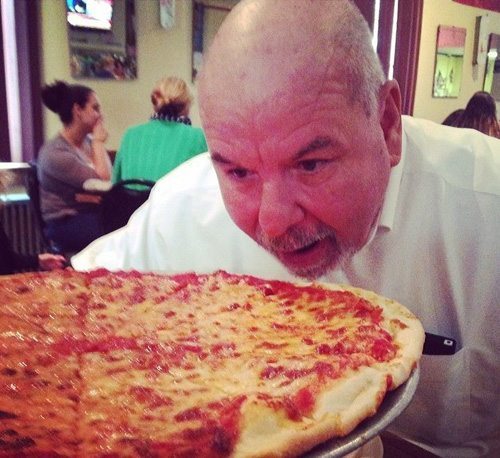 Pizza snacks earlier this year at Conte’s in Princeton.

Though she died when I was very young, I have vivid memories of visiting her small apartment in Highland Park, where she lived since immigrating to the United States from rural Sicily at the turn of the 20th century. For the entire duration of the early 80s, I marveled at her copy of Da Vinci’s Last Supper that hung in the dining room, convinced it was the original. (I have no idea where I got this idea from or why I knew about Da Vinci at age 4.) She dried ravioli on sheets laid out on her crocheted bed spread. Ravioli al pomodoro were her signature dish. By the time I was born, she was well into her 80s and had abandoned the bulk of her Italy-inspired repertoire, paring it down to the essentials. I don’t think I ever ate her pizza, but I recall my father praising it. The account that follows took place at Franklin Pierce College in New Hampshire. Papa Parla reports:

ONE OF THE JOYS OF MY CHILDHOOD WAS MY GRANDMOTHER’S PIZZA, A RECTANGULAR CREATION OF SAVORY GARLIC, TOMATO SAUCE, MOZZARELLA AND PARMESAN CHEESE, BASIL AND A DOUGH RICH WITH OLIVE OIL. IRONICALLY, MANY NEW YORK/NEW JERSEY PIZZERIAS OFFER A CHARACTER-FREE RENDITION OF “GRANDMA PIZZA” LIKELY MADE BY SOMEONE NOT NAMED GRANDMA. AND I BET THEY DON’T EVEN HAVE A MUSTACHE, HER MOST PROMINENT FEATURE!

MY GRANDMOTHER MADE HER PIZZA IN STEEL PANS, BLACKENED NO DOUBT FROM YEARS OF BAKED-ON OLIVE OIL RESIDUE. THE SAUCE AND DOUGH WERE SIMPLE YET COMPLEX SOMEHOW. TANGY TOMATO WITH LOADS OF GARLIC TOPPED THE GREAT, SLIGHTLY CHEWY DOUGH. THE CHEESE WAS A COW’S MILK MOZZARELLA NO LONGER FOUND TODAY AND FUNDAMENTAL TO THE ESSENCE OF GRANDMA’S PIZZA. THE CLOSEST COMPARISON IS TO THE DOUGH WAS THAT OF THE PIZZA BARESE THAT WE HAD IN BARI.

IN THE SUMMER OF 1969 (NO REFERENCE TO BRYAN ADAMS), JUST BEFORE GOING OFF TO COLLEGE, I JOKINGLY ASKED MY GRANDMOTHER TO SEND HER “FAMOUS” PIZZA TO ME VIA MAIL WHEN I WAS AWAY IN NEW HAMPSHIRE. A FEW DAYS INTO MY FRESHMAN YEAR, I RECEIVED A NOTICE IN MY POST OFFICE BOX IN THE STUDENT UNION THAT I HAD A PACKAGE. EVEN BEFORE I OPENED MY MAIL BOX, THE ENTIRE BUILDING SMELLED OF GARLIC. I WALK OVER TO THE POST OFFICE WINDOW WITH MY NOTICE SLIP TO RETRIEVE MY SURPRISE PACKAGE. AND WHAT A SURPRISE IT WAS. THE CLERK HANDED OVER A BOX WRAPPED IN SHOPPING BAG PAPER HELD TOGETHER WITH HEMP TWINE AND SOAKED THROUGH WITH OIL…OLIVE OIL. I WAS BOTH EMBARRASSED AND ELATED. BY NOW, THE ROOM REEKED OF GARLIC.

I TOOK THE PACKAGE BACK TO MY DORM ROOM, HOLDING IT BY THE STRING THAT HELD THE WRAPPING TOGETHER. COULD IT BE, YES IT COULD, SOMETHING SPECIAL, SOMETHING GOOD. I WORKED MY WAY PAST THE TWINE AND PAPER BAG WRAPPING REVEALING A CARDBOARD BOX ALMOST DRIPPING WITH OIL. I CUT THROUGH THE PACKING TAPE. THIS UNEARTHED A SERIES OF ALUMINUM FOIL LAYERS. MY MATRYOSHKA DOLL! CAREFULLY PEELING BACK THE FOIL, I CAME UPON 3 GRANDMA PIZZAS. I THOUGHT TO MYSELF “THERE’S NO WAY THAT THIS COULD BE EDIBLE”. IT SPENT WHO KNOWS HOW LONG IN TRANSIT UNDER UNSAFE FOOD SANITATION CONDITIONS! SHOULD I? COULD I? WOULD I EAT THIS GIFT OF DUBIOUS HYGEINIC STANDARDS? ANSWER: OH YEAH. ANY ONE OF A THOUSAND FOOD BORNE BACTERIA COULD NOT SURVIVE THE COPIUS AMOUNTS OF GARLIC (AND PROBABLY HOLY WATER) THAT PERMEATED THE TOMATO PAINTED DOUGH. MY ROOMMATES AND I CONSUMED THE PIZZAS IN SHORT ORDER WITH NO CONCERN. NO ONE DIED.

SO, FOR THREE YEARS, AT REGULAR INTERVALS, THERE WAS AN OILY, GARLICKY, CRUMPLED PAPER BAG PARCEL DELIVERED TO MY COLLEGE MAIL BOX AND THE SOUR-FACED POSTMASTER ALWAYS HELD IT OUT TO ME, ARM EXTENDED, PINCHING THE HEMP STRINGS WITH TWO FINGERS. IF HE ONLY KNEW WHAT FORTUNE WAS CONTAINED WITHIN.

*Not the pizza in question.