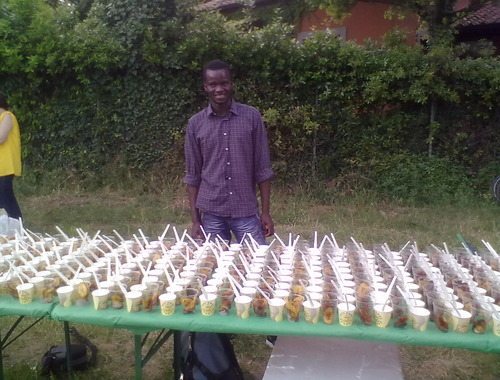 In Italy, the obstacles to creating a small food or beverage business are daunting. The minimum first year investment ranges from €75,000-100,000* for basic equipment, rent, staff, legal advice and other incidentals. Public funds to fuel startups are scarce. Health code requirements and an absence of Cottage Food Laws make it expensive to enter business and illegal to sell food made at home. Young people and immigrants are at a particular disadvantage. It’s no wonder industrial foods now rule this country. This situation may not be unique to Italy, but in a country praised for its artisanal food and creativity, the current state of affairs paints a bleak picture of things to come.

That is why I feel so compelled to support small local food businesses like Yogurt Barikamà, which was founded by three young African men who participated in the revolt against brutal working conditions in Rosarno, Calabria in 2010. One year later, they began making yogurt in the ex-Snia on Via Prenestina in Rome. Their business has grown slowly but surely, they have been joined by a fourth partner and they now supply several markets in Rome, as well as a number of G.A.S. (solidarity-based purchasing groups).

Barikamà produces yogurt from organic milk purchased from Casale Nibbi. Due to inadequate refrigeration facilities at the ex-Snia, they can only produce as much as they can deliver by bicycle. They would greatly benefit from a refrigeration unit and on May 10, The Rome Digest will be holding a fundraiser to raise money for a commercial fridge. Parla Food will match the funds raised. You can get involved, too, by joining the event or making a donation via PayPal to katie@katieparla.com.

UPDATE: Success! TRD & Parla Food raised €1420 for Barikamà. Thanks to everyone who supported our efforts!