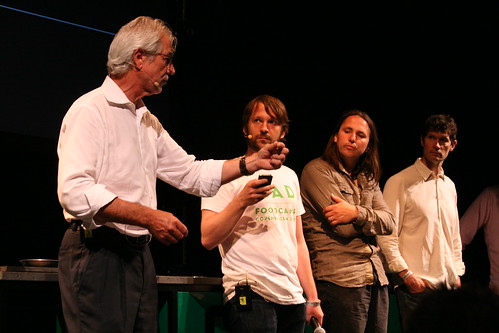 The first annual MAD Food Camp Symposium, entitled “Planting Thoughts”, concluded yesterday. The two-day event brought together chefs, farmers, foragers, and scientists from all over the world to confront the future of food. It’s tempting to suppose that the event was an elitest smug ego-fest, as some tweets and blogs have quipped, or to interpret what transpired there as some preachy cultist food orgy (ok maybe a few of the quotes could pass for food snob commandments). I think, instead, there was a lot of sound logic backed up by science and a real desire to improve food security, quality and culture for the better. And not just for the chefs and patrons of the world’s leading restaurants, but for everyone. The focus of the event was real people and real producers who face serious obstacles. I’ll be writing up a full profile of the event for an American publication soon, but in the meantime I wanted to plant a few seeds of thought in the form of verbatim quotes. Here’s what some of the the illustious speakers had to say: 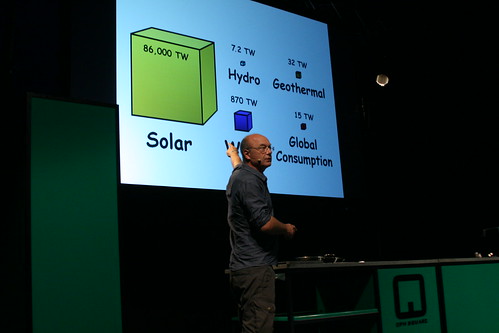 Danish scientist Tor Nørretranders on monoculture: “Sixty perecent of calories consumed by humans come from four fucking crops.” This brilliant man, engaging speaker, and all around potty-mouth talked at length about the dangers–ecological and economic–of a society that depends too heavily on single species. He called for a “Hi-tech stone age”, an era in which we diversify the crops that we grow and consume, get back to wild plants and the foods we were designed to eat, and use science to do so.

The soft spoken British forager Miles Iriving’s delivered a powerful message, “There is treasure in the woods and fields.” Simple, direct, and true. There is plenty of spontaneously growing food out there for the taking. Looking for it gets you in touch with nature and your surroundings. You can read more about him and his work on The Forager website. 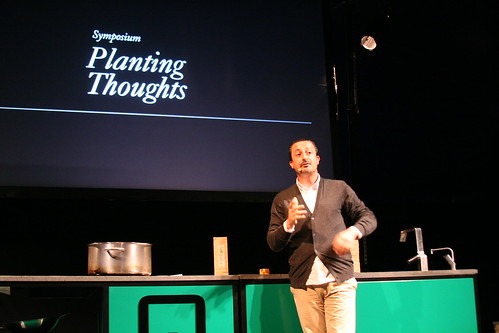 Hans Herren of the Millenium Institute proclaimed, “We don’t need to feed people. We need to nourish them! And in a way that we can keep doing it for a long time.” He explained that we currently produce enough food for everyone on earth–an estimated 4,600 calories per person per day–but “we grow the wrong food in the wrong places in the wrong way.” The result is poverty, waste, and obesity. Currently, the vast majority of seeds used by farmers is in the hands of three large corporations. But he added, “Seventy percent of what we eat is made by small farmers…Change is attainable and it can really nourish the people…Are we going to do it now or later? Later isn’t really an option.”

Kemal Mouzawak, Lebanese chef and founder of Souk El Tayeb, Beiruit’s first farmer’s market, was simple and poetic. His message was, “Producers have jewels in their hands.” We need to give dignity and pride to those who produce our food. Souk El Tayeb puts producers directly in contact with consumers, provides good food to city dwellers, and give tangible incentives to villagers to keep making traditional foods. 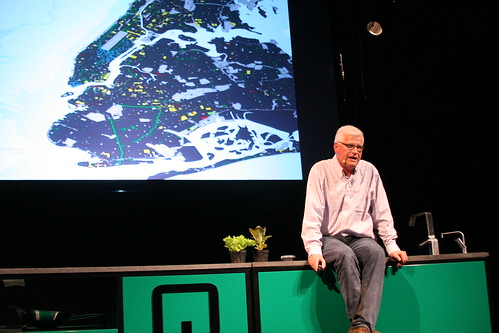 Thomas Harttung used facts and figures to demonstrate that, contrary to popular belief, “small-holder agriculture is compatible with large scale agricultural models.” He added that we do not have to rely on the countryside alone for our food. By 2080 an estimated 80% of people will live in cities (compared to 50% now). “We can produce 50 tons of food per hectare sustainably in cities.” NYC alone has the potential to created over 3 million tons of food each year using rooftops, parks, and private yards.

Stefano Manucso, a plant neurbiologist, spoke about plant intelligence and the value of wild plants, “We evolved eating wild plants. Nettles have more vitamin C than oranges, more calcium than cheese, and three times the iron of spinach. Wild plants are our original foods.” 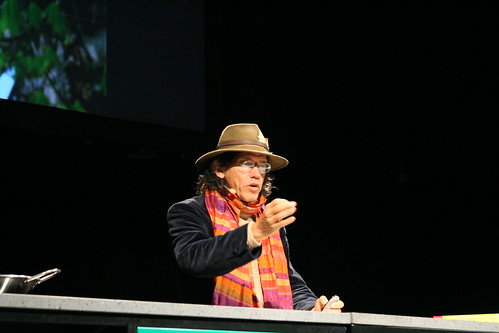 Francois Couplan is a phenomenon.

One of the most interesting speakers (and human beings in general) was Francois Couplan, botanist and author, who lived for several years alone in the wild. His whimsical statements were not without merit. “The postmodern world will be about cultivating…living life with a hunter-gatherer spirit”, he said. “Foraging raises consciousness and changes the way we look at the world.”

Due to Hurricane Irene, Massimo Bottura was stuck in NYC and couldn’t make it. He sent a letter and film instead. His statements were perhaps the most bold: “Dig below the surface, question everything…Without ethics our jobs as chefs is not complete…treat your mouth like a temple…Love for the future makes us better chefs.” You can watch the film Il Ritorno here.

Perhaps the most moving speaker of the Symposium was Ben Shewry, a chef from New Zealand whose restaurant Attica in Melbourne is internationally renowned. But he spoke little of his restaurant and almost singularly about his personal relationship with food, his love of the sea, and the dedication to his family that pushes him to respect nature.

The true results of MAD Food Camp will become evident over the next months, even years. I will be following the progress of some of the chefs and producers I met and will report back!