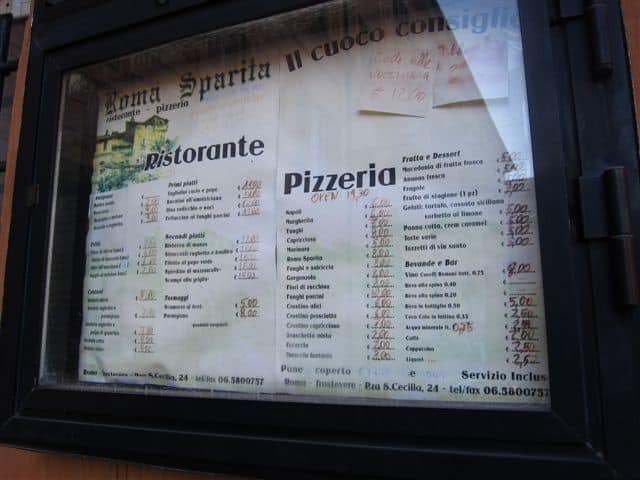 There was a time when I loved Roma Sparita, a trattoria on the quiet side of Trastevere. Now I’m not going to point a finger at my beloved Bourdain, but the place got shady after Tony stopped by for a bowl of cacio e pepe on No Reservations. The place never had outstanding food across the board. But the cacio e pepe was dreamy–it still is come to think of it–and eating outside in Piazza Santa Cecilia is a gift. But the restaurant’s treatment of tourists took a turn for the worse last year: cacio e pepe excluded, the food quality slid, and I have heard one too many horror stories of clients I sent there getting mistreated. I did my part (sorta), pulling the restaurant from guidebooks and my web based app (Grano style…Don’t mess with Parla’s people, son.) But I never did inform the restaurant that the jig was up. And apparently I neglected to strike Roma Sparita’s name from old posts. I dropped the ball.

But, alas, it is not too late to save potential diners from being taken advantage of at this den of thieves. I now present an email sent to me by Michel Q. Its contents are eerily similar to how two separate sets of clients were treated this spring:

In Rome, we tried many of your recommended places, including Pizzarium, Trattoria Monti, Palatium, L’Arcangelo on a Thursday (for the wonderful gnocchi and great secondi). The only place we were disappointed in was Roma Sparita. We had reservation for a Saturday evening and had great expectation about trying our first “cacio e pepe”, which we enjoyed immensely. We followed with secondo and dessert. When our bill was delivered by someone who looks like the owner (?), we were told that it did not include a service charge. That was a big surprise to us as we had just arrived from Puglia where we had never faced a service charge. Also, I did not recall seeing a mention of it on the menu. We discussed this with a couple of French people seated at a table next to us who had been confronted with the same request before. I decided to pay the bill (62.50 Euros) with two notes of 50 Euros. In return, I received a change of 27.50 Euros and no bill to substantiate the amount of 72.50 Euros. They had “taken” a service charge of 10 Euros, which amounted to 15%. I believe this to be plain thievery, especially in view of the following. The next day, a Sunday, we passed by the restaurant in the afternoon when it was closed to visit the Santa Cecilia church and went to look at the menu displayed to the left of the entry door. The menu clearly displayed at the bottom right “servizio incluso”, we actually took a picture of it.

I am sure that the Italians are not asked to pay a service charge. Had we known that the menu displayed at the entrance said “servizio incluso”, we would have refused to pay the service charge. This case is, in my view, even worse than the case of the Grano Restaurant discussed on your blog. Where I did make a serious mistake is in not asking for a bill with a line specifically indicating a 15% service charge. In all of our dining in Rome, only one other place added a service charge of 10%. It was at Ai Spaghettari (also in Trastevere), but there it was printed on the menu and listed on our bill which we still have. L’Arcangelo Armonia’s menu shows a 10% service charge but it was not added to our bill when we had lunch there.

The other thing I might add, it did look like foreigners were all seated together in the same section of the veranda, that is on the first row of tables as you enter. There were of course plenty of locals that busy night but there was no mixing of the two. Make it easier for them to announce that a service charge would be added.

Thanks so much, Michele for your detailed report. And your assumption is right. Roma Sparita never asks Italians or Italian speakers to pay a service charge. And the reason they did not bring a receipt is because they did not register the sale so as to evade paying taxes. I have duly struck Roma Sparita from the Easter dining and Sunday dining, as I had meant to do this spring. Apologies for my negligence and I’m glad you enjoyed the other recommendations!