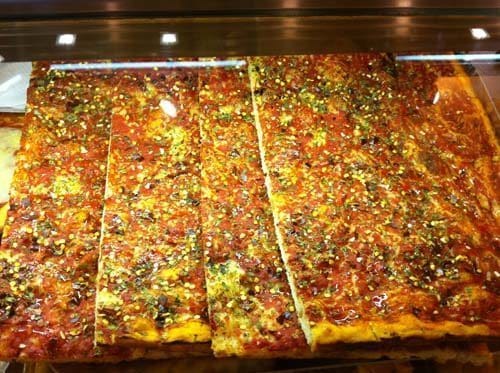 Today’s post comes from Carson, my cousin’s eight-year-old son. He loves food, especially pizza, and was struck by this photo of Forno Colapicchioni‘s pizza rossa picante when going through my iPhoto. I hope someday I have the chance to take him to this Roman bakery, but for now, we can just talk about it here in Jacksonville, Florida. Here’s what this young critic has to say: “It looks so good I wish it was less than 1 mile away right now. My mouth is watering it looks so good but it’s so far away. I would do anything just to have that pizza but instead of cayenne pepper, I want spicy pepperoni. And Katie told me the bakery is 5036.89 miles away to be exact. No wonder it’s famous. But for now I’ll fill up on Aunt Jojo’s spaghetti and meatballs. They’re delicious!”

Check out Carson’s previous guest posts on pasta and cheeseburgers.