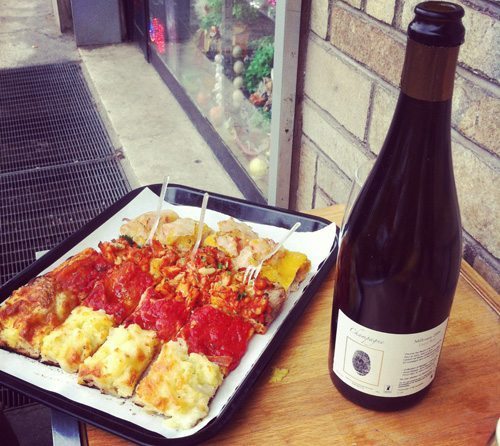 This morning on NPR’s Weekend Edition, I spoke to host Scott Simon about which beverages to pair with pizza during Sunday’s Superbowl XLVIII festivities. I eat tons* of Neapolitan-style Margherita and pair it with a classical method sparkling wine, either Champagne or Franciacorta, to enhance the gustatory experience. When there is no bubbly onhand, I reach for a smokey, mineral white from Campania like Greco di Tufo or a steely Loire Valley white. Drinking wine, both still and sparkling, can be a fantastic way to enhance the pizza experience, providing acidity or tannin where appropriate. Yet as soon as the interview hit the airwaves, I began getting emails questioning my judgement, which is fine–because I’m right–and asserting the primacy of pizza and beer together–which is wrong, because it’s limiting.

Of course there are plenty of brews which pair well with pizza–I mentioned a few in particular during the interview, but those were cut. Though before cracking open a cold on, take toppings into consideration. A Czech-style pilsner is a good, standard choice if you’re ordering lots of pizzas with varying toppings. But if it’s a cheese pizza with gorgonzola in the mix, consider a barley wine. Hoppy IPAs and APAs can match up well with spicy toppings. Seattle fans out there will get a kick out of drinking the city’s own Redhook Brewery’s Audible Ale, which was developed with input from sportscaster Dan Patrick. It’s food friendly and drinkable and kind of an awesome departure from Patrick’s past endorsing Coors.

You can listen to the NPR broadcast here.

For more Italian-oriented pizza and booze pairings, read this piece I contributed to Saveur last year. And for general Superbowl beer selections, check out Justin Kennedy’s most recent post for Saveur’s The Brew in which he pits Seattle’s Great Divide against Denver’s Elysian.