Where to Eat and Shop in Rome’s Esquilino District 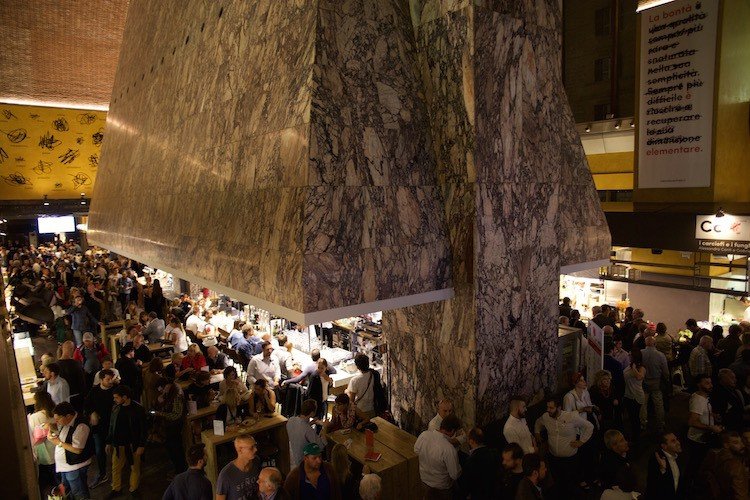 The highly anticipated Mercato Centrale food hall (above) opened on a sketchy stretch of Via Giolitti on the southern side of Rome’s Stazione Termini yesterday. The location, detached from the station’s tracks and main concourse, will likely be the biggest obstacle the market faces. Termini is a real nightmare and no sane person enjoys sticking around longer than absolutely necessary, but the surrounding Esquilino neighborhood, named for the Esquiline Hill upon which it sprawls, is one of my favorite parts of the city. I love this endearingly gritty, diverse district for its architecture, atmosphere, archeology, and dining destinations. It’s too early yet to know what impact the Mercato Centrale will have on its environs, but in the meantime, don’t miss out on this unique area of Rome. 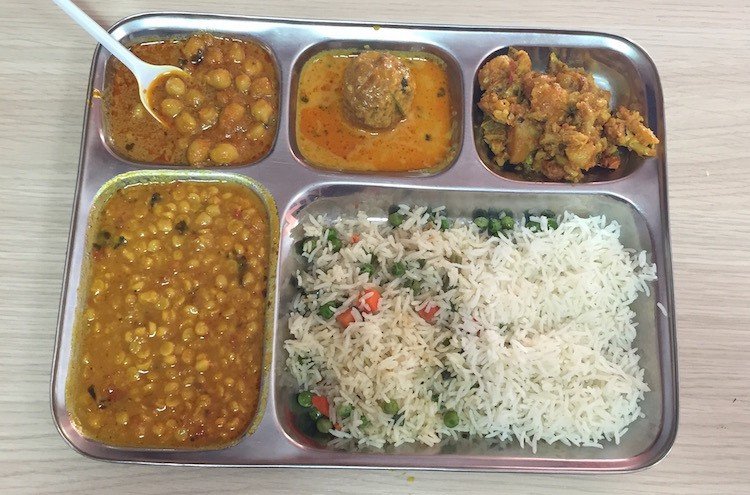 Janta Fast Food
Via Mamiani 11
+3906 446 0792
This Indian cafeteria and takeaway spot (formerly Kabir Fast Food) has been serving tasty curries, stews, and many vegetarian/vegan/gluten free dishes in a spartan dining room just off Piazza Vittorio since 1996. Start with fried vegetable samosas or pakoras and finish with one of the tooth-achingly sweet desserts, such as ras gulla or gulab jamun. 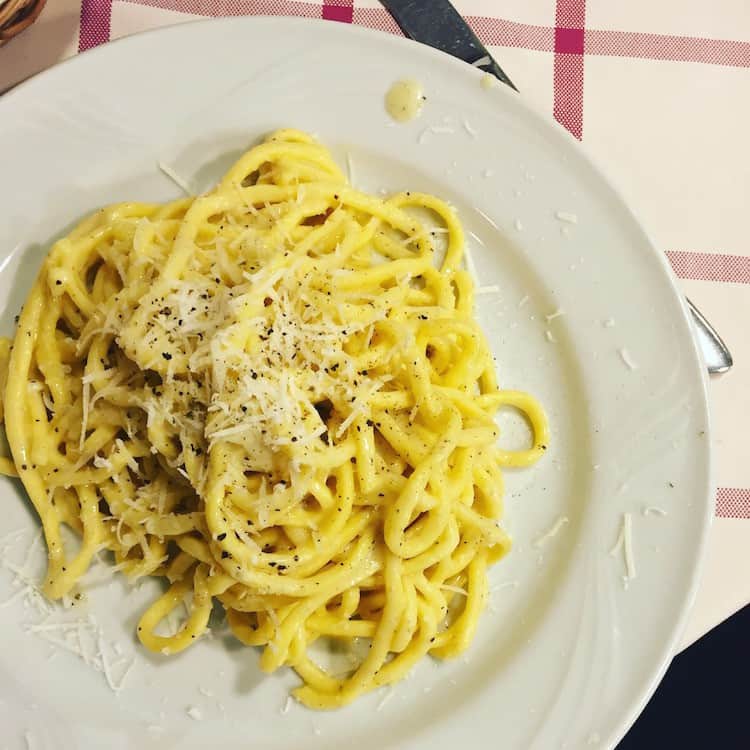 Da Danilo
Via Petrarca 13
+39 06 7720 0111
Danilo Valente and his mother Lina are known for their Roman classics like carbonara and cacio e pepe, the latter of which is tossed table side in a wheel of cheese. If you visit, you should order those, too. But never skip their Tuscany-inspired strozzapreti al lardo di Colonnata e pecorino di fossa, twisted pasta strands dressed with a tomato-based, fatback-laced sauce seasoned with tangy aged sheep’s cheese. While I personally love the Valente family, I have been a regular for over 10 years and am treated accordingly. Visitors are rarely afforded the same TLC, so for the best experience, book ahead and request a ground floor table so you don’t get stuck in the basement. 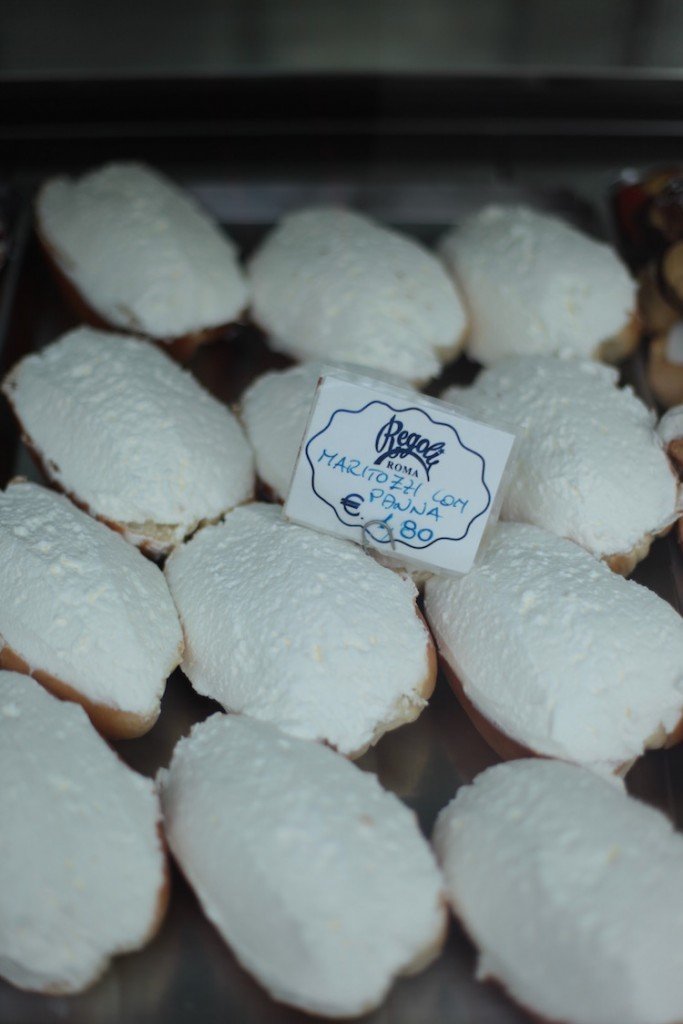 Pasticceria Regoli
Via dello Statuto 60
+39 06 487 2812
Pasticceria Regoli, a city institution opened in 1916 when the current owner’s grandparents moved to Rome from Tuscany. They slowly transitioned from charcoal sales to food service and today the pasticceria is one of the few traditional, quality shops left in Rome. Its maritozzi con panna (whipped cream filled buns) are fantastic and, though there is not seating in the shop, you can take these and other sweets next door to their recently opened cafe. You can check out more about this historic shop on my YouTube channel.

Trattoria Monti
Via di San Vito 13
+39 064466573
The Camerucci family, originally from Le Marche, serves food from their native region in this long-established restaurant near Piazza Vittorio. The staff is friendly, speaks English and they smile, not a given in the Roman service industry. Check out starters like olive ascolane (deep-fried and meat-filled olives) and sformatini (savory flans), first courses like tortello al rosso d’uovo (large ravioli filled with a loose egg yolk) and second courses with game and rabbit. The place is wildly popular with travelers due to the tremendous amount of attention it has gotten from the Anglophone press, so book well in advance. 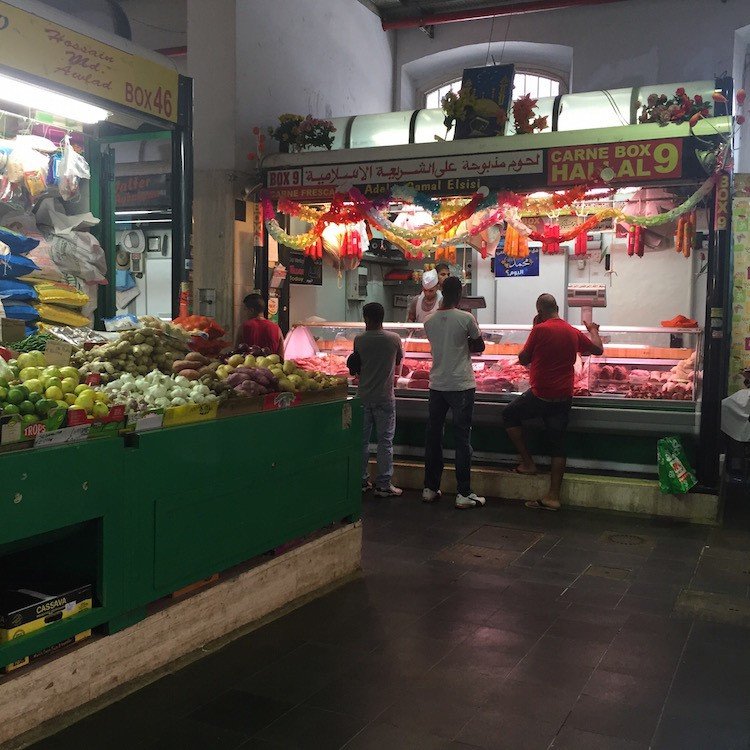 Nuovo Mercato Esquilino
Via Principe Amadeo
The Nuovo Mercato Esquilino isn’t so nuovo anymore, having moved to this indoor market space about a decade ago. The bustling and colorful market is a one-stop-shop for both Italian and foreign ingredients, where okra is sold beside artichokes and halal butchers coexist with stalls specializing in Eastern European salami. You’ll be able to find most everything you need for a spicy curry feast, Thanksgiving dinner or a Mexican fiesta. The place is a dazzling pastiche of colors, smells and languages and the best place in the center to see multicultural Rome at work. Open Mon–Sat 7:30-14:00.

Forno Pietro Roscioli
Via Buonarotti 46/48
+39 064467146
Pietro Roscioli’s bakery just off Piazza Vittorio sells sweet and savory baked goods while also serving as a tavola calda (cafeteria) with prepared dishes for dining in or taking away. Among the sweets, the brutti ma buoni, and tozzetti are highlights, whereas the pizza bianca (Roman flatbread) is best filled with thin slices of mortazza (mortadella). The vegetable dishes at the tavola calda are a good budget option and offer a break from all the carbs.

Domus Birrae
Via Cavour 88
+39 0697997570
This craft beer shop near Santa Maria Maggiore stocks more than 300 labels from Italy, the US and Northern Europe and hosts tasting events with top Italian producers. The front of the shop is filled with fridges packed with beers to take away or drink in the shop. Though there is no seating, just ask for a glass and feel free to stand and admire the myriad of brews. In the back of the shop, brewer’s equipment shares space with shelves filled with bottles from Italian brewers; there is a special focus on Piedmont, Italy’s premier brewing region. The staff is super knowledgable and ready to give advice to newbies or geek out with fellow craft beer aficionados.

What to do when you’re not eating 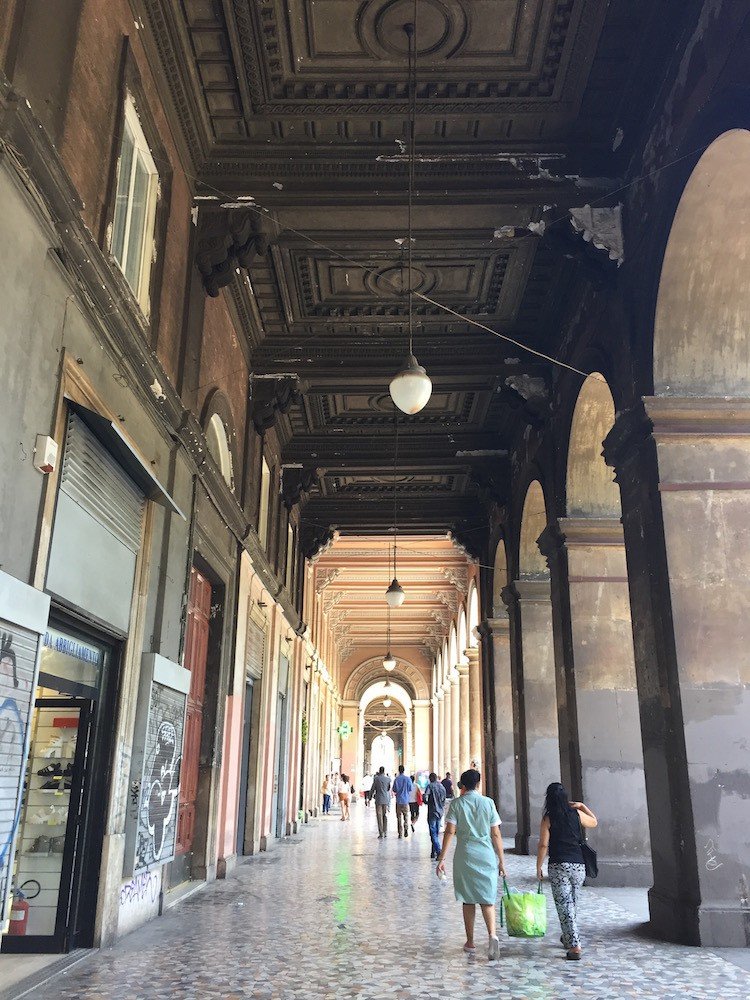 Piazza Vittorio Emanuele II (we just called it Piazza Vittorio), named for the king who unified Italy, is a broad square trimmed by porticoed buildings. The piazza draws heavily from the architecture of Piedmont (the king’s native region) and forms the centerpiece of a planned late 19th/early 20th century neighborhood that sprawls over the Esquiline Hill. It takes a bit of imagination to visualize the tarnished buildings in their original splendor, but they were magnificent. Still are IMO. 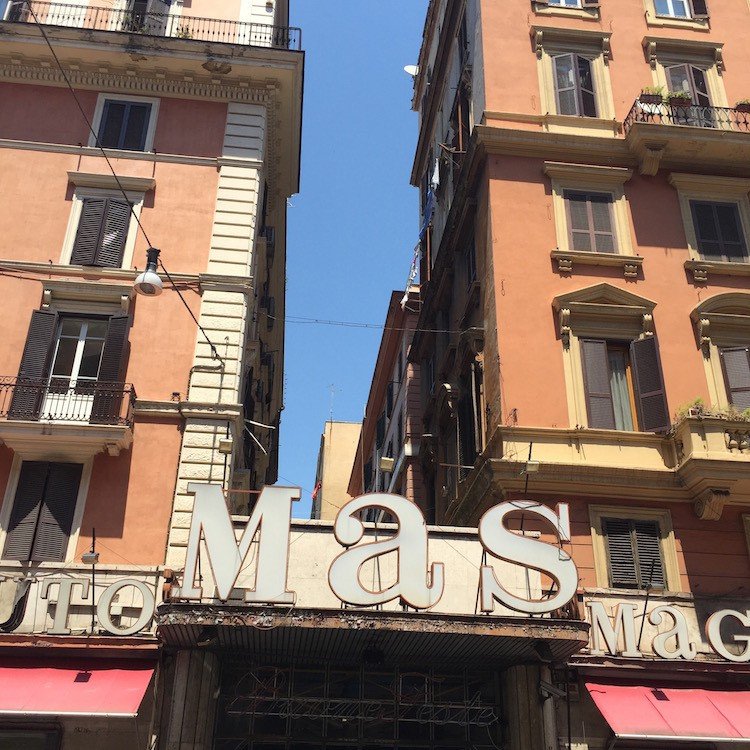 Just off Piazza Vittorio, MAS (Magazzini allo Statuto), is a cavernous discount store that sells home goods galore and just about every imaginable type of outdated clothing and accessory. This mothball-scented relic has a massive collection of Zubaz, cubic zirconia jewelry, tasseled garments, and other things you don’t want, as well as tchotchkes you didn’t even know you needed until they presented themselves in MAS’s hypnotic fluorescent lighting. 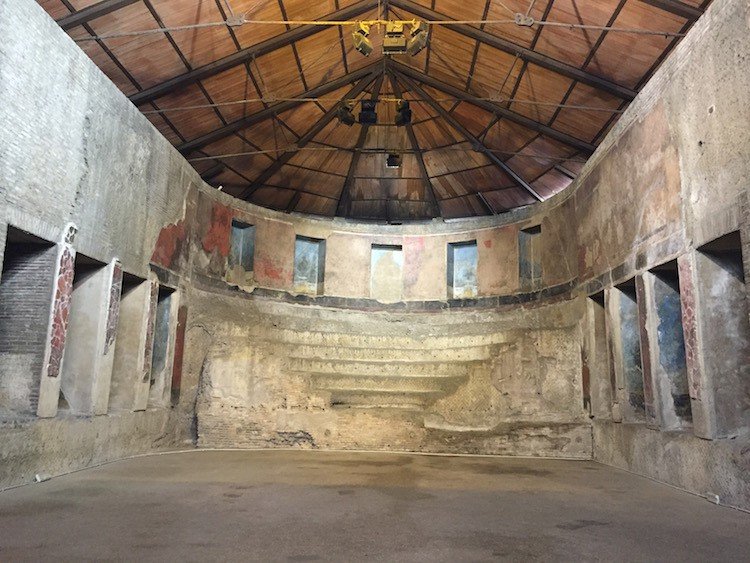 The Auditorium of Maecenas is composed of frescoed ruins from an ancient country estate. The partially buried structure on Via Merulana was uncovered in 1874 and can be visited with a special booking via the city’s culture office (I often lead private tours there). In the summer, the archeological site and surrounding garden host events. 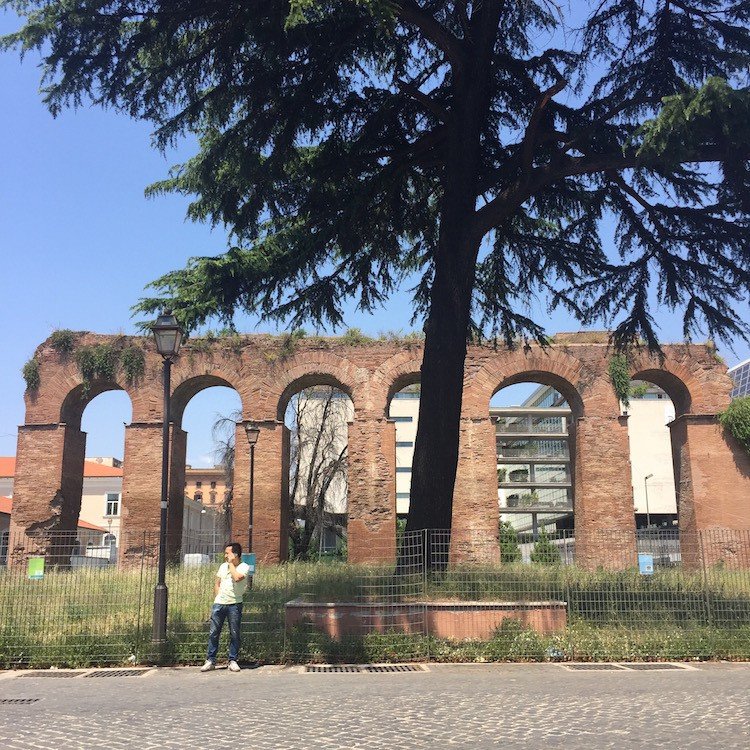 The supporting arches of the 1st century BC Aqua Julia are visible in Piazza Guglielmo Pepe opposite the pretty pink Art Nouveau-style facade of Teatro Ambra Jovinelli. Other surviving works in the area related to Rome’s ancient water supply include the so-called Trophy of Marius, a monumental brick fountain in Piazza Vittorio, and aqueduct branches running through Piazza di Porta Maggiore. 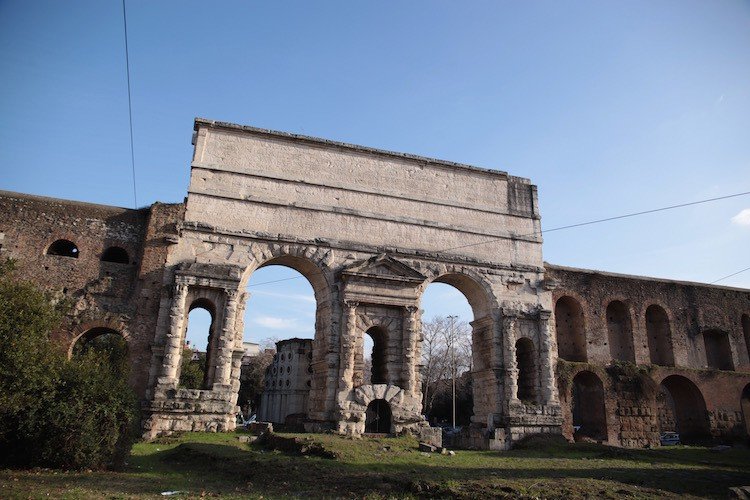 Porta Maggiore, a set of limestone arches built by Claudius in the 50s AD, was ancient Rome’s gateway to the eastern suburbs. Today, the area is a transit hub where trams and the Giardinetti train line converge and shuttle commuters to and from central Rome. Just outside the rusticated limestone gate, the Via Prenestina and Via Casilina head to Pigneto, Torpignattara, Centocelle, Quarticciolo, and other planned 20th century residential districts. 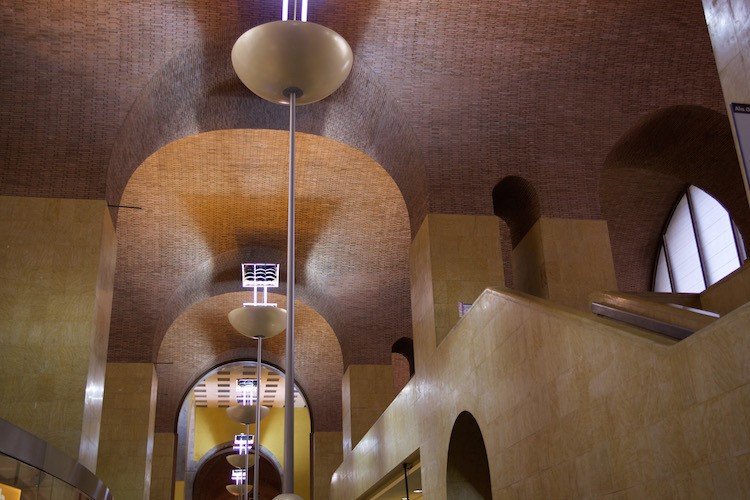 The experience of renting a car at Stazione Termini is unpleasant. The only remotely soothing thing about the process are the leaping vertical vaults and stone accented architectural elements that contain the least efficient rental agencies on Earth.

See more of the district on my YouTube Channel below.

Want to stay in Esquilino? Check out properties on Cross Pollinate! The newish boutique hotel Fifteen Keys is cool and close.