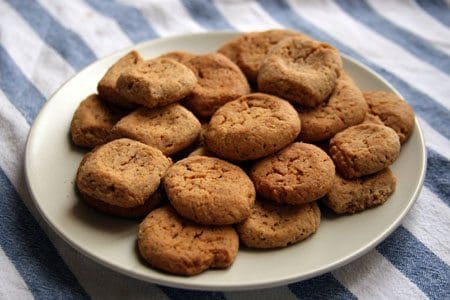 On Saturday I swung by my favorite cookie shop in Rome, the over century-old Biscottificio Artigiano Innocenti on via della Luce in Trastevere. They had just taken their famous fave dei morti (beans of the dead) out of the oven. These squared off cookies made from bits of almond, sugar, butter, flour, and eggs are a typical treat associated with All Souls Day (il giorno dei morti) which is celebrated every November 2.

While the holiday derives from a Catholic tradition, it is still widely celebrated in spite of Rome’s increasingly secular nature. The rituals associated with this and other religious festivals are so ingrained that it is difficult to lose them even after their religious connotations wane. So today, people will still eat fave dei morti even if they don’t light a candle in church or trek out to the cemetery to pay their respects to loved ones.

I, for one, will celebrate the day of the dead with the few fave I’ve got left (a half-kilo of anything doesn’t last long in this house). I will also spend some time pondering the evolution of ritual foods and their association with the cult of the dead. If this sounds loco, hear me out. I wrote my B.A. thesis on a sarcophagus in the Capitoline Museums, so Roman death is kinda my thing.

In Rome, there is a long-standing tradition of venerating the dead on prescribed days. In antiquity, February 13-22 marked the Parentalia, a festival in which people brought garlands, pinches of salt, and violets to the tombs of their loved ones. Throughout the Middle Ages, the relics of saints were celebrated on their feast days. And today, in a city that is more secular than ever, the Catholic holiday All Souls Day is celebrated with designated foods.

Now, I am not very religious (understatement) but I’m happy to take part in traditions as long as I can eat. I’ll do it today and again at Carnival, on the Feast San Giuseppe, and again at Easter.