Skip to content
Home/Budget Dining in Rome, 2017 Edition
Previous Next 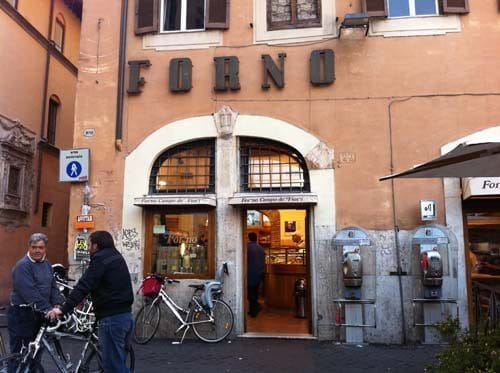 UPDATED FOR LATE 2017: In the past week I have gotten quite a few emails from travelers and abroad students inquiring about budget dining in Rome, so I thought now would be a good time to share some tips. My previous posts on the subject are way outdated, so here is a brand new list of places where you can eat very good food without breaking the bank (and don’t miss this post about sightseeing on the cheap):

Mordi e Vai at Box 15 in the Testaccio Market has become an institution since it opened 5 years ago. Sergio Esposito sells incredible brisket, pajata, tripe, and kidney sandwiches there–vegans rejoice! The braised artichoke is ace, too–all for €5 or less. There’s a second location in San Giovanni.

Forno Campo de’ Fiori: This legendary bakery serves some of the best pizza bianca in town (their other pizzas aren’t quite as satisfying). Sandwiches are served in the adjacent annex for around €4.

Antico Forno Roscioli: A hearty slice of some of Rome’s best pizza bianca costs less the €1, while pizza by the slice costs quite a bit more. Still, you can try a few types of pizza for under €5, or grab some of prepared food like pasta and roasted meat at the back. Prices vary, but you can eat a couple of courses for around €12.

Pizzarium: Rome’s best pizza by the slice isn’t always cheap—I once spent €40 on lunch–but if you stick to pizzas with simple toppings like potato and mozzarella or plain tomato, you can eat here for €5 or less. Just let the person serving you know that you don’t want to spend a lot, give an amount, and they will work with you.

Panificio Bonci: I visit daily for pastries, cookies, or pizza con la mortazza (a sandwich made of flatbread and bologna). The bakery also sells roasted chicken (one of my top bites in town!) to go. It’s magic.

Mercato Centrale: There are more than 15 stalls in this food hall in Termini Station but for the best food focus on Bonci’s Bakery and Trapizzino at opposing ends of the complex.

Janta Fast Food: This Indian cafeteria and takeaway spot (formerly Kabir Fast Food) has been serving tasty curries, stews, and many vegetarian/vegan/gluten free dishes in a spartan dining room just off Piazza Vittorio since 1996. Start with fried vegetable samosas or pakoras and finish with one of the tooth-achingly sweet desserts, such as ras gulla or gulab jamun.

C’e’ Pasta…e Pasta is a cafeteria near the Trastevere Station serving kosher Roman Jewish classics like concia and pezzetti fritti. As the name implies, there is also lots of pasta.

Trapizzino: This growing fast food chain got its start in Testaccio and has now expanded to several locations including Ponte Milvio, Mercato Centrale, and Prati. The name trapizzino is a play on words, combining tramezzino (a triangular sandwich served in cafes) and pizza. Unlike the calzone or calzoncino, the bread for a trapizzino is baked separately, then stuffed with the requested filling to order. The fillings are mainly rooted in the Roman classics, but the concept takes cues from other Italian cities where street food culture is strong. They are priced around €4.

Forno Pietro Roscioli: Not to be confused with Antico Forno Roscioli, Pietro Roscioli’s bakery just off Piazza Vittorio sells sweet and savory baked goods while also serving as a tavola calda (cafeteria) with prepared dishes for dining in or taking away. Among the sweets, the brutti ma buoni, and tozzetti are highlights, whereas the pizza bianca (Roman flatbread) is best filled with thin slices of mortazza (mortadella). The vegetable dishes at the tavola calda are a good budget option and offer a break from all the carbs.

Be.Re.: For under €10 you can get a craft beer and a Trapizzino at this excellent pub in Prati. It’s a great place to stop for a snack en route to the Vatican Museums a mere 5 minute walk away.

Open Baladin in central Rome is great for a beer and a plate of potato croquettes (€5 each). Get the cacio e pepe flavored croquettes, please.

Mesob in Pigneto/Prenestino is one of the city’s best restaurants. Eat spectacular and authentic Ethiopian cuisine here for around €12 a head.

It’s tough to eat a whole meal (antipasto, primo, secondo, contorno, and dolce) for under €40 anywhere in town these days. And frankly I would be very suspicious of what kind of ingredients are going into such a cheap meal. However, it’s unusual for Romans to go out for such blow-out feasts these days. Unless it’s a special occasion, locals pick 2 to 3 of the aforementioned courses and you can, too, which means you can eat awesome meals at Tavernaccia da Bruno, Cesare al Casaletto, and other places for €30 or less per person and still have an excellent, affordable meal. Just be respectful of the fact that ordering just an antipasto or just a pasta is rude, so if you really want to stay lean without insulting the proprietor, order a primo or secondo and a vegetable side dish at the very least.

I have a whole guide from the sadly defunct Lucky Peach, which I posted here. You can eat excellent pizza at any of the places listed for under €20 including beverages. It’s under €10 for a pizza and a beer at Pizzeria Ostiense and Da Remo.

You can save money shopping at markets (as opposed to supermarkets). Check out Piazza San Cosimato, Mercato Esquilino, and Mercato di Testaccio, Mercato Trionfale, and the other 100 plus markets in town.

Rome has the world’s best gelato (though not in any of the places your guide books tell you about!). My favorites are Al Settimo Gelo, Gelateria dei Gracchi, Il Gelato di Claudio Torce’, Gelateria Fatamorgana, Fior di Luna, Gelateria del Teatro, and Gelateria Gori and all serve two scoops of all-natural gelato for €2.50 or less.