Skip to content
Home/Driving the Basque Coast
Previous Next

Getaria moments before a storm.

After a few days in Donostia-San Sebastián, we gathered all the advice we had received from readers, laid out the map, and decided to drive the Basque coast from east to west. We had taken the (quicker) internal road on the previous leg of the journey and missed out on all the lush mountain terrain and vertiginous panoramas the Basque coastline has to offer.

Our first stop was Getaria, a town that must be one of the prettiest villages in Spain. The small medieval quarter hugs a tiny port, from which a path leads to the top of the adjacent Mouse Island. In the town itself, there are a number of restaurants and each of them has a charcoal grill outside. They were just getting warmed up for lunchtime when we made our departure amid a torrential downpour. 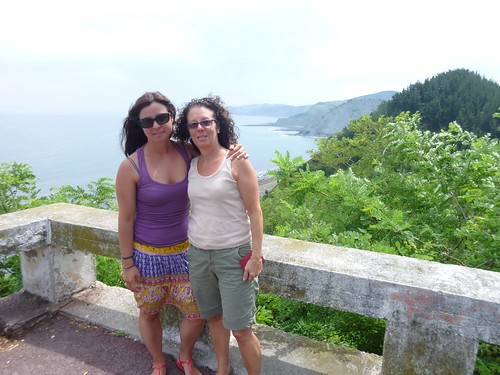 Me with “Mamma Food” as she is affectionately called by Italian readers.

The drive to Zumaia, around 10km further west, was along a dramatic coastal road that trimmed rocky cliffs. There were several little parking areas where visitors could stop for a look over the sea and to snap a few photos. This produced the only proof that Mamma Parla and I were on this journey together. We have got to get better at documenting our trips!

Next were Deba and Ondarroa, both immaculate little fishing towns with water so clean, many swam in the port! We took an inland detour through spectacular farmland to Lekeitio, possibly my favorite place in Euskadi.

This gorgeous seaside town was encircled by vegetable gardens on its upper slopes. Down by the port, a sandy beach stretched along a protective cove. We were pleasantly surprised to find most of the people in and around town were locals (where were all the tourists?!). We immediately fell in love with the place.

Gardens surround the town of Lekeitio.

We arrived around lunchtime and planned to follow the dining advice we had gotten on Twitter, but we couldn’t find one place and got distracted by pintxos on the way to the other. At around 1pm on a Sunday, Lekeitio’s streets are packed with locals who move from one pintxos bar to the other, grazing on fish, vegetable, and ham-based finger-foods washed down with beer and txakoli.

We joined the crowd and hit up 5 pintxos bars. By 3:30, most places were winding down, but Txalaparta Taberna was still going strong. We wandered into this dive bar where people sat watching tennis on television while devouring heaps of snails. We ordered some, too, and they were delivered with two needles, which we used to spear and eat the snails. Afterwards we wandered to the beach for a rest and plotted our return.

The beach next to Lekeitio’ port.