Skip to content
Home/Forgotten Flavors, Found in the Alto Casertano
Previous Next

Speeding down the A1, the Italian traffic artery playfully dubbed “The Motorway of the Sun”, we exited at Santa Maria Capua Vetere, slowing our pace to navigate the series of increasingly curvy roads that led to our destination, Agriturismo Le Campestre, an agriturismo buried deep inside Campania’s Alto Casertano sub-region. Most visitors to Campania continue on the A1 to Vesuvius, the Amalfi Coast and the ancient cities that fill the wide crescent bounded by the Sorrentine Peninsula and Naples. But Chris and I aren’t most visitors and our plan was to celebrate our first anniversary with the undiscovered land-locked flavors of Campania’s interior. 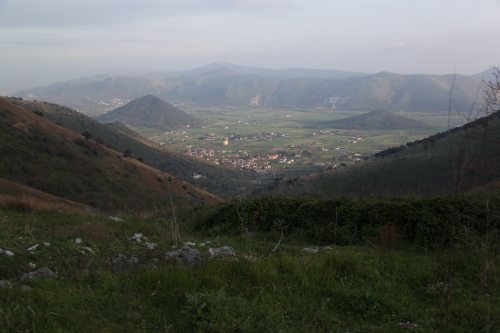 Le Campestre is owned by the Lombardi family, ambassadors for a revitalized regional cuisine that, after years of decline and neglect, is experiencing a full-on renaissance. After decades in Belgium, the Lombardis returned to their native land where they have married their passion for their agricultural ancestry with their exposure to northern European sustainability. In doing so, they have created a peaceful retreat where they nourish visitors with their own wine, olive oil, cheese, bread, produce and livestock. 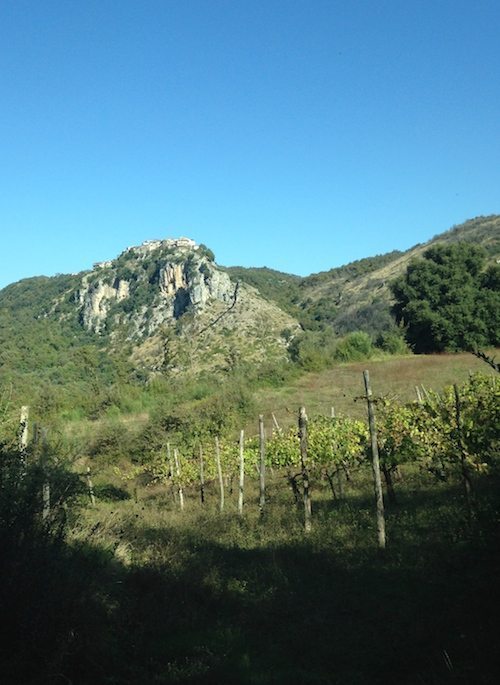 At Le Campestre, citrus groves and olive orchards give way to pastures where sheep graze on a diet of spontaneous herbs. Their chickens supply eggs and poultry, while their pigs of the Nero Casertano heritage breed appear on the table as cured meats and mains dishes. The quality and integrity of their ingredients attracts overnight guests like me and Chris to their three well-appointed rooms, but their on-site restaurant serves a larger audience of locals who come to imbibe the flavors of their land and its past. 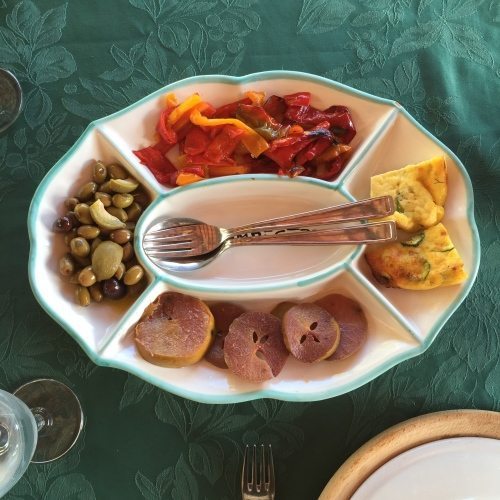 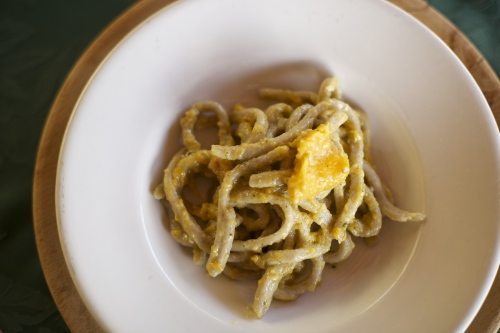 The family beamed with pride as they recounted the history of the cheese they incorporate into the pasta condiment; conciato romano, a sharp, wine-washed, ewe’s milk cheese, is aged in terracotta vessels, a process they trace back to pre-Roman times. It verged on extinction before the Lombardis helped to revive it. Conciato romano reappeared at the end of the meal, paired with baked annurca apples. 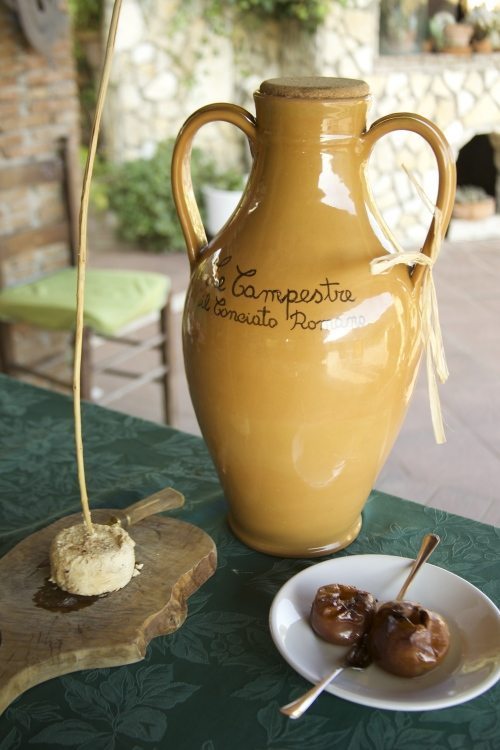 The Alto Casertano’s ancient flavors have also been championed by Franco Pepe at his pizzeria in nearby Caiazzo. Since opening Pepe in Grani in October 2012, Franco Pepe’s pizzeria has become nothing less then a pilgrimage destination. We joined the ranks of his disciples on our fourth visit, ascending a stone alleyway towards the pizzeria, a 3-storey stone building in Caiazzo’s dense and diminutive historical center. Inside, Franco and his team were hard at work at the domed, wood-burning oven. They worked in unison as pizza after pizza was prepared, topped, baked, and whisked away to the dining room. 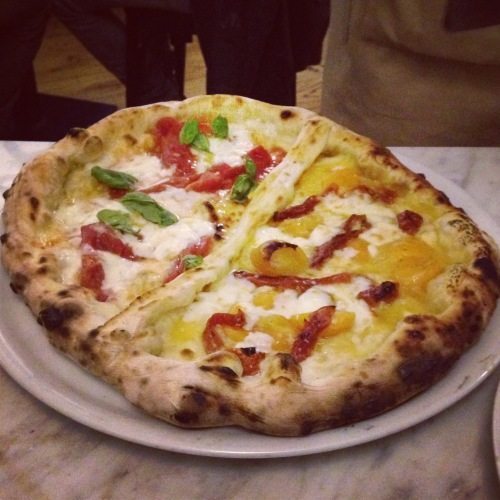 Of the 430 pizzas Pepe in Grani served that night, 6 landed on our table, each one delivering the flavors and aromas of the region. A fried pizza was followed by one topped with heirloom tomatoes and mozzarella. Cured rabbit was paired with ribbons of celery. The final pizza featured sharp and tangy conciato romano and fig preserves. Each topping was carefully chosen to evoke Pepe’s —and Le Campestre’s—native land and each was doused generously with extra virgin olive oil from the Petrazzuoli olive orchards in nearby Ruviano. 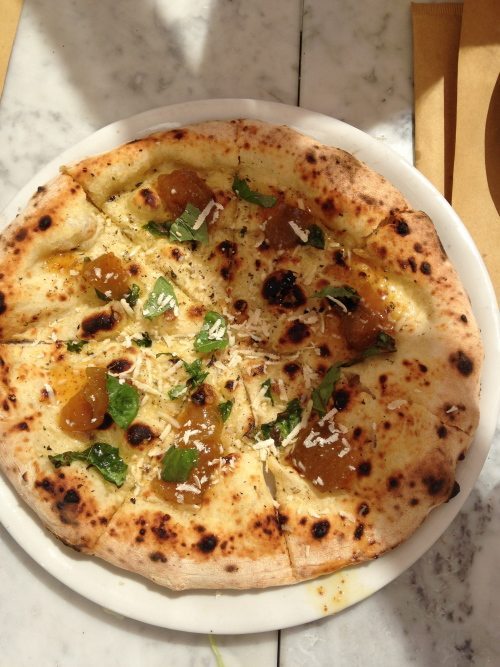 At Petrazzuoli, thick and knotted ulivi secolari (centuries old olive trees) bear fruit every fall. Olives are harvested by hand, then pressed. The resulting unfiltered oil is fruity, green and herbaceous. Just as with conciato, a revived appreciation for quality, cold pressed oils has grown in this part of Campania. 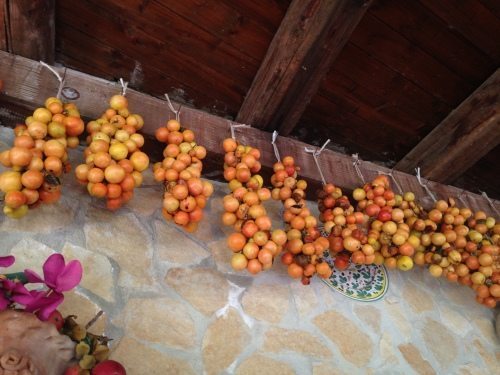 Tomatoes, the region’s other famous fruit, have also seen a resurgence. Beginning in the 1950s, heirloom tomato varieties were forgotten as residents abandoned their fields for the cities. At La Sbecciatrice brothers Lino and Domenico Barbiero are dedicated to protecting native produce species and have a particular interest in the pomodoro, which arrived in the region in the 16th century and is now virtually synonymous with Campanian cuisine. La Sbecciatrice offers varieties with flavors so varied that no two are suited for the same use. Their summer crops are served sliced, dressed in oil, tossed with pasta, seasoned with salt or bottled for the winter, each offering complexity that will draw Chris and me back to the Alto Casertano year after year.