Skip to content
Home/Gateway to Basque Country: Gasteiz
Previous Next

Modernity meets the middle ages in the old quarter.

Two weeks in Basque country are underway and, as I expected, I quickly realized that 14 days are barely enough to comprehend Bilbao, much less the region. How do I do it all? Fit it all in? Eat everything I desire? Well, I can’t. And, frankly, I’m glad. I wouldn’t want to visit a place where I could exhaust the culinary possibilities in such a short time. This is among the many reasons Basque Country is such an extraordinary destination. This is the reason I am already plotting future trips.

But, for now, I’ll focus on this journey and our experiences in the first few days on the road. I met Mamma Parla at the Barcelona airport on Sunday morning. Her airfare and our car rental from BCN was by far the cheapest we found, so we sucked up the 5-hour drive and used Barcelona as our jumping off point. NB: Santander, Bilbao, and Hondarribia are all served by airports that would make much better arrival destinations.

The drive from Barcelona to our first destination Vitoria-Gasteiz (Vitoria in Spanish, Gasteiz in Basque) was spectacular. Rolling hills peppered with olive orchards gave way to arid terrain, which morphed into vineyards. The temperature hovered around 40C/100F. Considering the heat, it wasn’t such a bad thing we spent the day in the car; being outside would have been excruciating.

When we got to Gasteiz at around 6, it was still sweltering. As we checked into our hotel beside the Parque de la Florida, the band started playing in the park and scores of old Gasteiztarras took to the square and danced in unison to traditional songs. They stayed at it for hours, yet barely a bead of sweat was seen on a single ancient forehead. I cannot prove it but I believe Gasteiztarras have superior cooling systems. Mamma Parla and I watched for a bit, then peeled ourselves off our benches and walked a block north to Sagartoki (Prado 18), a popular bar famed for its pintxos (Basque finger food, not to be confused with tapas). We ordered a couple of glasses of txakoli, an acidic local white wine, and when all was said and done, we had tried every pintxos on the bar. 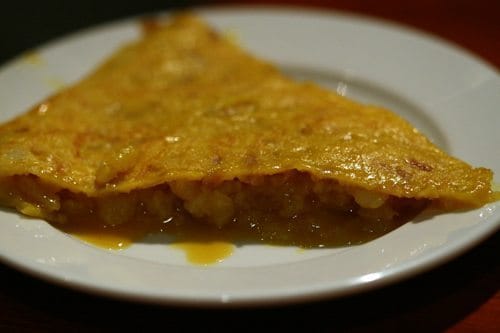 Thanks to the diffusion of pintxos throughout Spain, I already had lots of experience ordering them elsewhere and knew the drill, which is not exactly intuitive. Damian Corrigan lays it all out much better than I could here.

Some of the highlights were the tortilla (a sort of omelette made with potatoes and onions), Serrano ham with fried green peppers, and tuna sandwiches with pickled peppers. Each pintxos cost around €2. The wine just €1.55 a glass. Going home to Italy will be quite bitter indeed.

The next morning we walked around town a bit more, though the infernal temperatures made enjoying our excursion nearly impossible. We had lunch at Arkupe (Calle de Mateo Benigno de Moraza 13), a rather elegant yet unpretentious restaurant near Gasteiz’s main square. The cuisine is modern Basque, with lots of great produce and interesting flavors. The cod carpaccio with anchovy ice cream starter was excellent and the rest of the meal was very good with great service.

Though our time in Gasteiz was limited, we enjoyed the quiet, medieval quarter, the wide open plazas nearby, and its thoughtful Basque cuisine. Overall, it was fitting introduction to Basque Country and culture, which would intensify in our next stop: Bilbao…