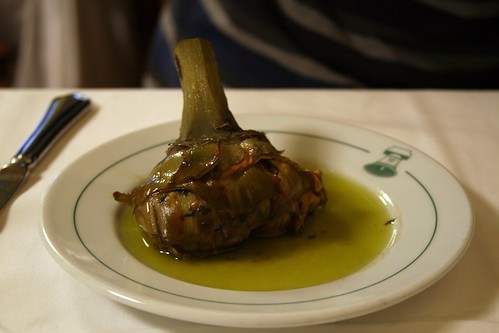 Carciofo alla romana, artichoke braised with oil and herbs, is a winter and spring dish.

Visitors to Rome have long understood that among the city’s highlights, ranking right up there with the Pantheon or the Colosseum, are its typical dishes. Some are seasonal (carciofi alla giudia, pizza con prosciutto e fichi), others are not (spaghetti alla gricia, trippa alla romana), still others could go either way (some fritti are, some are not).

With all this variety and seasonality on its side, Rome appears strongly rooted in tradition, impervious to change. But with roughly 9 million visitors annually and nearly 4 million residents in the metropolitan area, the city and its customs are threatened every day. Consumers demand out of season dishes, leading restaurants to serve them. Residents demand value and convenience, spurring the rise of supermarkets. Throw in globalization, a corrupt Minister of Agriculture, a farming crisis, and a shift in local food sensibilities, and Rome’s gastronomic future is in serious trouble.

As a visitor (or resident for that matter), there are several things you can do to lessen your adverse impact on the city. Here are a few ways to become a responsible food tourist in Rome (and elsewhere!): 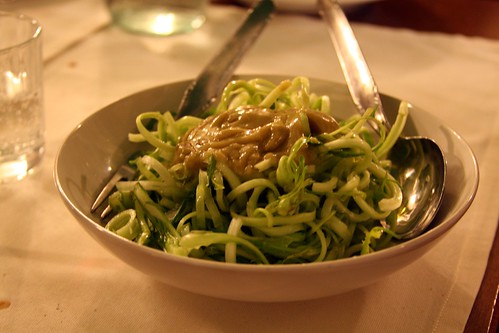 Avoid chains and franchises.
Aside from the unfortunate presence of The Hard Rock Cafe, McDonalds, and Burger King, Rome has been rather resistant to American culinary imperialism. However, there are still a number of Italian chains operating in the center like the tragic Blue Ice gelateria, and Spizzico on the Via del Corso. They offer bad product made with terrible ingredients, chemical colorings, and preservatives. The Autogrill on major Italian roadways and food service at rail stations and on the trains themselves are also run by large corporations. Avoid! Prepare for a road trip or train travel by picking up some fresh sandwiches made at a locally owned alimentari.

Frequent restaurants that source locally.
In the past few years, a growing number of restaurants have been dedicated to using local products, from produce and olive oil to meat and cheese. Checchino dal 1887 (Via di Monte Testaccio, 30) and Palatium (via Frattina 94) have been at this for years, and now many other places are doing it, too. Back in June, I wrote this piece for the New York Times on locavore dining in Rome. In addition to the places mentioned in the article, the restaurant at Citta’ dell’Altra Economia in Testaccio also serves food prepared with locally sourced ingredients. 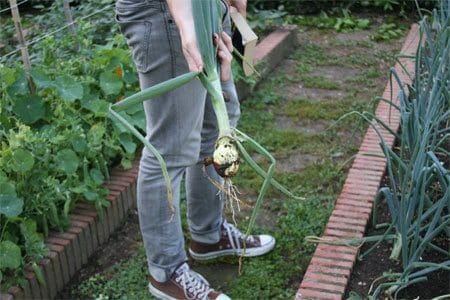 The RSFP garden at the American Academy in Rome.

Get involved with the Rome Sustainable Food Project.
The Rome Sustainable Food Project, based at the American Academy in Rome on the Janiculum Hill, is a joint venture between the AAR and Alice Waters that uses fresh, seasonal, organic products to create nourishing meals for the Academy’s fellows and visiting scholars. A 50 euro donation to the Friends of the American Academy in Italy gives you the opportunity to have lunch at the AAR with up to 10 guests. Become a friend here.

Respect the seasons.
Just because you want a deep fried artichoke doesn’t mean you get to have it. I recently got into this discussion on the Chowhound Italy board when I castigated someone for ordering carciofi alla giudia at Sora Margherita (one of the worst places around, by the way) in July. Another reader came to the offender’s rescue, stating, “For those of us who are not in Rome year-round, the production of fried artichokes out of season even if from non-local artichokes is appreciated”. This statement is wrong on so many levels. If you don’t know when Roman artichokes are in season (February-May), that’s one thing (see next tip), but if you knowingly order out of season dishes, you are being an irresponsible food tourist. Creating demand for out of season produce has significant ramifications, both for the local culture, as well as for the environment. If you must have a deep fried treat from the Roman Jewish tradition in July, pass on the carciofo alla giudia and indulge in fiori di zucca!

Learn the seasons.
With Rome’s incredible biodiversity, it may seem intimidating to learn when each fruit and vegetable is in season. To make the process easier, take a spin in a produce market (Testaccio, San Giovanni di Dio, or Citta’ dell’Altra Economia; NOT Campo de’ Fiori which is one of the worst places on earth to see what’s local or seasonal). Farmers markets like the Mercato di Campagna Amica del Circo Massimo (on hiatus until September) and the Roma Farmer’s Market in the ex-Mattatoio are other destinations for finding what’s local and in season. 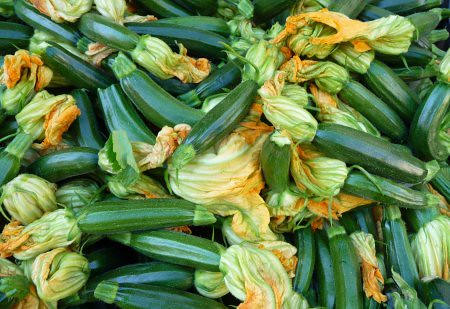 Summer zucchini at a Roman market.

Here is a list of some local produce and when to look for it:

These tips should get you started on responsible food tourism in Rome, but they are equally valid for other cities. Let me know your thoughts and if I have missed anything!