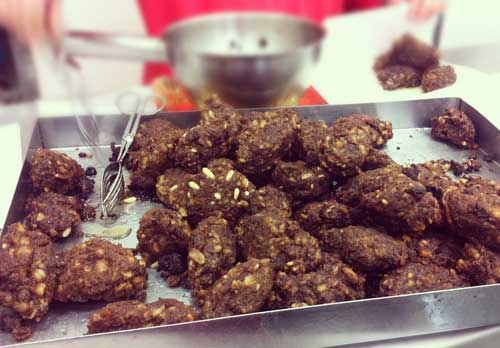 Rome’s Jewish community has a rich and flavorful culinary tradition that spans 22 centuries and encompasses native Roman, as well as Spanish, Libyan and Sicilian influences. Sweets are particularly important–try Boccione Il Forno del Ghetto and Mondo di Laura for proof–and during Pesach, one of the community’s best sweets is prepared. These blink-and-you-miss-them treats are called pizzarelle and the maleable honey-soaked cookies are made from moistened matzo mixed with eggs, sugar, raisins, cinnamon, and orange zest.

The amalgamation is formed into fist-sized wads and deep fried, then rolled in honey. Pizzarelle time comes but once a year, so be sure to stop by Boccione Il Forno del Ghetto in Rome’s Jewish Ghetto (Via del Portico d’Ottavia 1) March 28 or 29 or you’ll be stuck waiting for them until Passover 5774!